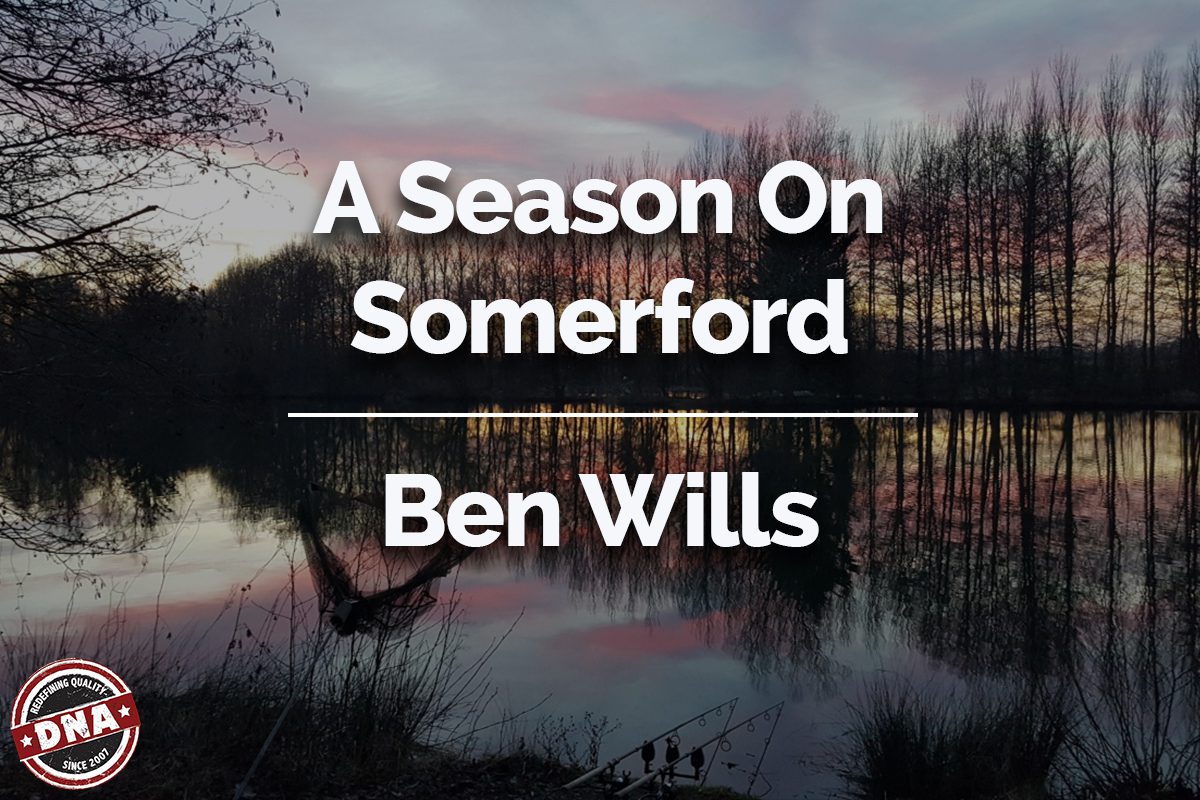 A Season on Somerford

It was whilst perched on my bedchair looking out across the shimmering surface of the secluded lake that I saw a carp roll, closely followed by another. Obviously my confidence began to climb; the carp had showed close to the zone and I had my hookbaits in the area. “It’s only a matter of time,” or so I thought. As the session progressed, the bobbins remained motionless – this would be the same story for the following few trips. 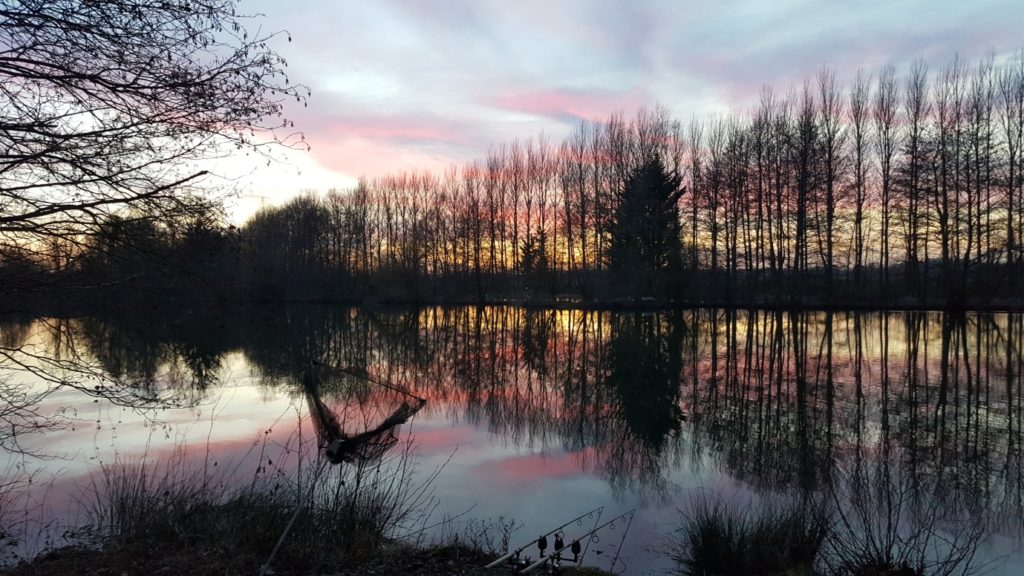 Scanning the water at dusk during an early trip

To give you some background on Somerford, it is around five acres in size and was originally dug to provide irrigation to the neighbouring farm. At my time of fishing there, it held a stock of around 65 carp that hadn’t been subjected to massive angling pressure as so many are these days. It had a reputation for being tricky. In fact, on my first session, whilst I was loading the barrow, a member came over to great me and, although I can’t recall the entire conversation, the gist of it was I was going to find the venue hard, but he was kind enough to offer me some advice. I’ve always been one to find things out for myself, so logged his information and continued undeterred.

After my first few sessions had ended in disappointment, even when I felt I had got the location part of the equation right, I decided I needed to make changes. The first thing I wanted to do was settle on a bait and stop introducing different things. Being predominantly a boilie angler, I wanted to pick one and stick with it throughout the campaign. I decided to go in with Secret 7. As soon as you open the bag, the smell hits you; it is so unique and just screams carp. I also felt it might be different from what others had been using.

Once my first delivery arrived, I was soon on my way up the lake for a walk around, armed with a few handfuls of the S7 just encase I stumbled upon an opportunity to gauge the fish’s reaction. I had previously seen a few fish sitting under a snag bush, so with fingers crossed, I hoped they would be in residence this time. I made my way around and crept into position. I peered into the water and smiled to myself, as I was greeted by the sight of three carp, two mirrors and a character of the lake, the Ghostie. I crumbed up a couple of the baits and dropped them in as delicately as possible. As the bits of boilie fell through the water, I noticed instantly the fish began to twitch and become more active. As the first few pieces hit the cleaned bottom, one of the mirrors turned and took the bait without hesitation. Before long all three were grubbing around looking for every last bit. It was great to see the carp have an instant reaction to the bait, and over the next 15 minutes or so I continued to feed the carp small pieces of S7 until they finally decided to drift off into open water and out of sight. To me, this was part of the puzzle solved. I deposited what bait I had left under the bush and made my way home feeling positive about what I had witnessed.

A lot of my sessions were either work overnighters or 24-hour trips, as the lake was fairly local to where I lived at the time, which made it easier to drop in frequently. One thing I had noticed quickly was the fish seemed wary of feeding on blatant patches of bait and would come in attracted by the scent trail, but bolt off before feeding. After seeing this I mainly fished pop-ups or wafters over a light spread of boilies to arouse any suspicions. After each session when the lake was quiet, I would spread liberal amounts of Secret 7 on to areas I had seen feeding activity. I wasn’t looking to bait a spot in the usual way, but more to let the fish feed unpressured and learn to accept the bait I was applying as a safe food source. I also soaked the baits in Betastim and S7 liquids, which I felt would only help with attraction.

Soon my efforts began to reap rewards. I managed more than one carp on a couple of occasions, with the odd bite coming in the middle of the day. Although the lake’s residents weren’t going to break any records in terms of size, they were immaculate specimens with mouths that looked untouched by any previous hook-hold. With the lake remaining quiet, I was perfectly content and set my sights on adding the lake’s largest mirror and common to my album. 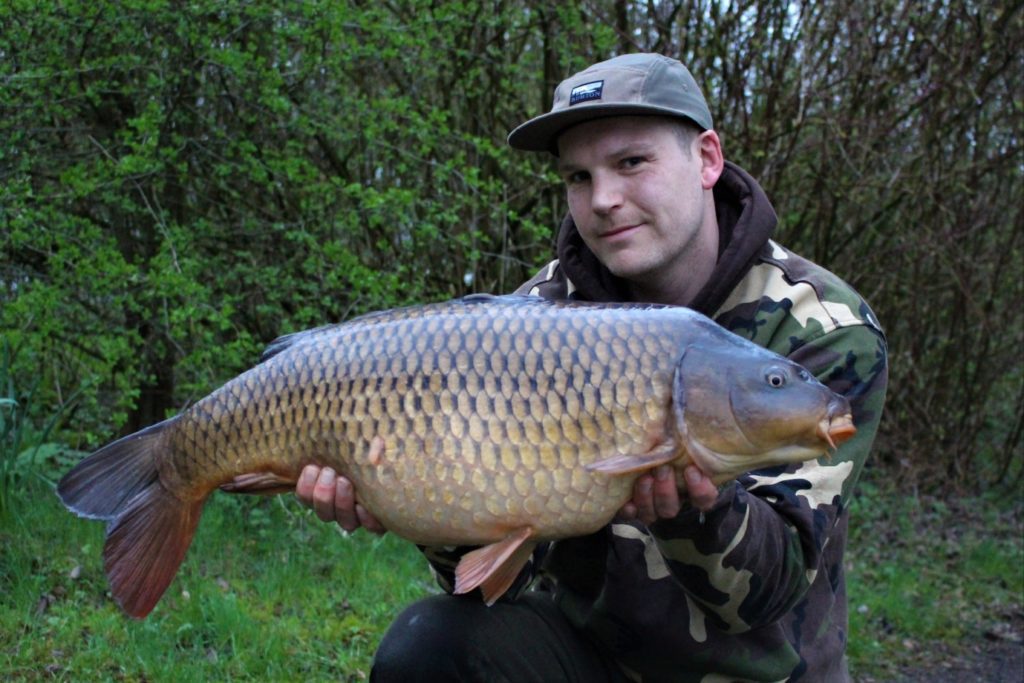 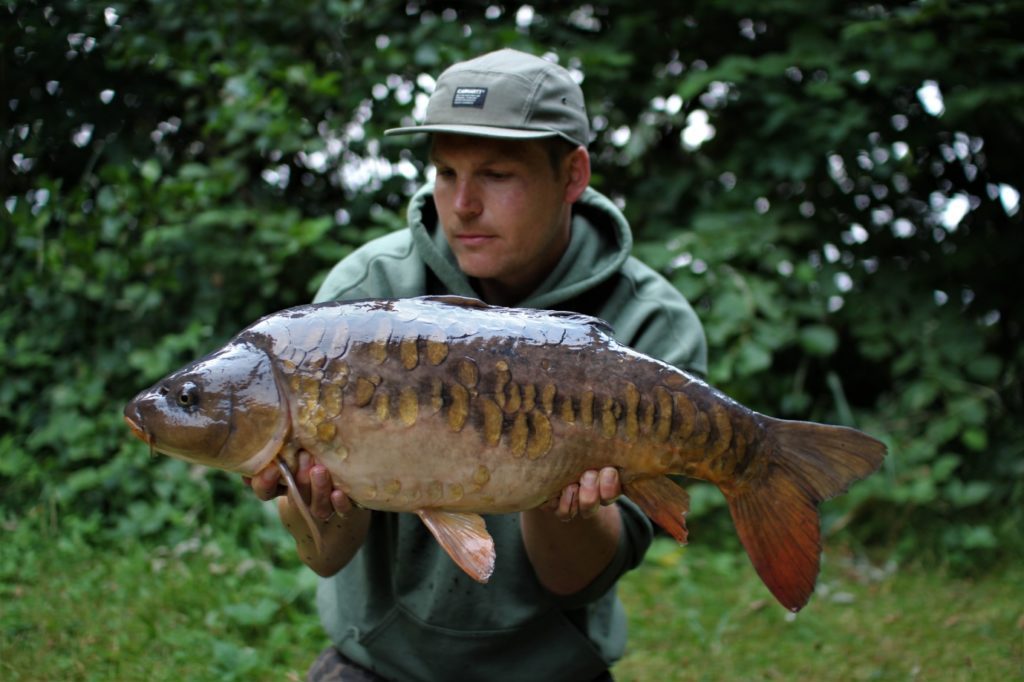 The first I had the pleasure to landed was the common. I had started fishing a swim that had an overhanging tree on the far bank; it was a comfortable 40-yard chuck and, interestingly, was also an area where I hadn’t seen anyone else doing anything. I could walk round and bait up by hand, getting the spread exactly how I wanted, which was a real positive in my book. 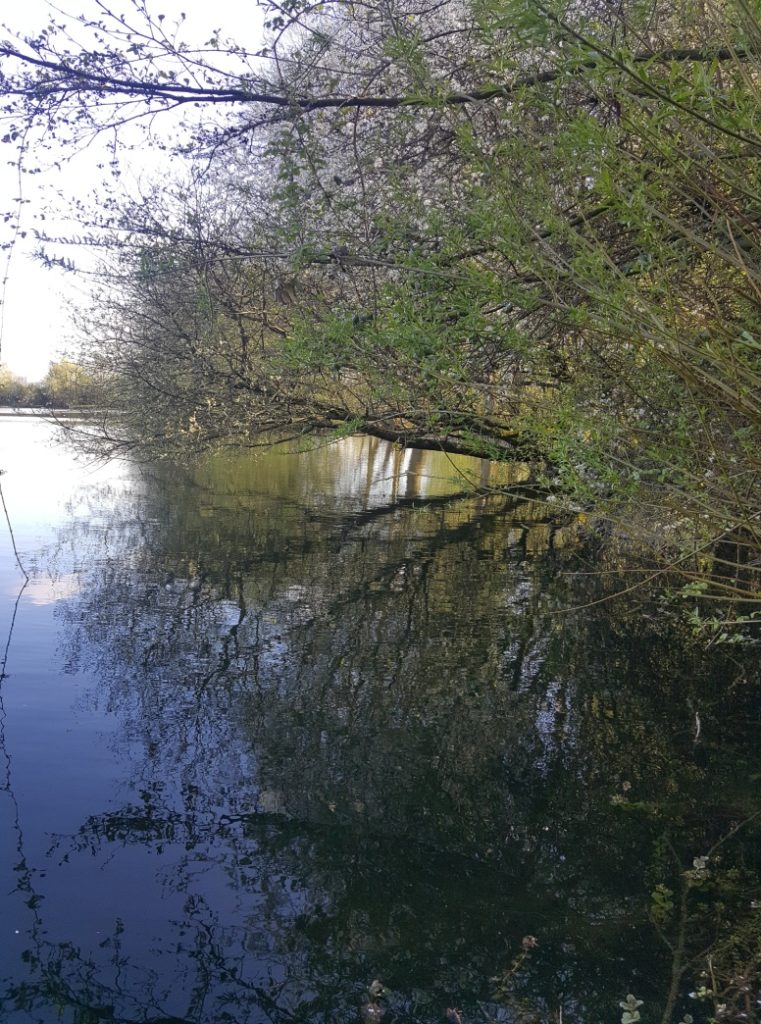 I remember it being a lovely May evening, I was sipping a beer and had rods leant on the bedchair whilst I rigged up – it all felt right. 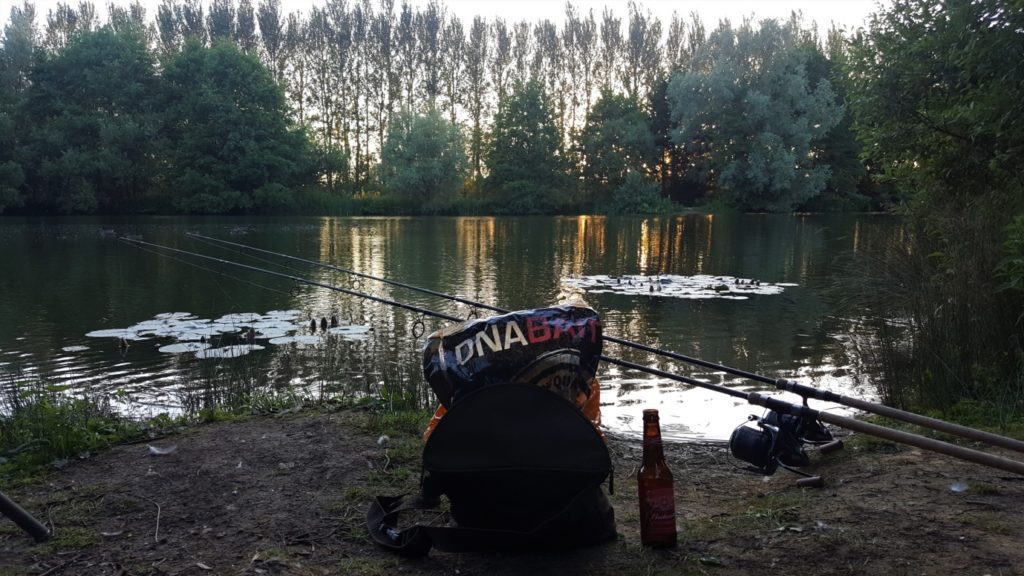 After blowing the froth off a couple more beers, I got into the bag and drifted off into a deep sleep. Next thing I knew I was jumping out of bed in the half light of morning doing battle with a carp that was a lot more awake than I was! This soon changed, as I had to get into the water to land the fish. Even though it was May, the water felt cold as it saturated my joggers. I had a feeling it was a better fish and, after peering into the mesh, I could tell I’d ticked one of my two most-wanted fish off the list. 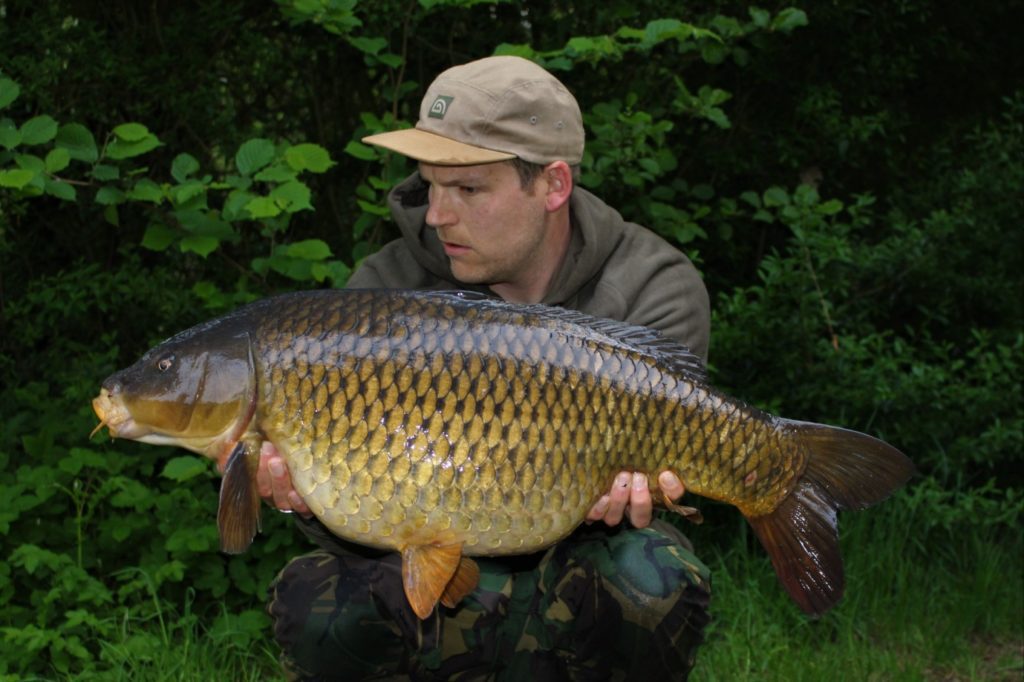 One of my two targets down

About a week or so later, I was on a work overnighter in a swim further down the lake. As the first rays of light hit my face, I opened one of my eyes and turned my head towards the lake at the same time the head of a large mirror slid out only a rod-length from the bank. Thinking I was still dreaming, I sat up, rubbed my eyes and focused on the spot, only to see a plume of bubbles begin to burst on the surface. I remember thinking to myself it was potentially a little clue from the carp gods. As the weeks rolled on, it wasn’t long before the fish were more interested in reproducing than any boilie. I left them to it and gave them a good rest before returning and resuming my goal of completing the set. 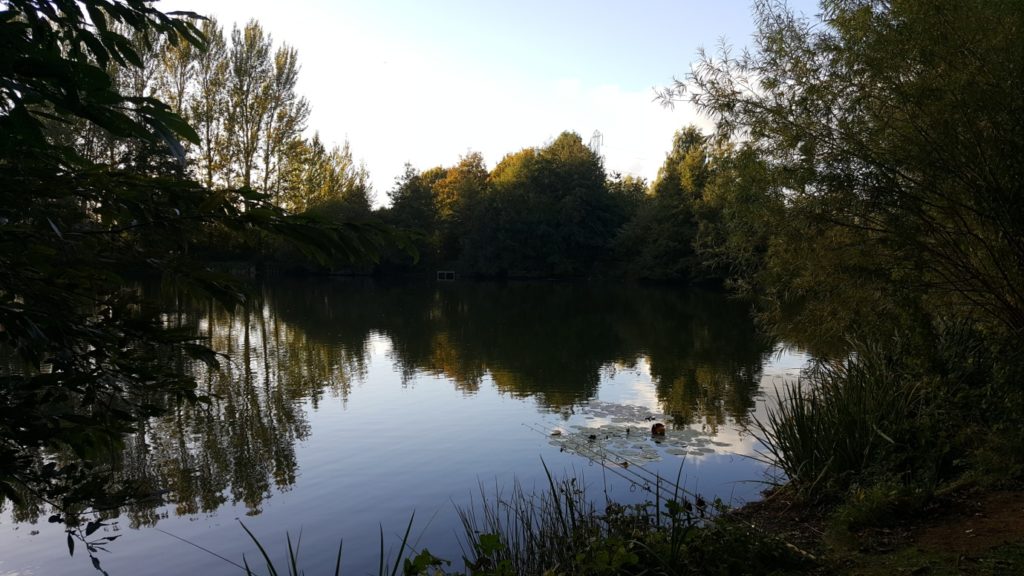 Where she gave the game away

It was a hot summer and it seemed to put the fish off getting their heads down. The influx of natural food didn’t help either. I managed to scratch out a few stalking opportunities after seeing a pattern emerge in a corner of the lake where the gravely margin steadily slopped off. Most mornings once I felt bite time was over, I would walk the bank and often see the carp ghosting along this area. Getting a rod on them didn’t produce any reward, as they soon sussed me. The next plan was to get the rod into position before they arrived. This did the trick and my trimmed-down S7 wafter was soon snaffled and another carp was quickly bundled into the net. My new tactic worked again on another occasion, but the crafty carp decided to avoid this area after that. 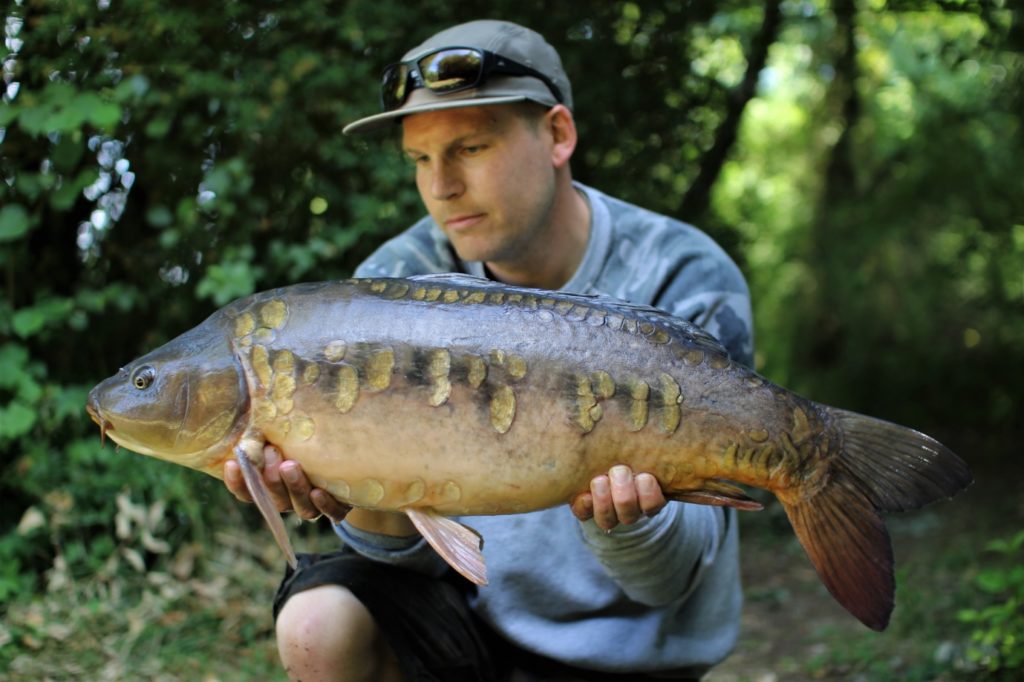 As autumn began to draw in, the cooler weather and depleting daylight hours seemed to get the carp back in the feeding mood. With the memory of the first-light sighting of what I believed to be the big mirror still firmly fixed on my mind, I thought that would be the perfect area of the lake to try and catch her. I continued to bait this area as I had earlier in the year, spreading handfuls of 15mm Secret 7 boilies along the bottom of the marginal slope. My next session coincided with some stormy weather that saw the air pressure drop and the wind hack into the area of the lake I was intending to fish. I had booked a day off work, so with 48 hours at my disposal, I was rubbing my hands.

The first night passed with only a tench to show for my efforts. This had come to my only rod fishing a bottom bait, which made me think with the ferocity of the wind and the undertow it was creating, my pop-ups maybe weren’t the best presentation. I tied up three new bottom-bait rigs and attached a 15mm Secret 7 to each. I had been glugging these in the Liquid Food since the start, so they were pretty potent. Each rod was dispatched to its mark and I quickly got myself tucked behind the brolly and out of the relentless wind. I hardly slept that night, with bits of twig banging into the brolly and branches creaking all around; it was one of those nights that seemed to go on forever. As the light levels slowly started to improve, the bobbin on my left-hand rod started to rise. Initially I thought it was just another bit of debris that had blown down the lake as I frequently had to clean the lines during the night, but as the reel started to tick, I knew my first inclination was wrong. I bent into the culprit and straight away felt a fair resistance. The fight was dogged, with the carp holding its own out in the deep water. I slowly gained line as it sung in the strong wind. It went in the net at the first time of asking. Initially I wasn’t sure what I had caught. It seemed to be a good fish, but the wind always seems to disorientate the feeling of the fight. I rolled the fish over in the net and could see its depth. I smiled and knew I had achieved the goal I had set myself. 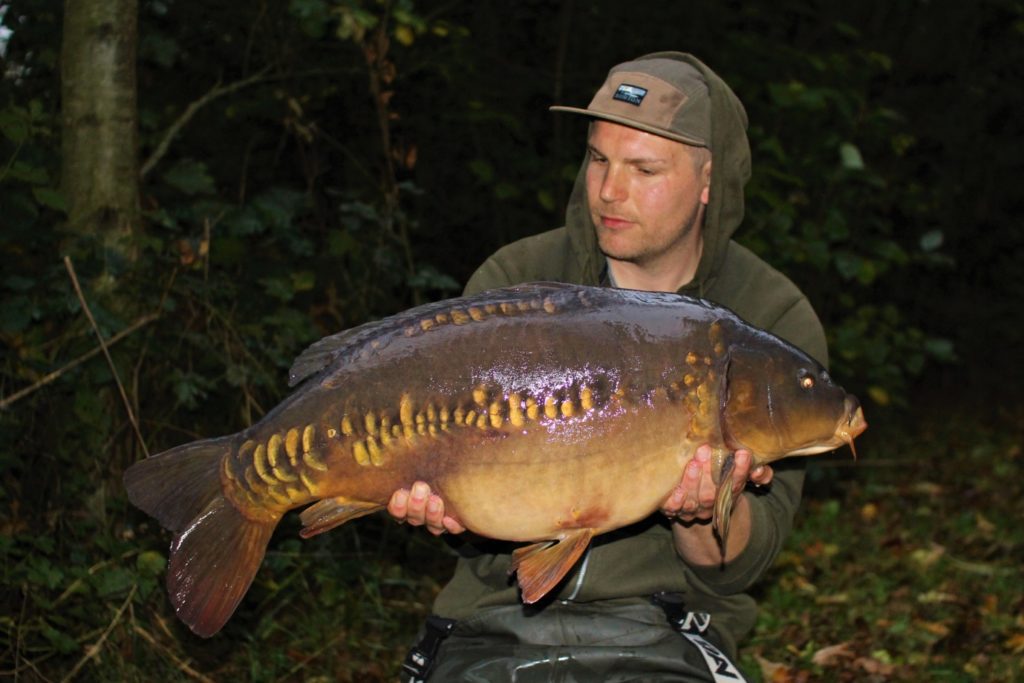 The one I wanted

I returned to the lake a few times in early March the following year and managed to catch myself a couple more from the swim with the overhanging tree. My ticket was due to run out at end of the month and, even though I had enjoyed fishing the lake immensely, I felt my time had come to an end and I should say goodbye, letting somebody else enjoy the tranquillity and make their own memories.