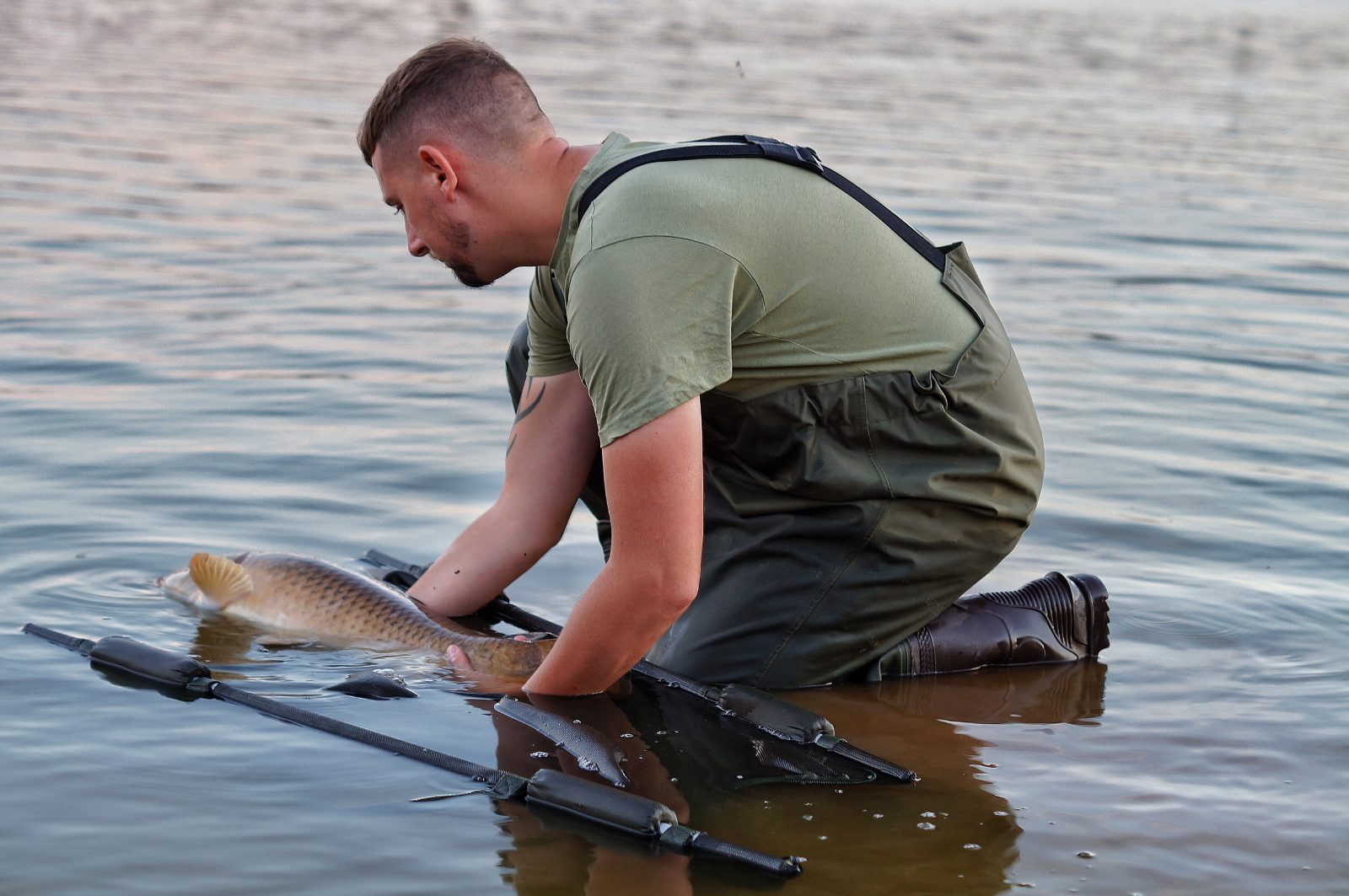 An evening on the Res 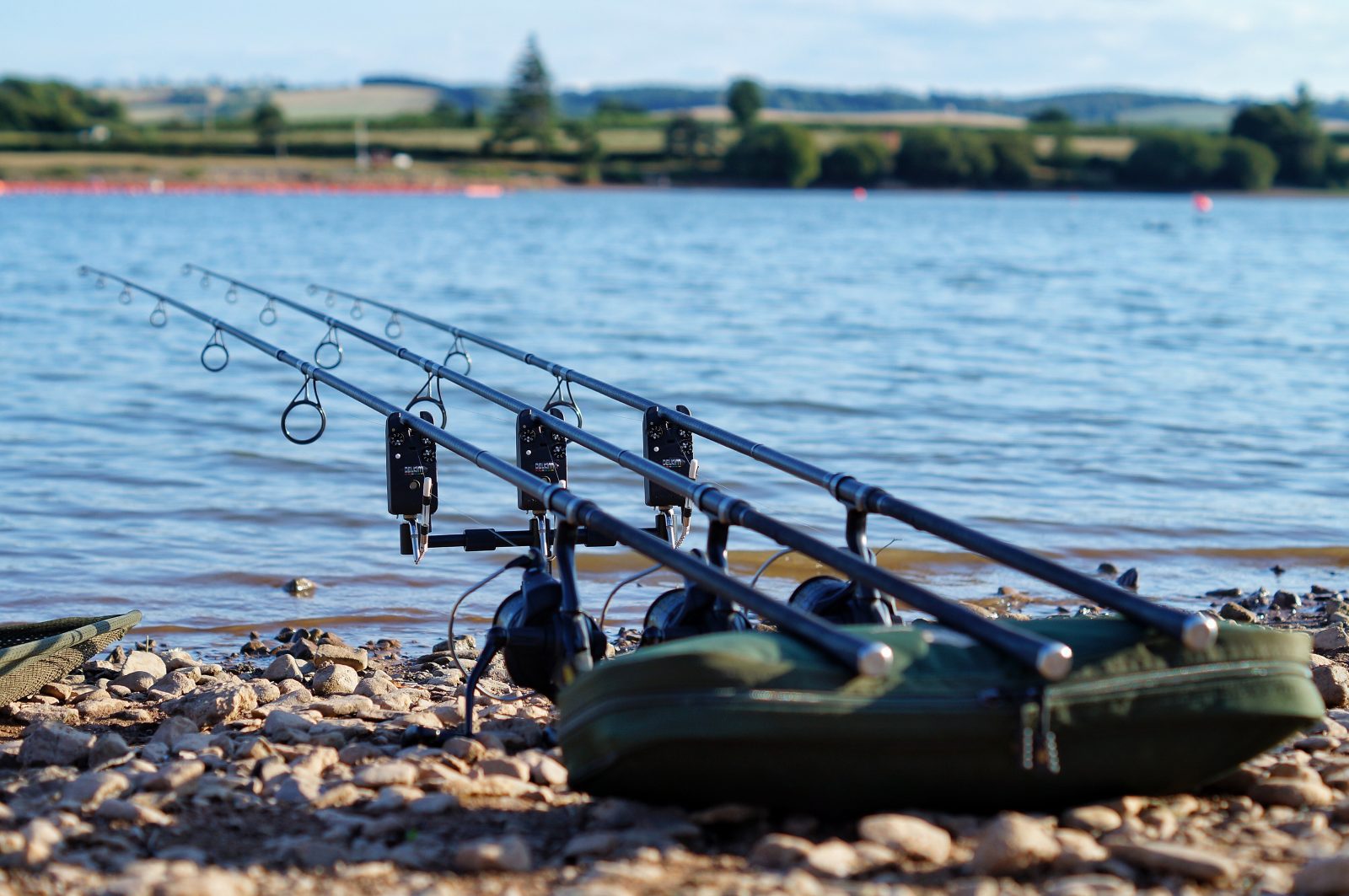 Rods out on the res

After finishing a long day at work, I decided to grab my gear and head down to a local 80-acre reservoir. I hadn’t fished here for a couple months due to committing my time to other waters, but heard it had started to produce the odd fish, so thought it would be a good opportunity to get down there – and what a session it turned out to be!

Pulling up in the car park, I was met by the sight of numerous vehicles. I knew it was going to be busy, so decided to take a walk round before grabbing my gear. I was surprised to see most of the anglers grouped up on one side of the bank. I decided to walk around the other side of the res and saw multiple shows in the deeper water against the dam wall, so quickly grabbed my gear and proceeded to set up.

The fish were showing between 60 and 100 yards, so I wrapped my rods at 80 yards and decided to spread them out, two baited with 15mm S7 bottom baits tipped with 12mm PB pop-ups on German rigs, and other on an 18mm S7 wafter, also on a German rig, and then baited with a bed of chopped and whole Switch and S7 boilies.

After waiting around half an hour, I had my first bite from the baited area. The take was very shy, with just a single bleep on the alarm and then nothing for a couple of seconds, before the bobbin dropped back slowly. I picked the rod up and wound in the slack before connecting with the fish, and after a brief battle, a mid-double common slipped over the lip of the net. 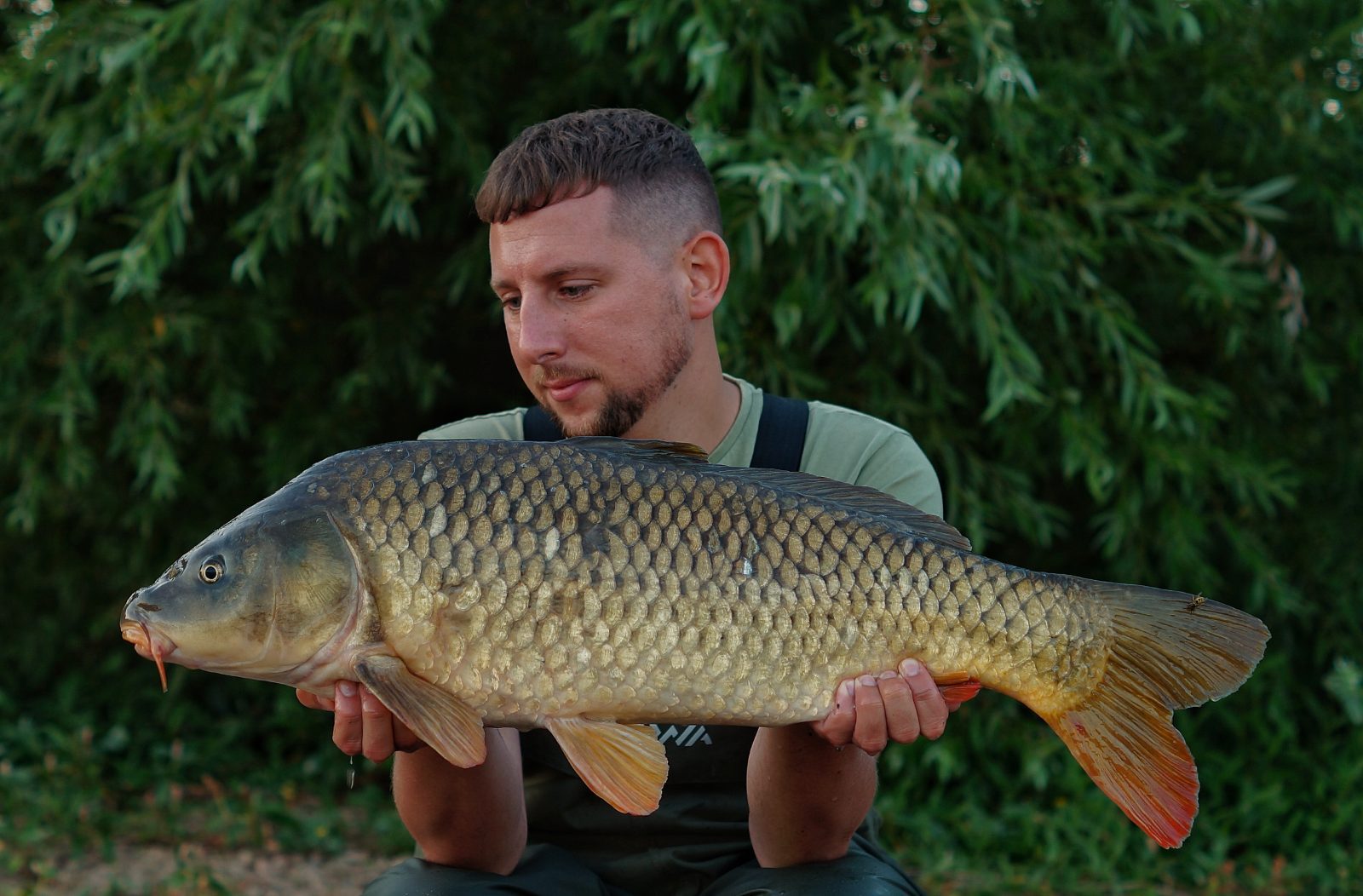 A mid-double common got things under way

At this point I wanted to get the rod back out on the spot as quickly as possible, so I re-wrapped 20 wraps, put on a fresh bait and got the rod back out whilst the fish was sitting comfortably in the net. I then proceeded to transfer the fish into the retainer sling, but as I was taking the fish to the mat for some pictures, the same rod took off again! I left a friend to deal with the retained carp whilst I played this second fish, which immediately felt much better than the first, but just as I netting it, the middle rod screamed into life! By this point I had a mid-double common in the sling, what looked to be a 20lb-plus common in net and was playing another fish! Due to the sheer size of the reservoir, I was surprised to get three fish in such quick succession, but it is not unusual for the fish to come on the feed late evening due to the no night-fishing rules. 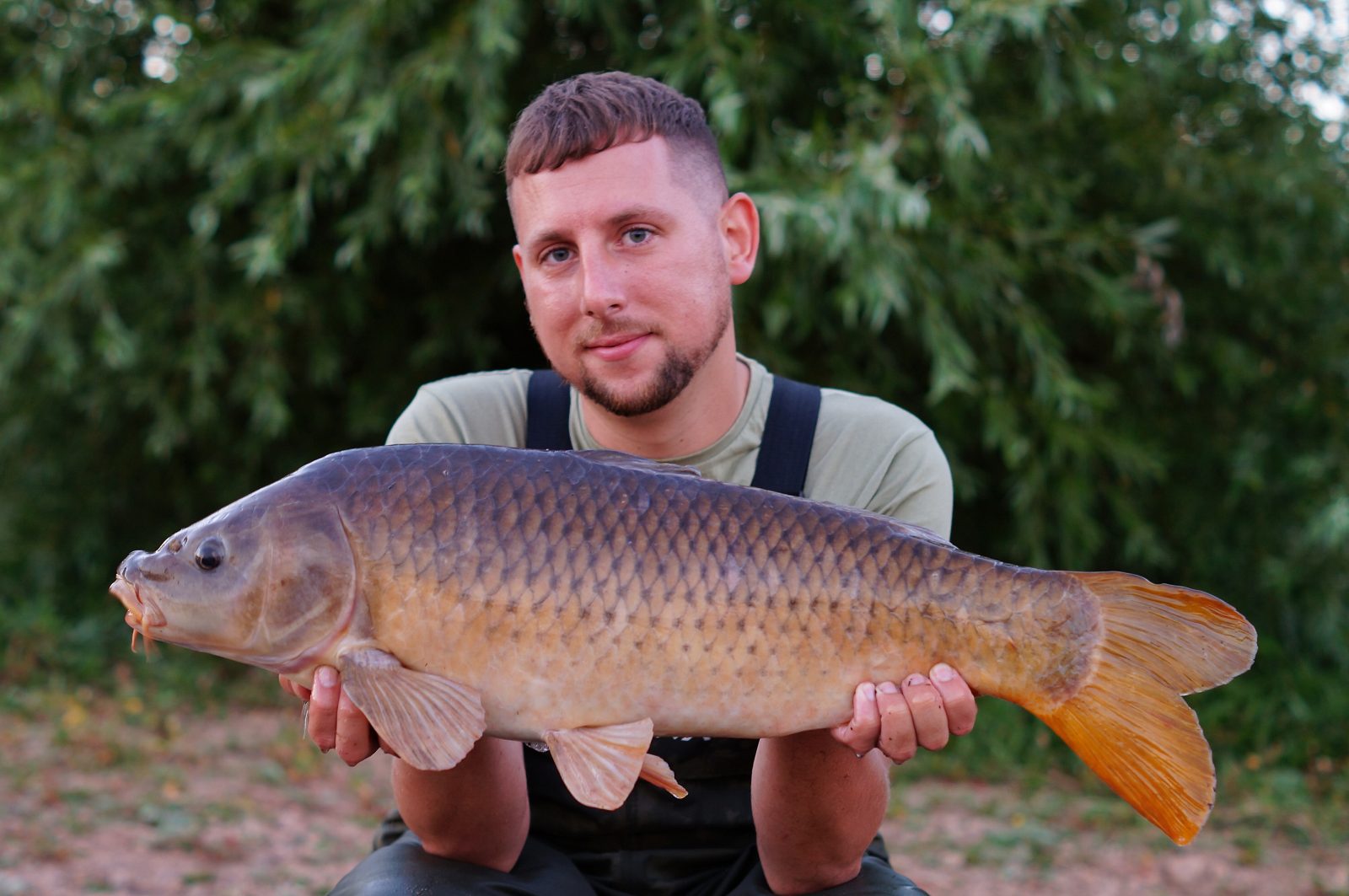 It was a hectic spell of action

After playing the fish for what felt like a good 20 minutes, I finally landed my third and final common of the session. It was coming up to closing time at the reservoir, so I decided to reel in my last rod so I could take the photos and return the fish safely, which was just enough time to pack down and leave uninterrupted.

It really was an evening to remember! 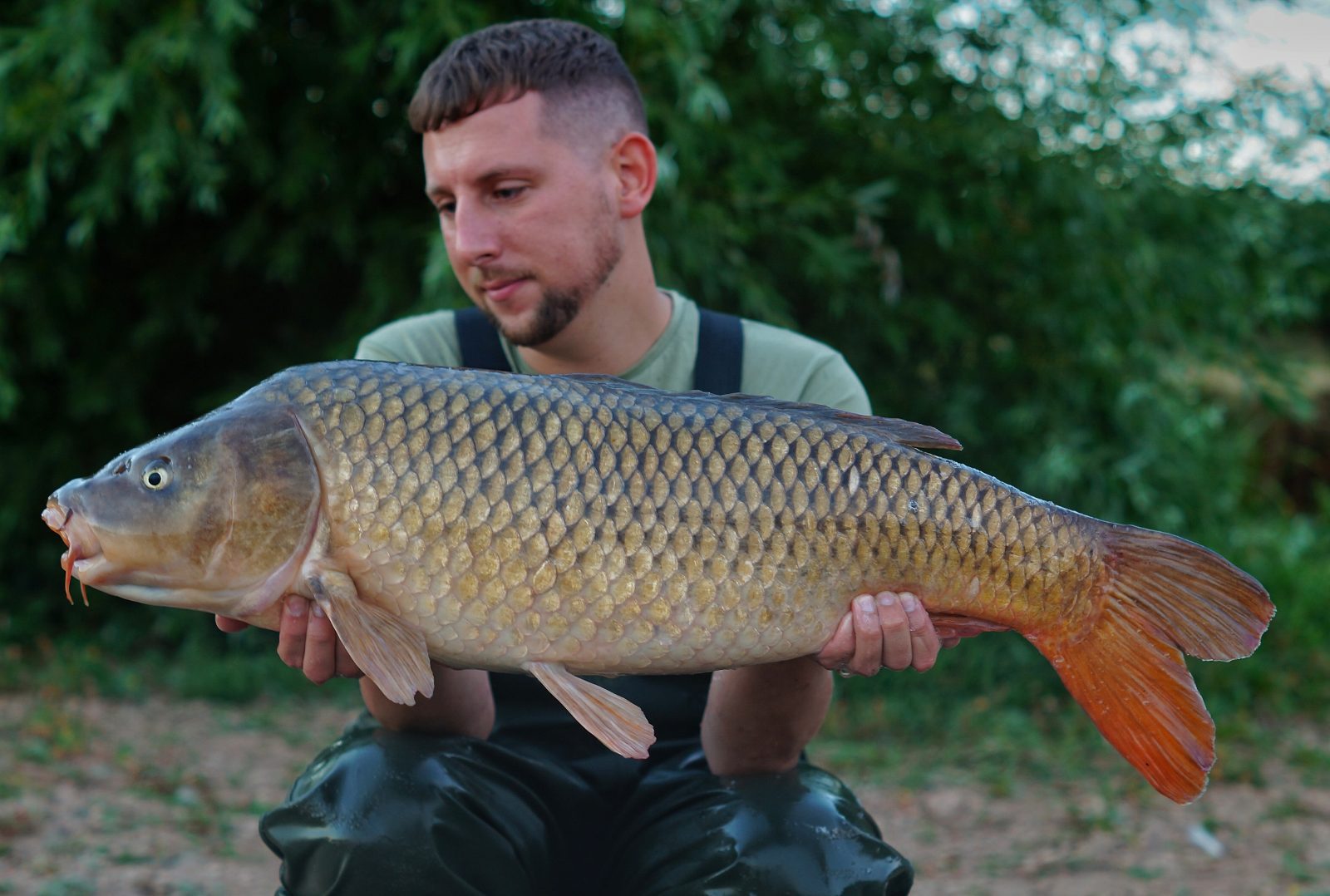 The biggest of three commons at 20lb-plus