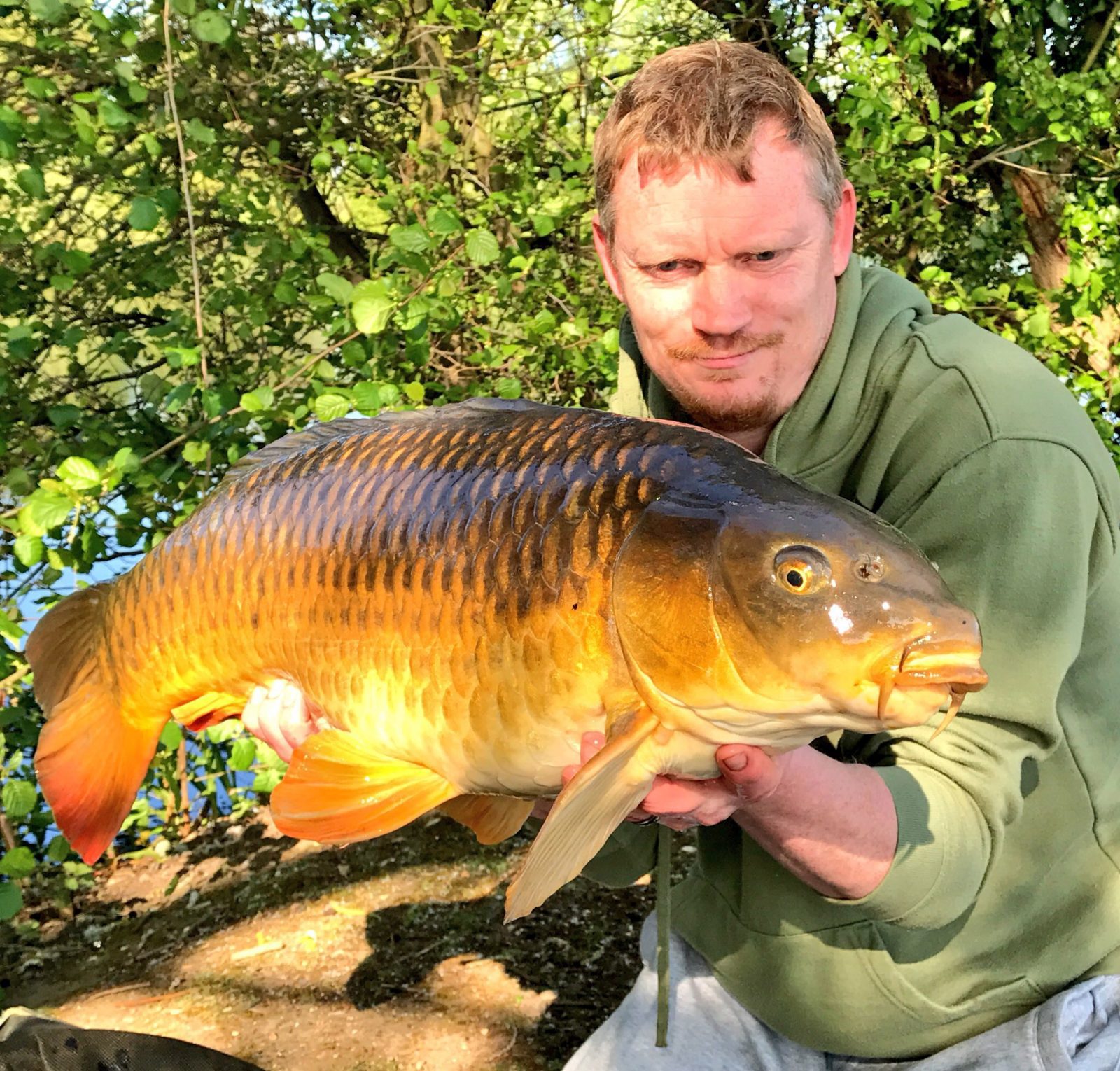 A recent convert to DNA, Alan Curtis explains how he hit the ground running with the company’s showcase bait, S7.

So, there I was on a cold, blustery building site with a busy day ahead of me and I was making the most important decision of the day: what bait to use. I looked into the usual bait companies, but nothing stood out. Then I remembered my mate Perry Alabaster posting on Facebook about the fish he caught, so I messaged Perry and we spoke a bit about the bait he used. Perry told about the success he had enjoyed on NuttaS and S7 and convinced me to contact DNA, which I duly did.

A few days passed before the postman delivered the goods I had been waiting for. I knew this because the wife rang me asking: “What the bloody hell have you bought now?” After finally getting home and through the door, ignoring the wife and the dogs, all six of them, I went straight to open the Jiffy bag containing small samples of each boilie flavour in the DNA range. I had a good smell and taste of the baits, before out came the wife’s tumbler drinking glasses, which were filled with water and baits placed in each one. Then it was off to the garden pond to see if my fish preferred any boilie over another, but they all got devoured in seconds! I then turned to our newest dog, Dexter, for the all-important taste test. I broke up the boilies and gave him a bit of each – he ate them all!

I managed to keep the bait in the glasses for 48 hours and was amazed at the leakage from the bait. With that I immediately ordered 10kg of NuttaS and 10kg of S7, with matching liquids and wafters, in readiness for my next trip, a birthday session on the Nash Lakes Royston complex.

As the session approached, I began preparing my bait. My plan was to get maximum attraction in the water with the least amount of food items; I wanted to catch them, not feed them. I decided to crush up some NuttaS and S7 boilies and coated them in their matching Bait Soak, then froze the bait in readiness for the trip.

On the morning of the trip, I was up bright and early. I loaded the van with every bit of tackle I thought I may need, forgetting the advice of the pros. It is a one-hour trip to Royston from my home and it was only 6am, but for some reason it felt like every bit of traffic on the road was slowing me down. If a lorry could pull out in front of me, it did! I met ‘Driving Miss Daisy’ about a dozen times, but eventually arrived at the gate at Nash Lakes after what seemed to be an absolute age.

I then got out the van to open the gates to find it had a coded padlock. I thought the combination would be on my booking confirmation email, but got a shock when my iPhone started to go crazy and I lost all my emails from the past month. I tried retrieving my mail and got nothing, so did something very technical and turned the phone off and on again. My phone then started redownloading 365 emails, until eventually I retrieved the email with the gate code. I drove down to the end of the second lake where the concrete parking area was and waited for my mate Mike to turn up, which he did around 8.15am, meaning we had 45 minutes to have look around before fishing.

We had a good look around both lakes, but there were no signs of fish, so we decided to plump for Wood Lake. I set up in a swim called Big Bay and Mike went in the Plateau. I had a little marker around and found the lake to be deep and flat; the only feature was the marginal shelf. I decided to put one rod on my margin and another on the far margin. To my right was a tree-lined margin that looked like the right place to drop a bait using my baiting pole. I opted for NuttaS on the first two spots and an S7 wafter amongst some Hydro Spod Syrup-coated crushed freebies over the tree-lined margin spot. It was then time for a cuppa and to put my home up for the next couple of nights.

A short while later I noticed a fish show on the opposite side of the lake; it couldn’t have been further away if it tried! I said to Mike about a move, only for a van to turn up and two guys set up on the fish. Oh well; the only thing for it was to put the kettle on!

The rest of the trip was quiet, until the final morning, when the right-hand margin rod that I put out with the pole burst into life. Well, when I say that, I mean the tip started knocking and the line went slack. After a few minutes, I bagged myself a lovely mid-double mirror, which I was buzzing with, as it was my first time on the venue and my first time using DNA products.

Soon after getting home I was immediately thinking about my next trip, which would be a two-dayer on Woolpack Fishery. Following my success on S7 at Royston, I decided to go with S7 all the way, crumbing up a load of boilies and coating them in Hydro Spod Syrup in the run-up to the session.

My S7 freebies always get a coating of Hydro Spod Syrup

I wanted to get to the venue at first light, so set off at about 4am. Parking up the van, I went for a walk around the lake. I couldn’t really see a lot, so just listened for sounds of fish breaking the surface. After a full lap of the lake and having not heard anything, I noticed there was only one other angler on the lake. I decided to have a sit down at the top end of the lake, where I had a view of the whole lake, and waited for sunrise while still listening for carp.

Once daylight had broken, all I could see were ducks and grebes; there were no signs of carp. I got up and had a walk round the lake with eyes transfixed on the water. After another 2-3 circuits of the lake, I found myself up the top end again, when out of the corner of my eye I saw a circle appear on the surface of the water. With eyes fixed on that spot, I waited for a bird to appear, but it didn’t. Then a fish poked its heads out of the water before gliding back down with minimal disturbance. I immediately found a swim where I could access the area, but in all the excitement realised I didn’t have anything to mark the swim, so I dashed back to the van, loaded up the barrow and headed back for the swim as quickly as I could. I got halfway down the track and it was time for a stop, as I was sweating, and then the barrow decided to topple over! After finally getting it up the right way again, I made my way to the swim.

Once in the swim, I decided to have a marker about and within an hour had three spots I was happy with. Three casts later and all my rigs were on the money. I then introduced 12 Spombs of bait over each spot and put the kettle on, before sorting out my bombsite of a swim.

It was about 2.30 in the morning when I was awoken by the sound of my Delkim going into meltdown! I scrambled out of my bag like a deranged slug and bent into my first Woolpack carp. A few minutes later my prize slipped into the net, a lovely 23lb 4oz mirror.

A beautiful 23lb 4oz common from the Woolpack

I then rebaited with a fresh S7 barrel wafter and got the rig back on the spot. Then at around 6.30am that weird screeching sound was off again! I leapt into action and was soon the proud captor of a 22lb 14oz common, this one taken on an S7 pop-up.

It wasn’t until the final night before my next bite, which turned out to be a 19lb 4oz mirror. I was over the moon with this session: a new bait, a new water and three fish under my belt.

A 19lb 4oz mirror, caught from the Woolpack

It was about this time my friend Steve Rogers contacted me saying he had just taken up fishing again, so we started talking about rigs, etc. We then got on to bait and I told Steve about DNA and the S7 I had been using. He was soon placing his first order ready for a session on Soham Bypass Lake, which we planned to fish on the May Bank Holiday Monday.

Prior to our session, Steve and I met up for a coffee and a chat, eventually arriving at the lake around lunchtime. There was only one other guy on and he hadn’t caught; he also told us nothing had been out over the weekend. With that in mind, we went for a walk round the lake to look for signs of fish or any potential features that may hold fish. As we were walking round we saw a fish roll out by the island, which was more than enough for us!

Steve set up in the swim by the corner of the island and I had the swim in the middle of the island. We had a marker about, found some spots and then got some rigs on them. I went in with one S7 wafter and two S7 pop-ups on helicopter set-ups, over which I introduced 12 Spombs of boilies.

My S7-coated boilies ready to be deployed

I didn’t have long to wait, as I soon had my first fish, a mid-double mirror, which was a very nice start to the overnighter. I then heard the sound of Steve’s alarm going off, so I went to fulfil my gillie duties and slipped the net under a 21lb common, a new PB for Steve and his first fish on S7. Steve then added an 18lb 8oz common, while I managed a common of 23lb 8oz. I couldn’t believe the results I was getting on this bait; it seemed like I had found a winning formula and was looking forward to the rest of the season.

However, as it turned out, that was the end of my season, as my wife became very ill for the next few months and I didn’t get the opportunity to wet a line again. I was more than happy with what I’d caught in such a short space of time, though, and with the wife getting back to full fitness, I’m looking forward to seeing what this year has got in store.