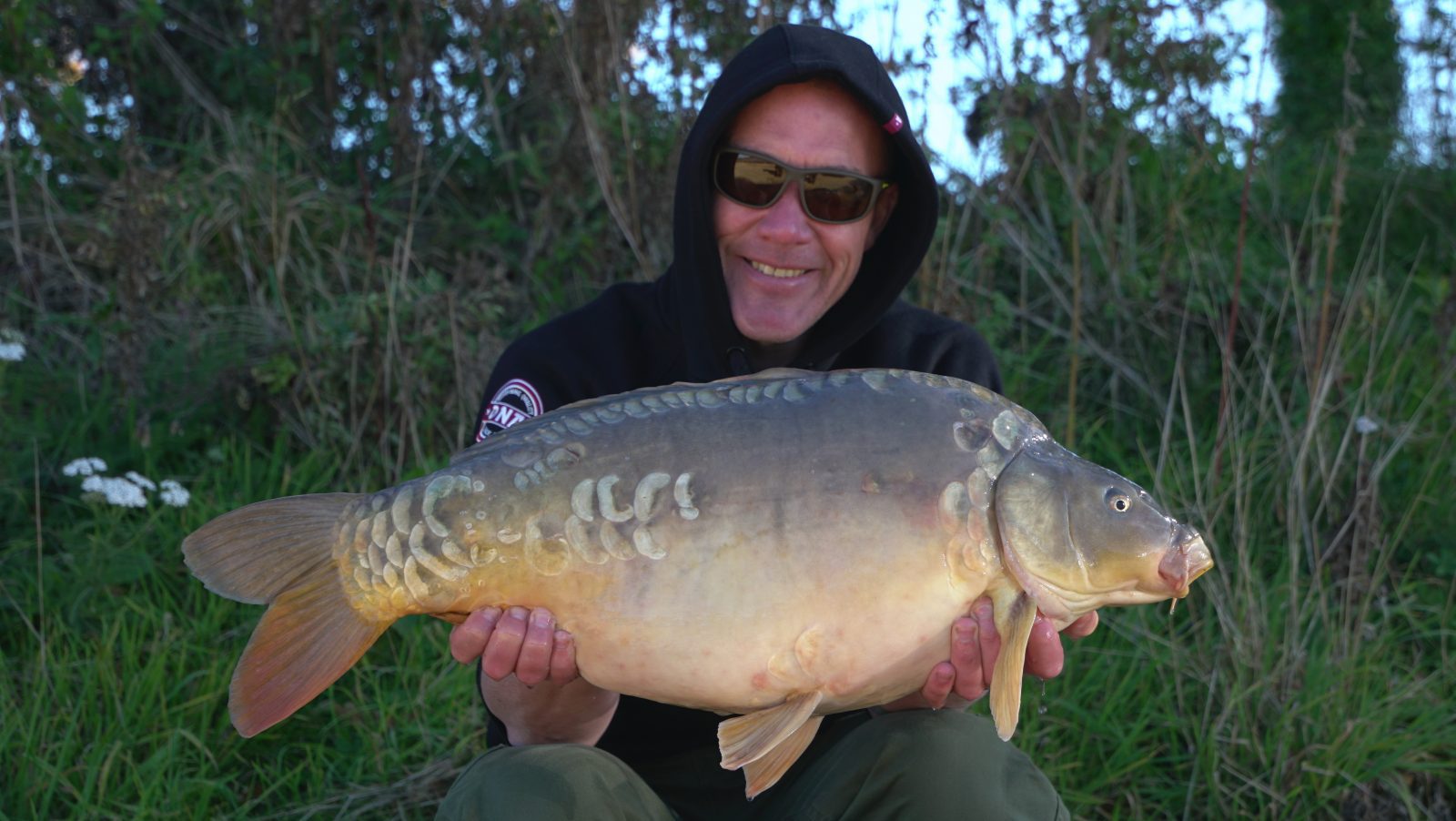 Jimmy’s Lake was a four-hour drive for me, and en route I couldn’t help but feel very relaxed about this shoot. I mean, these fish had barely seen any angling pressure at all, so I was kind of thinking how many we would catch, not if!

We arrived to find a couple of anglers fishing, so we made our way around to see them, but after a good chat with both, it wasn’t as we thought: they’d only had two fish in 48 hours, despite trying a multitude of different tactics. I went from very confident to very concerned in a very short space of time. Chris and Sam were obviously consistent anglers; in fact, Chris had test-fished the lake a couple of times previously and caught, but just the odd couple, not the numbers you’d expect from a lake with loads of fish in, and ones that had never seen a hook before. 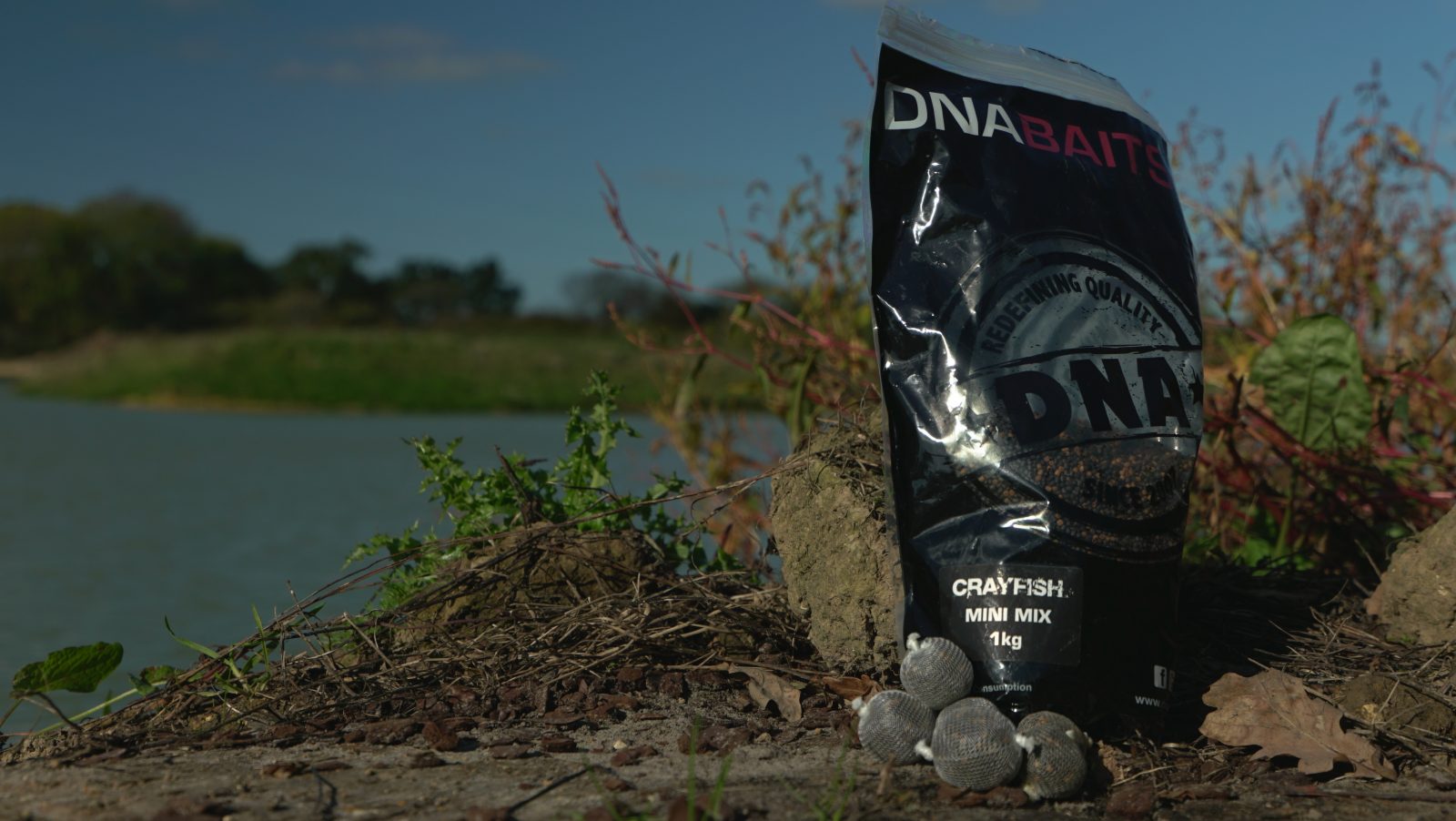 I left Chris and Sam to their fishing while we set up on a few bubblers at the far end of the lake. It looked textbook stuff really, but with only a couple of liners to show for my efforts, it was time to go and explore the lake. I found what I was looking for over in one of the corners: the fish were ripping the bottom up only 10 yards out. I literally legged it back to Mozza and we simply chucked the rods on top of the van and made our way to the northerly corner where we’d surely get a bite almost instantly. I underarm flicked a couple of rigs out with small mesh bags of Crayfish Mini Mix pellets on for attraction. I hedged my bets with a German rig on one baited with a new large Milky Malt wafter, and the second rod on a yellow PB pop-up on a QC rig, my go-to rigs, as you’ve probably realised from this year. There were fish crashing all over the place past my rigs and were colouring the water up very close in, but not so much without so much as a bleep on the alarms – absolute madness! 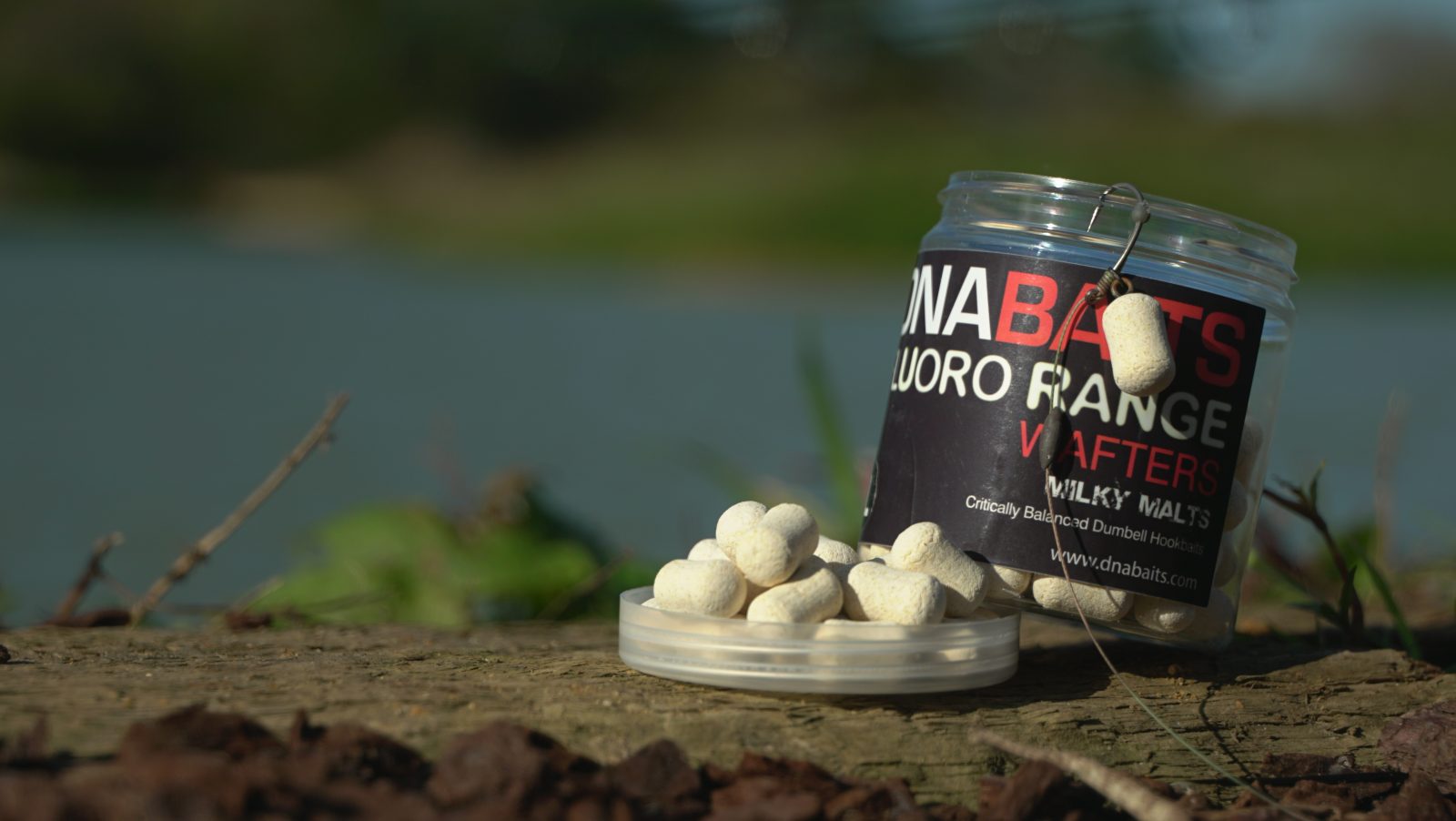 The time was now ticking on, as we were about to start losing the light, so I did have another slow walk around the lake to see if anywhere else looked a better option for our first night, but it didn’t, so we were on fish, and not just a couple! Chris was staying on another night and we didn’t really fancy competing with him, so we basically stayed put in the corner, with Mozza in the swim to my right. Now we had the dilemma of how to approach it. 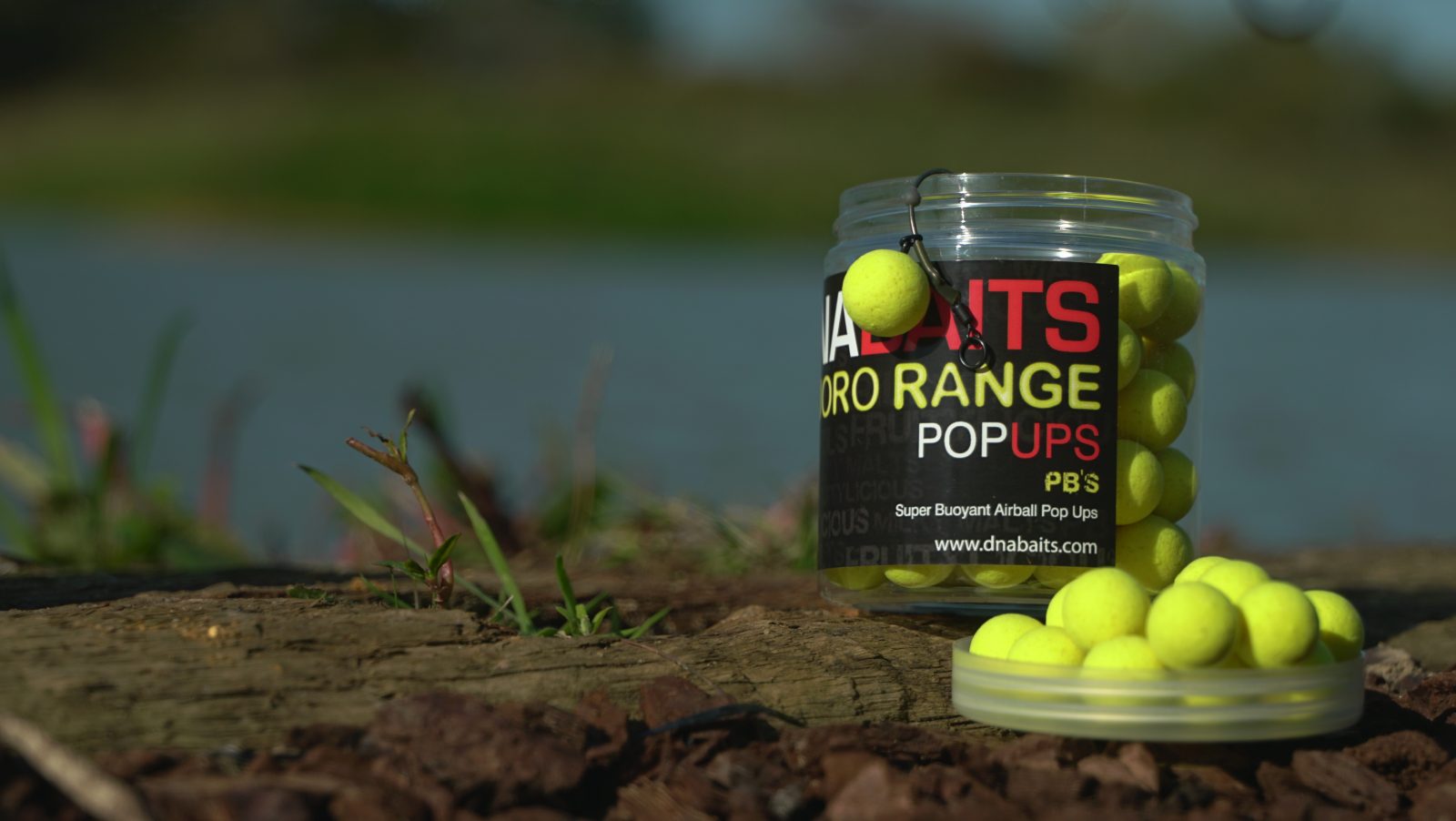 The lads we spoke to hadn’t really used any quantities of bait; they were just trying to nick a bite, so me being me, I went against the grain, as I was sure they hadn’t seen a big bed of boilies before. I found a raised rubble plateau out in front where there were a lot of shows around, so the fish obviously liked the feature. My plan was to walk around the bank to my left and scoop in around 6-8kg of mixed S7 and SLK in a line from the margin, over the plateau, and all the way to the island margin some 50 yards away. The thinking behind this was if anything came on any route from my right, or from behind the plateau, they’d come across a bed of highly nutritional goodness. Surely this couldn’t fail! My only slight issue was I was definitely going to spook some fish once the boilies started raining down on the lake from the scoop, as it’s not exactly the subtlest way of baiting up, but you do get a lot of bait in the pond very quickly, so it had to be done. 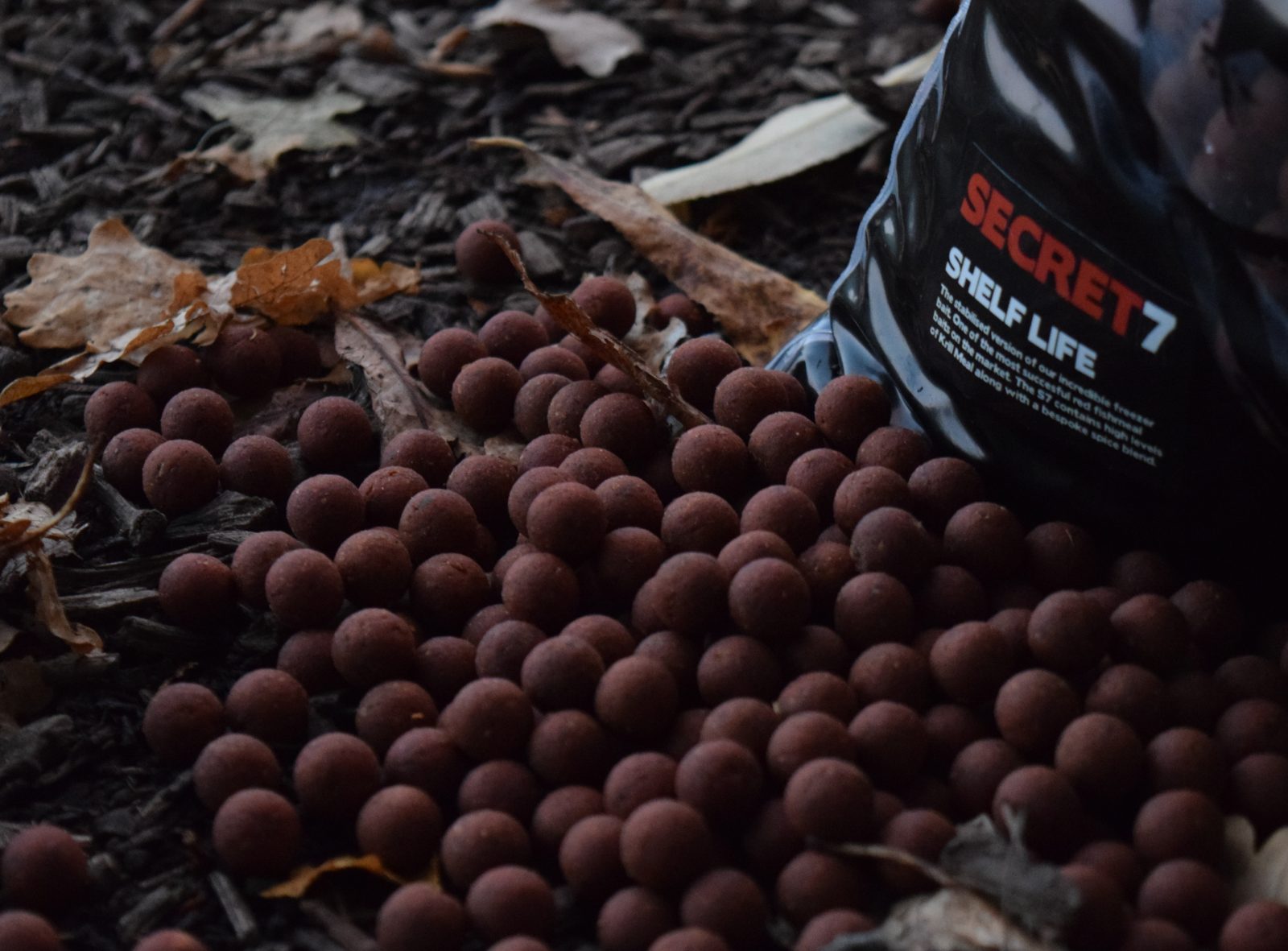 We baited up with a load of boilies, but we expect they were cleaned out in no time!

It was then a case of fishing one rig either side of the plateau, but not too close to it as the rubble was very savage in places, so I didn’t want to be running the risk of getting cut off should I hook a fish. I was very tempted to go with matching hookbaits due to what I’d just shovelled in, but I went with the same ‘cherry on the cake’ approach to maybe get a quicker bite from sight feeders, so the rigs and baits remained the same as when I was fishing under my tips earlier in the day.

I was feeling very confident if I’m being honest, as I started to get liners only an hour after filling it in, so as I retired for the night, I was sure I’d be woken very soon by a fish picking one of the two rigs up. I reckon it was 10.30pm when I was answering a call of nature that I realised I hadn’t had a linear for about an hour, and for the rest of the night I didn’t receive a single bleep – had they cleaned me out in no time at all? Surely if they’d turned up on that feast I’d have got a bite! After all, a large percentage of these carp had never seen the bank, let alone knew how to deal with rigs. Mozza actually chucked a couple of rods out on this shoot, something he never does. Now, he’d had liners all night long and was still getting them at first light, but again, there were no bites for him. We were a bit concerned!

We both had a recast to freshen up the attraction, but still nothing. This went on until around lunchtime, when I spotted a few fish colouring up very close in in front of my swim. I quickly reeled both rods in and flicked them to the area. We were seriously considering calling the shoot off, as we always try to catch a couple of fish on the OAS and it wasn’t looking good at all, despite us both trying extremely hard to catch something. We said we’d give it another half hour and then decide, but just at that point my right-hand rod absolutely flew off and we were in contact with our first Jimmy’s Lake carp. It was one of those heavy, nervous fights, until finally it was mine. We were more relieved than excited, let me tell you!

The fish weighed 22lb 4oz and was absolutely pristine. Then not long after that Mozza had a bite from a mega mid-double linear, so what had made the difference? We were now all fired up, but way behind on the filming front, as we simply hadn’t had anything to film. We obviously decided to stay now we had landed a couple and all was buoyant again, but none of the two fish had come to bait, just mesh bags of the Crayfish Mini Mix pellets with bright high-attract hookbaits, so that was the way we’d go for the remainder of the session. 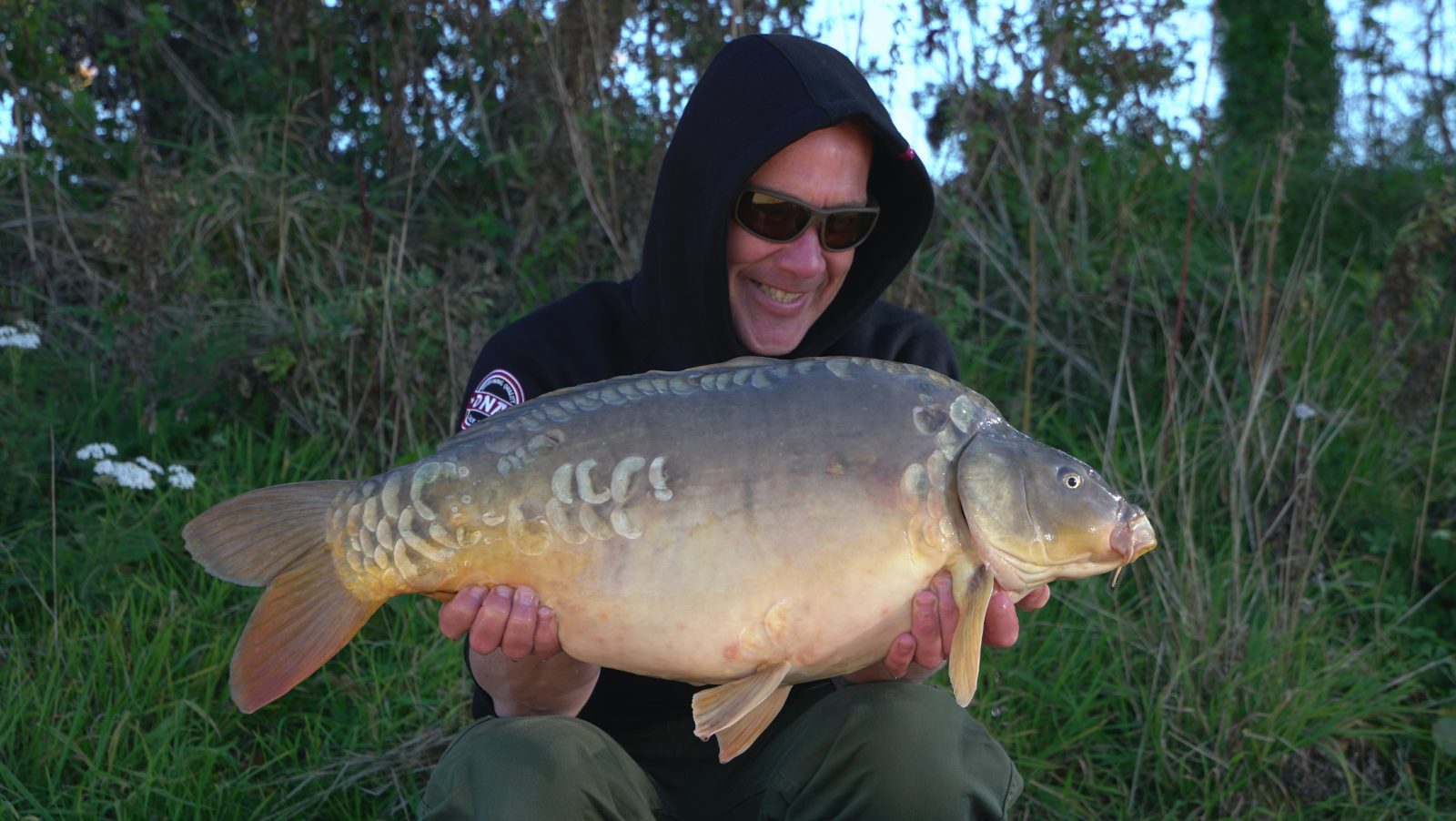 We cracked on with getting bang up to date on the filming side. I then saw a group of fish showing across from us, so we were on the move for the second night. It was getting late again and we had only just got stuff sorted before the light went, but again we were on fish and getting liners. The fish definitely drifted off me after dark; in fact, another bleep-less night followed for me, but Mozza was getting battered by liners; some were even pulling the line from the clip but nothing would materialise after that. He was very tired come first light and very confused, as was I.

Normally on the OAS shoots we are gone by mid-morning after our two nights, but now this was getting personal and we thought we needed another fish to make the show a touch meatier, but more than that, we both wanted to get another bite to give us some of our bloody sanity back. We decided to stay much longer than normal. Bearing in mind I had a four-hour drive home in front of me, I didn’t care, as I wanted another bite, as did Doris.

I’m not going to lie, we moved another five times during the last five hours. Each time we were on fish, but had nothing other than line bites, and in all honesty, our work rate during this trip was more than any other OAS, even the ones when we were chasing them about on floaters too. We had to draw a line on it come 4pm.

In fairness it was an honest shoot. I expected to thump them, lots of them, I took loads of bait with me so we wouldn’t run out like we did at Trent View, but we’d had the bites on small traps. It was like the fish didn’t know what the hell was going on, despite us seeing them crashing all over the place.

I do think it will be a different story once the fish have had some serious angler pressure. It’s almost like they need day-ticket training and only then will the big hits start to appear, because the lake is certainly well stocked with a lot of big carp and has huge potential.

Looking back, I’m glad we didn’t sack it off. We stuck it out and ground a couple of bites out, which again is reality, but Mozza took it much worse than I did; he looked a broken man, as he knows Simmo will be giving him loads of banter come this year’s harvest. I just took it in my stride and put it down to one of those things, like I always do. Carp are animals and at times we can throw everything bar the kitchen sink at them and nothing works, and this was one of those occasions.