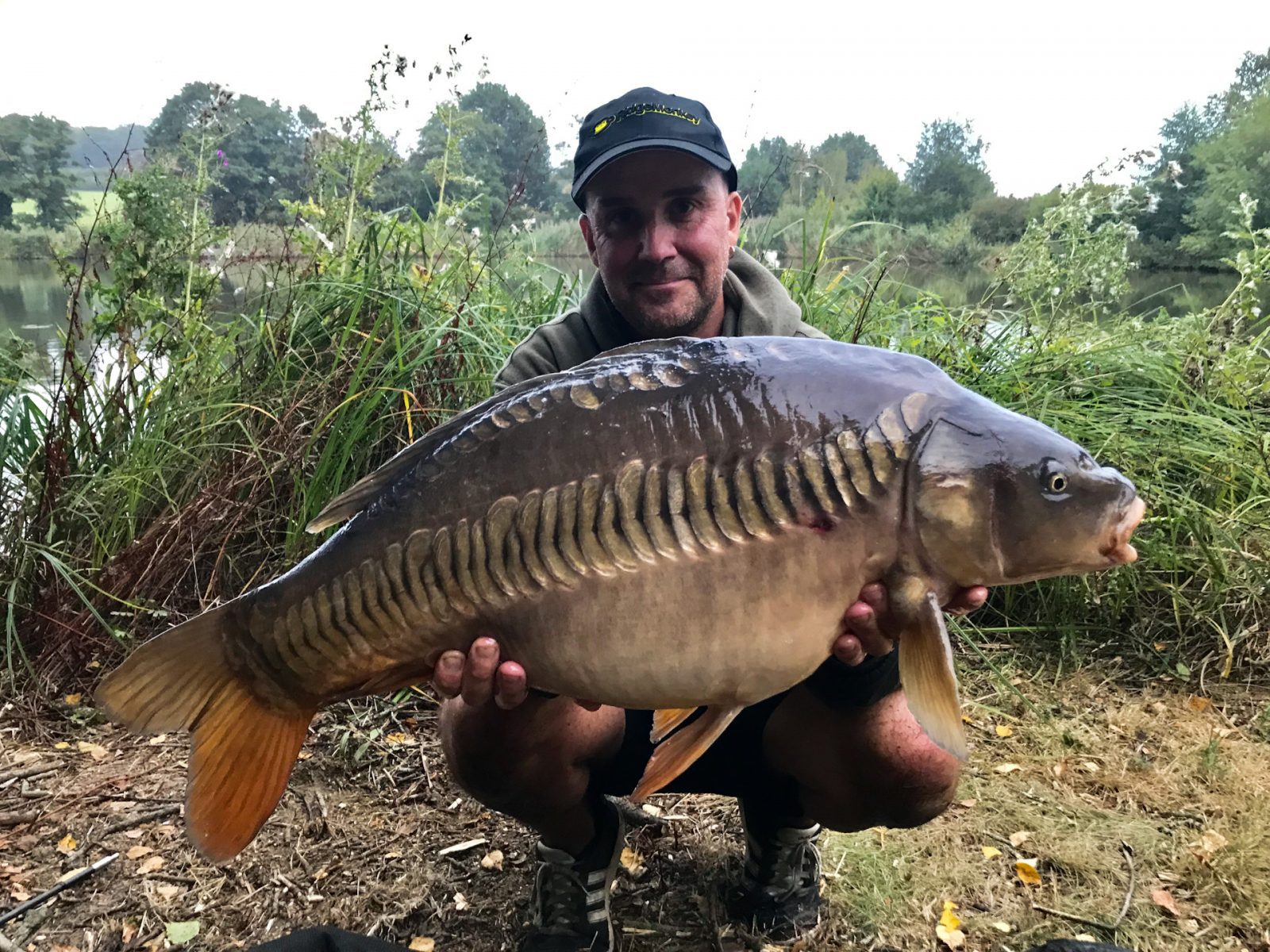 It’s hard to believe 17 months have already flown by since the last DNA team social on Elphicks’ North Lake, an action-packed session that saw plenty of carp landed, including two over the magical 40lb barrier. I was keen to get another exclusive lake booking after that trip and quickly got to work on filling spaces for our next group outing. With pretty much everyone from the 2018 Elphicks ‘Smash ’Em Up’ session, barring myself, unable to make it to this year’s social for many different reasons, I took on the responsibility of finding a group of anglers to join me once again on the awesome North Lake.

Last year’s spring session saw us catch on a wide variety of baits and tactics. The awesome range of liquids from DNA were put to good use on zig rigs and over maggots in April, but an early-autumn session would surely provide a very different challenge.

I made my annual New Year’s Day journey down to Kent and slept in the car park overnight once again to be sure I’d be able to secure a few September days for this year’s lake exclusive. A suitable date was booked and it was on again. All I had to do now was find eight willing anglers to join me.

Four of the places were snapped up by team DNA members, Steve Scotford, Steve Phipps, Dan Gay and long-time team member David Legard. David’s friend Mark Thomason, along with mate of mine who lives near Elphicks, Matthew Carr, and his son Billy, would also be tagging along and all using bait from the DNA stable, while a last-minute vacancy was taken up by a local fishing pal of mine, Mark Edgeley.

So, the eagerly awaited day had finally arrived and we all met at 7am sharp for a quick walk around the lake before doing a draw for swims. In my mind I really didn’t care where I came out in this draw. Even coming out last wouldn’t have been a disaster, as it would mean I’d get access to the most water, with the chance of slipping in somewhere with a vacant swim or two either side. Everyone took a numbered piece of paper from a hat and I picked up the last remaining piece of paper, then we all tentatively opened them up to reveal our fate. Number one for me: pressure on! I’d been telling myself for months I really wanted to give the shallows a try, as it always seems to throw up a chunk or two throughout the summer but the weather forecast just didn’t look favourable so I chose the swim I knew best, one that had produced three different forties for me in the past two years, all be it in winter. Better the devil you know, as they say.

Billy had second choice and opted for the swim opposite me. The two Marks and Dan came out next and all chose popular deep-end swims. David then occupied a swim between the islands, Steve took the final deep-end spot, Matt went opposite David in the middle, and Steve drew last choice, so he had the shallows all to himself.

We all took a soaking as we set up in the pouring rain, but the forecast was for mild, overcast weather and it couldn’t have looked better. On the last Elphicks social, a wide variety of tactics saw us bank 51 fish as a group, but back then in April, the silver fish were far less active, so maggots used in conjunction with the Hydro Spod Syrup liquids and Krill Powder came into play a lot and kept the fish grubbing around, whereas zigs soaked in Sticky Sweet also tripped up a few carp, but this time would be very different. The warmer water temperatures meant the silvers would mop up any maggots in seconds, so they weren’t even an option and the rapidly dropping air pressure meant a bite on the bottom looked far more likely than mid-water bites on zigs, and so that soon proved.

David was the first to get off the mark with a 24lb 8oz mirror, caught on a Milky Malt pop-up over a bed of Switch freebies. Mark T, fishing next to David, soon followed that with a 33lb mirror on a PB pop-up over Switch, which meant the Yorkshire lads were off to a flyer. Matthew took a 27lb common from between the islands on S7, fished over matching chops soaked in Hydro Wheat. It was evident at this point that quite a few fish were held up in the middle section of the lake. 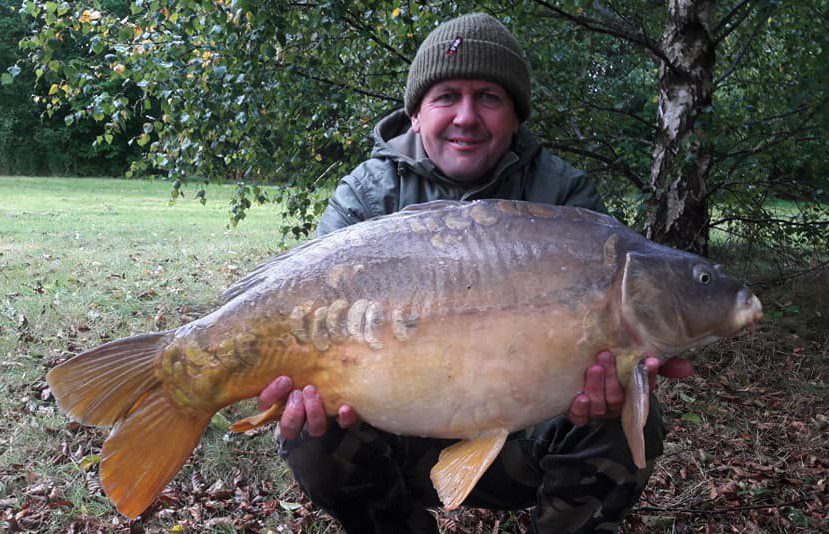 Dave with the first fish of the trip 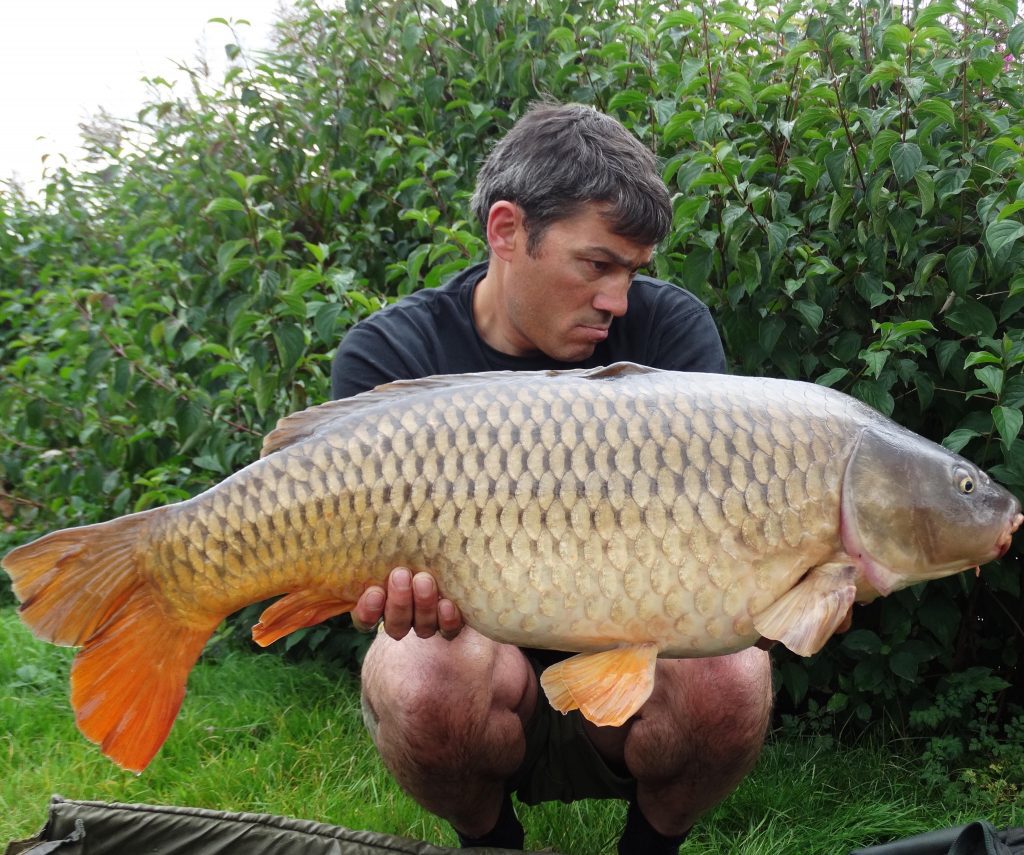 Matt Carr with a 27lb common

As the afternoon went on, the deeper end came to life. In-form youngster Billy, doing his first-ever North Lake trip since reaching the minimum required age of 17, banked a 30lb mirror from the roadside corner swim using tipped S7 hookbaits over matching freebies. Dan and Steve got in on the action with a common and mirror of 29lb and 19lb respectively. Mark E, fishing next to me, landed a nice brace of thirties as the first afternoon went on, which left me wondering if I’d made a big mistake choosing a swim that had good winter form but might not be any good for September! 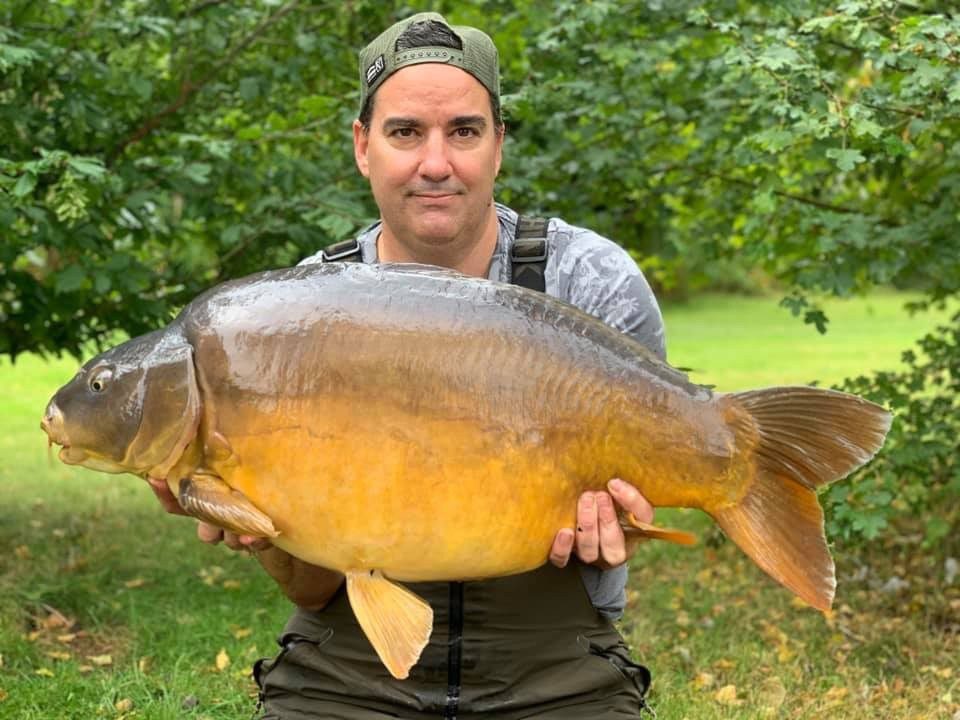 One of two thirties for Mark

Thankfully, my concerns didn’t last long, as a 23lb mirror fell to my S7 wafter from my favourite ‘winter’ spot. As the first day came to an end, the bites continued to come for the two Marks to my left, and Mark T’s approach of PB pop-ups over Switch was working particularly well, as he landed a 33lb mirror followed by a 28lb 12oz common. Steve S and Dan were catching steadily on the roadside using a mixture of S7 and NuttaS, with fish of 20lb, 21lb and 33lb fall to Steve S, whilst Dan had mirrors of 21lb, 22lb and the biggest fish of the trip so far, a common of 35lb 4oz. During the night, Billy bagged himself a 24lb common and a cracking 29lb half-linear mirror on his tipped S7 hookbaits over chops. It had been a good first day, with fish getting caught from various areas. 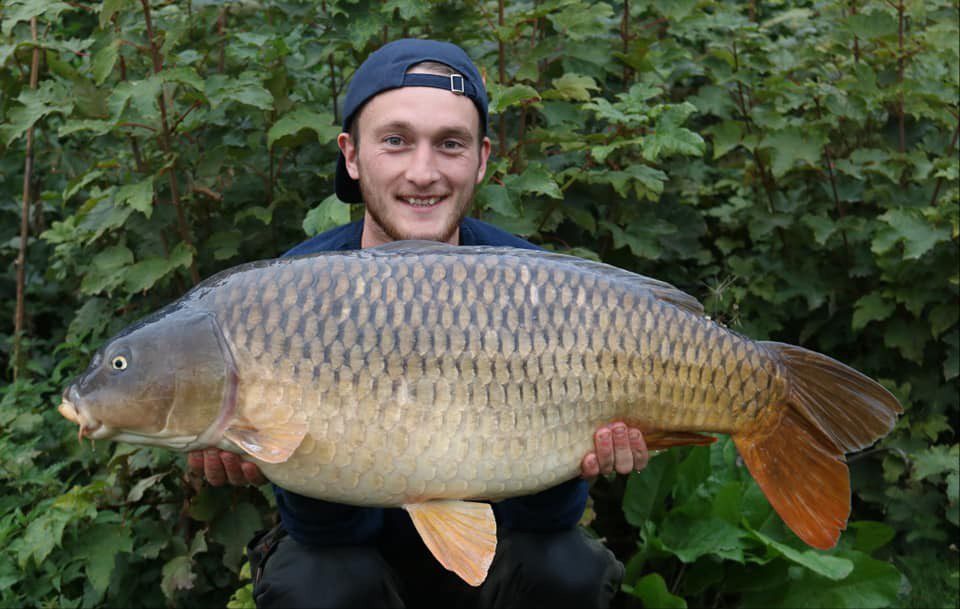 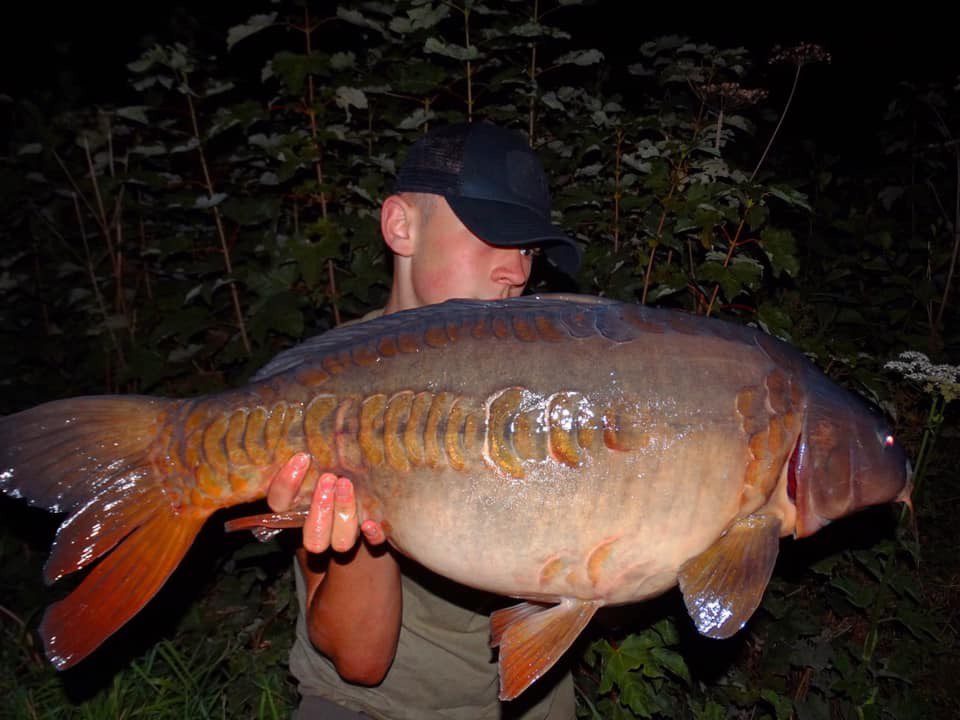 A lovely looking mirror for Billy

As the sun came up on day two, only Steve P had yet to get in on the action, but with the rising temperatures, it looked more promising for a bite from the shallow water. The fish came thick and fast for Mark E next to me, while Dan added a couple more twenties to 25lb. Steve S had a couple of doubles and a 27-pounder, as the S7 started to dominate in the deeper water. Then Mark T raised the biggest fish bar with a 36lb mirror on a PB pop-up. Steve P’s patience and persistence in the shallows finally paid off when he nailed a cracking well-deserved personal best mirror of exactly 42lb. What a way to save a blank! 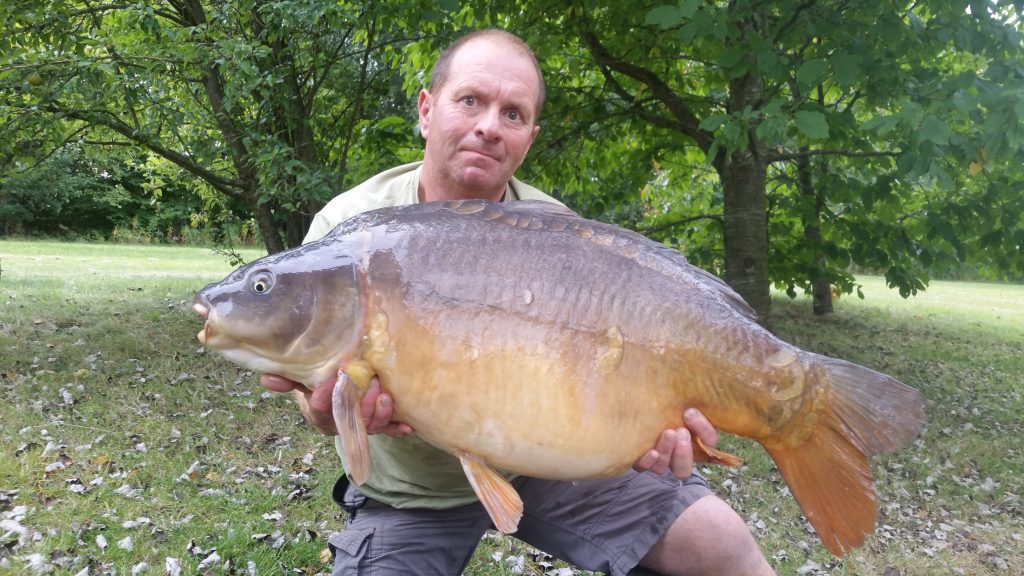 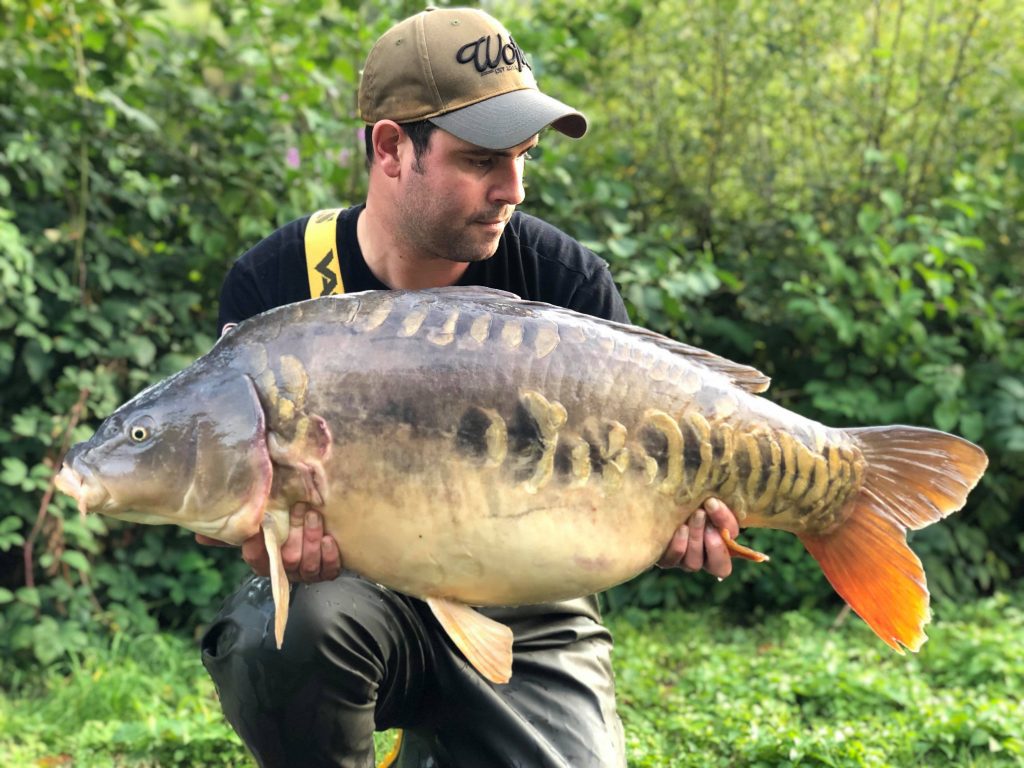 Steve’s persistence paid off with a new PB of 42lb

By 6pm the fish had moved into the deeper water in numbers and my swim came alive as they got their heads down on my baited area of hemp and S7 chops. I had a good run of six fish between 6pm and 1.30am on the S7 wafters, including three twenties to 29lb, two mirrors of 31lb 4oz and 35lb 14oz, as well as a common of 34lb 8oz. The second forty of the trip fell to Dan, as he caught a huge 47lb 8oz personal best mirror on an S7 wafter hookbait fished over washed-out freebies. 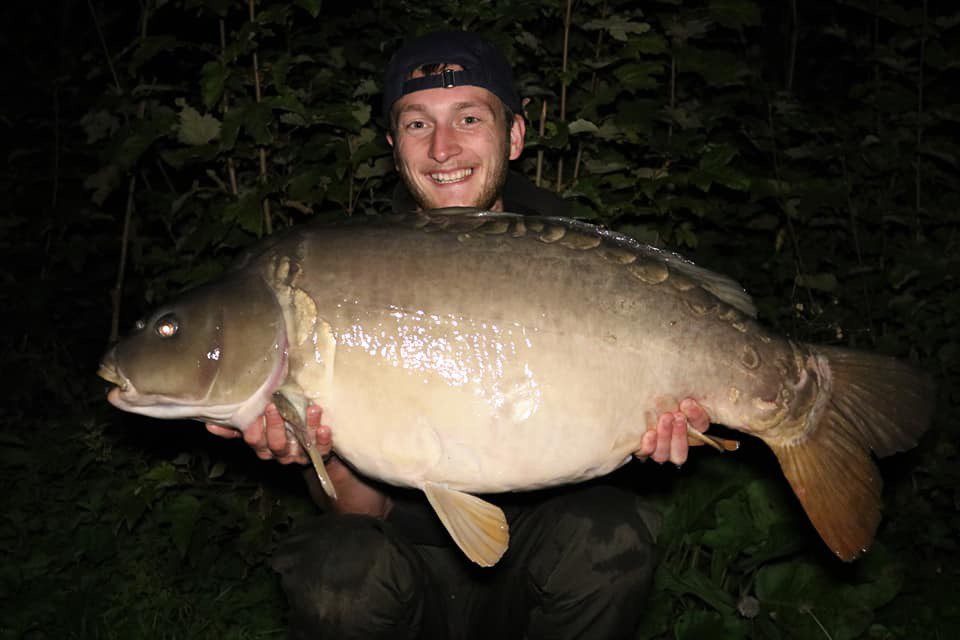 On the third and final day, conditions looked spot on as the weather turned overcast again, and the fish obliged. Mark T took a couple mirrors of 27lb and 30lb 4oz, fishing over a large bed of Switch, whilst Steven S’s little-and-often baiting approach with the S7 brought him a couple of doubles, a 27lb mirror and 36-pounder. I then had a 27lb mirror before dark over the baited area, and Billy chalked up another thirty with a 31lb mirror. 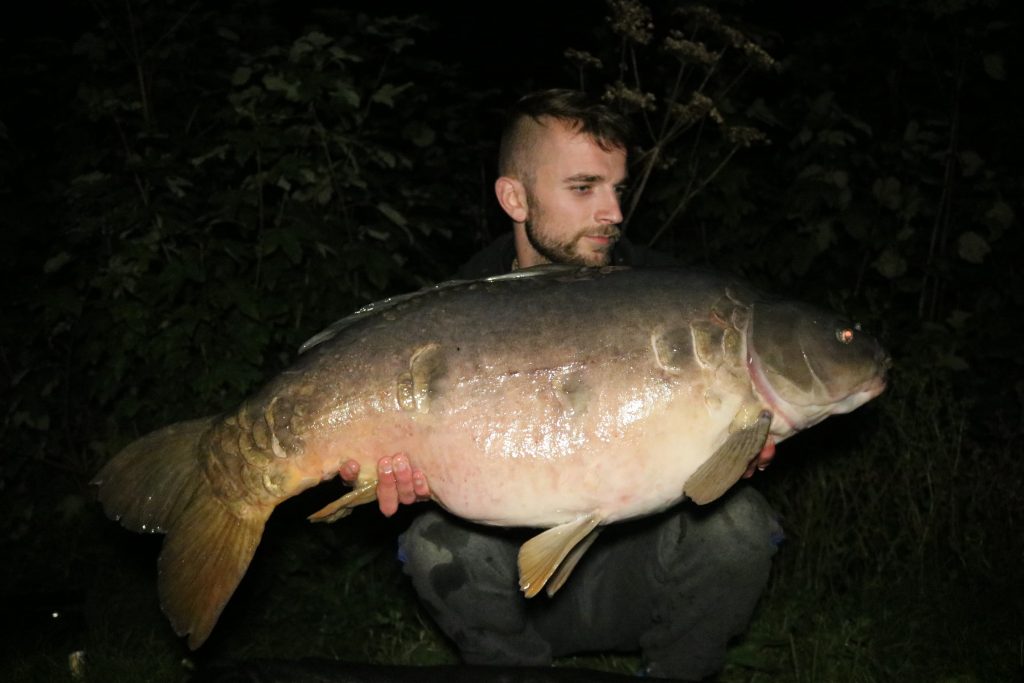 A 36lb 8oz mirror for Steve 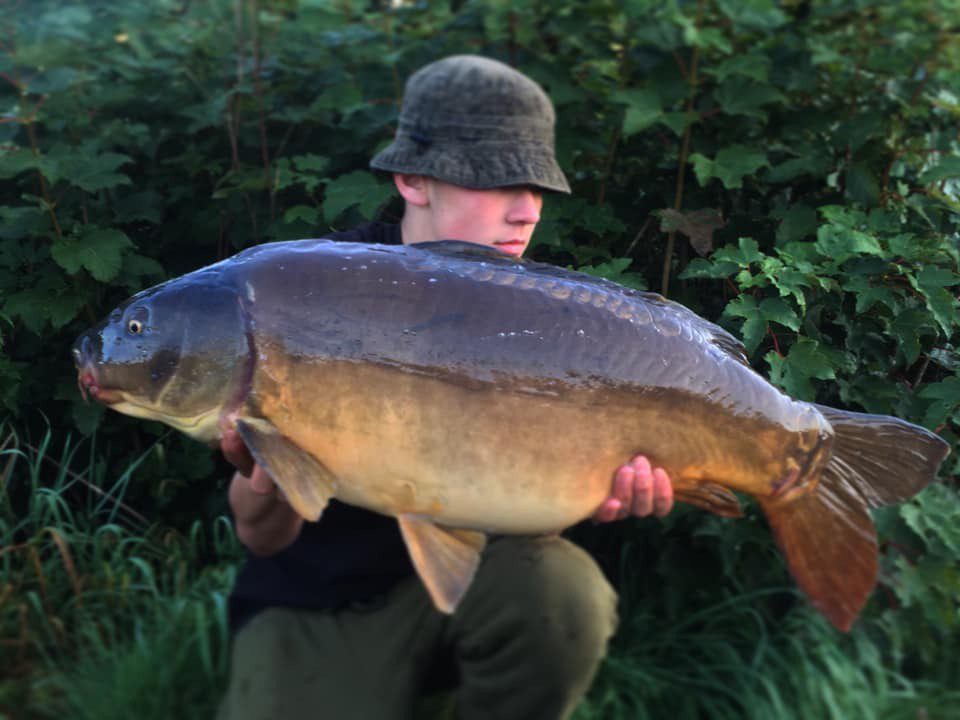 Billy chipped in with this 31lb mirror

At 6.30pm, just as I was about to eat my dinner (always the way), I had a crazy half hour with three fish at once, all on S7 dumbbell wafters but from three totally different spots. My first take came to my marginal baited area that had done all my bites so far, and as I was playing that fish, my left-hand open-water rod tore off. I lifted into it to set the hook, then put it on the floor until Mark next door held the rod whilst I battled with the fish I was playing. Then right out of the blue, the rod on my short-range baited area to my right also went into meltdown and I couldn’t do anything about it until Mark T came along to assist. After an immense battle I finally landed a stunning zip linear of 21lb. I quickly grabbed the rod Mark E was holding for me and went on to land a 33lb 6oz common, which meant both my nets were now occupied. As I took the third rod from Mark T, he went to retrieve a third net for me and was back just in time to slip it under a big-framed 40lb 6oz mirror. Adding a generous amount of NuttaS Hydro Spod Syrup to my spod mix on the open-water spots definitely got the fish homing in to investigate, and I managed one more, a 36lb mirror, before finally reheating my stone-cold dinner at about 10pm. 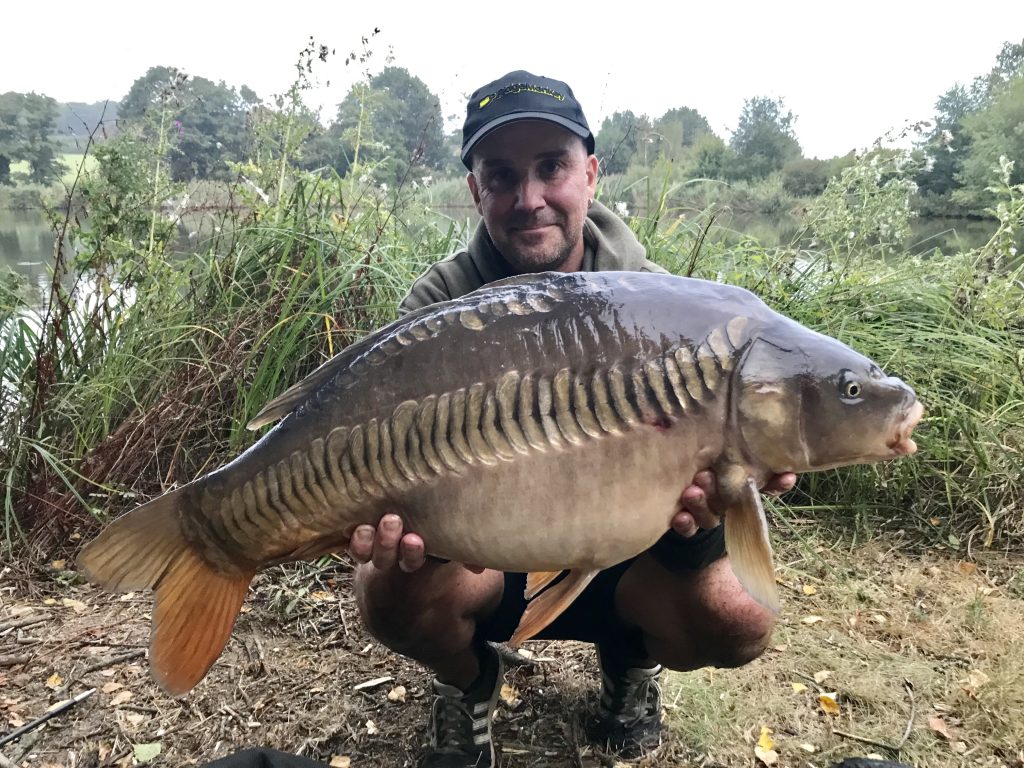 A 21lb linear that kicked off the frantic spell 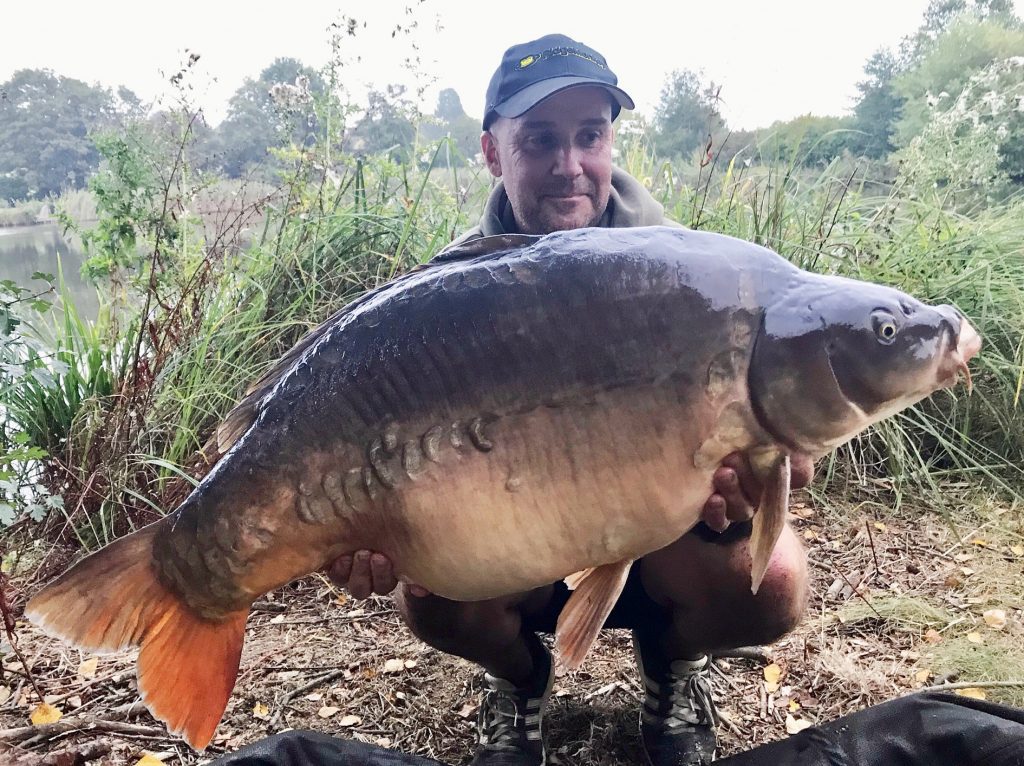 I was over the moon to bank another Elphicks forty

The last 12 hours of the session saw Dan land an 30lb mirror, and David bag himself another 24lb mirror on the Milky Malts, while Mark T had the last word with a 30lb mirror on a PB pop-up. 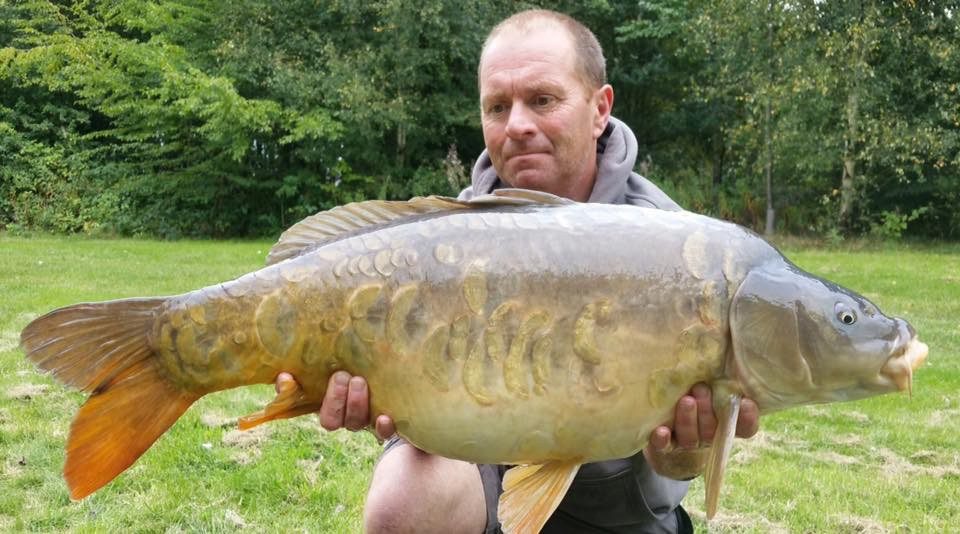 Mark T had the last word with this beauty

The final tally for the three nights was an arm-aching 57 carp, with 47 of these falling to DNA Baits. They included three forties to 47lb 8oz and 19 thirties, five of the thirties being over 35lb. It was another action-packed DNA social and I for one can’t wait to do it all over again!