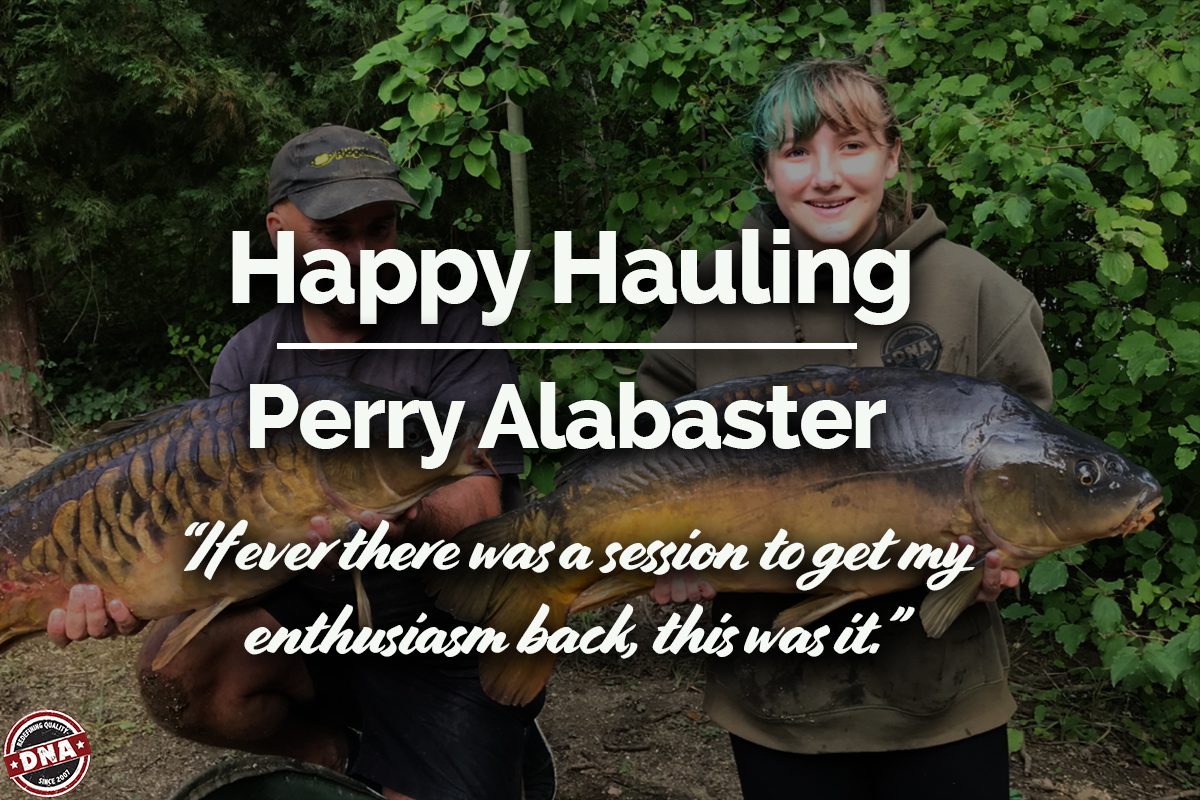 As the year flies by and autumn approaches, I think back to the fishing plans I had for this year and can’t help but feeling a bit deflated. We’re all sick and tired of the words ‘Covid’ and ‘Coronavirus’ now, as the pandemic has affected us all in different ways. There’s no doubt that purely from an angling point of view, many have benefited from the bonus hours on the bank, whilst others have struggled to find the time; there doesn’t seem to be any middle ground. I’ll try not to sound too green-eyed when I say that, unfortunately, I’m part of the latter.

The year got off to a flying start for me, with a couple of cracking 39-pounders and two new forties from Elphicks under my belt, so I wasn’t too disappointed when the country went into lockdown and fishing came to a standstill. The break would be an ideal time to sort the gear out, make hundreds of rigs and prepare for the coming season on a new syndicate water, but after six weeks of no work or income, plans changed drastically, as business suddenly picked up and fishing had to wait.

I’d only done five nights on the Essex Manor and was yet to get off the mark when Matthew Carr, a mate from Elphicks, invited me and my daughter Lucy for a session on Plantation Lake. We accepted the offer and had a great couple of nights’ fishing down there, catching fish to upper twenties. The size of the fish seemed more irrelevant than ever; we just enjoyed being in the outdoors and getting a bend in the rod. As usual, Lucy caught the biggest fish between me and her – how do they always do that?

I didn’t get another chance to fish until mid-July, when the two-week quarantine rule was lifted just in time for Brits returning from France, so by the skin of its teeth, a week at Mar Peche was on. Mar Peche is a stunning venue and is home to some huge carp, but they don’t give themselves up easily. I tried everything I could that week to get a bite, but nothing worked. The trusty Secret 7 I have so much faith in couldn’t even bring me any joy, as the resident crayfish quickly found any beds of boilies. On the penultimate morning of the week, as I sat there looking out at the water hoping this wouldn’t be my first-ever French blank, two kingfishers perched themselves on my rod. If ever there was a sign, a moment to bring me luck, this must be it, surely? Was it f***! Blank! 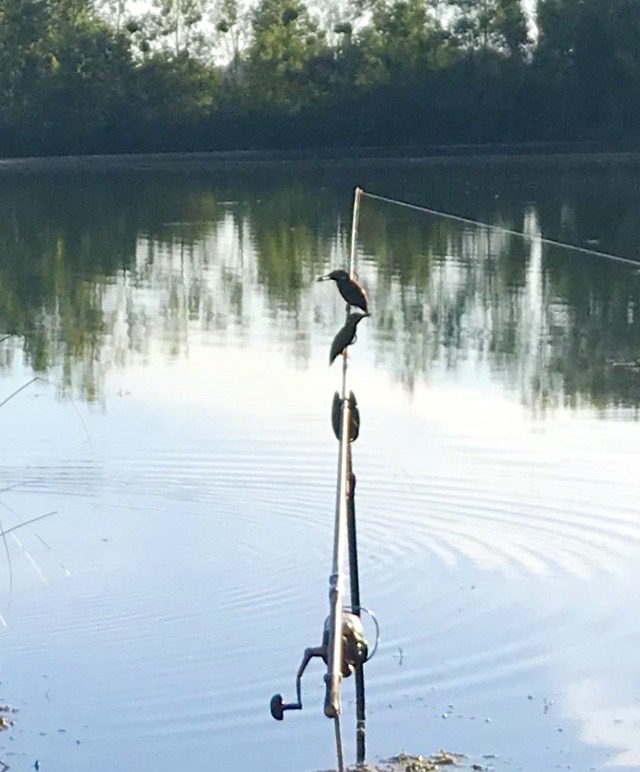 Not so lucky at Mar Peche

Back in England and still struggling for bank time, I was beginning to question myself, my tactics and even as to whether fishing was at all worthwhile. It’s really strange admitting that because anyone who knows me knows I absolutely love my time on the bank and have complete confidence in the methods I use, but when times are tough, these negative thoughts can still creep up on you. I don’t think a fruitless week on a difficult French water was the sole reason I began feeling this way. Let’s face it; it’s been a pretty rubbish year all round for obvious reasons, but something really had to change for the better to get my enthusiasm levels back up.

Soon after returning from France, a local mate, Roy, asked me if I fancied a little three-nighter on Poachers Pool, which is the small water next to Meadows Lake at Holme Fen. I had planned on cutting down on these lake exclusive socials this year, as they take away syndicate hours, but this felt important. I’d already lost a very close fishing pal to suicide during full lockdown and I’m convinced had he been able to get to his ‘happy place’ and fish a few months back, he’d still be here, so this chance to fish with a couple of friends was gratefully accepted.

Poachers Pool doesn’t contain anywhere near the number of giants its neighbouring Meadows does, but there’s a few nice thirties present and plenty of back-up doubles and twenties. I took the remaining maize and hemp from the French trip to Poachers, but decided to go in mainly with an S7 approach. It’s ridiculous when you even start to doubt a bait that has worked so consistently for you over so many years, but I still felt I needed to catch on S7 to reassure myself. I found a nice clear patch in front of a weedbed straight out in front of me and chucked out 10 Spombs of chopped S7 and hemp, all coated in S7 Liquid Food on to the spot. My rig/hookbait was an S7 snowman consisting of a 15mm Hard Hooker and a trimmed-down Corker pop-up glugged in the matching Liquid Food.

After the first bite, I started to stick out about 100 15mm and 18mm S7 freebies over the Spombed area to keep the fish searching for baits. This session was all about the S7. Even the weather was S7, with a gentle 7mph southerly. 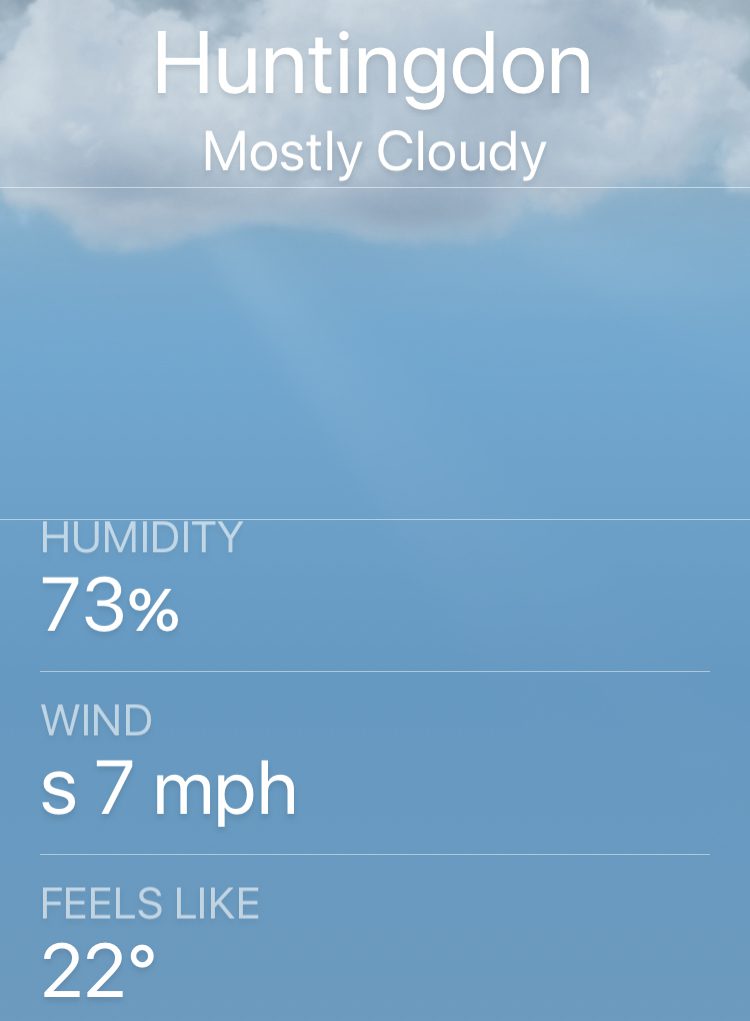 Even the weather was S7

I lost a good fish in a snag to my right, which was gutting, but the baited area produced two more fish to low thirties and finally the confidence in my own ability was being restored. 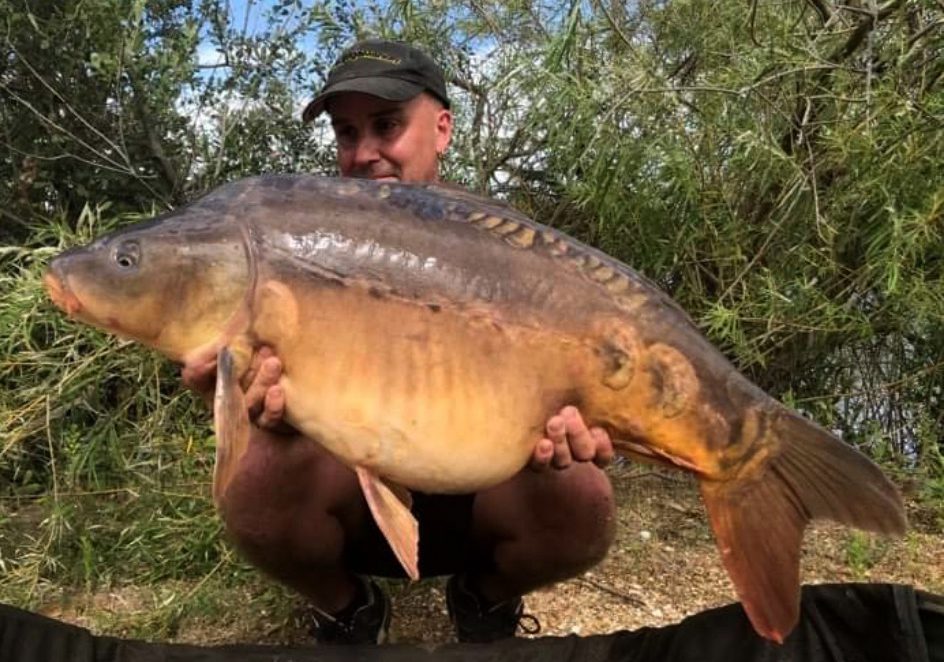 My confidence was restored

As the infection rate in France rose once again and a pre-booked Abbey Lakes trip for October already looking iffy, I took a big gamble and rang my old mucker Dave Smedley at Abbey to see what was available for a Saturday to Tuesday three-nighter. The wife, Julie, and Lucy were owed a break from the house, after missing out on a cancelled family holiday this year, so with the kids on summer holidays, we booked Wild Boar Lake and set off for France again.

The gamble of hoping we’d miss the inevitable self-isolation rule returning was badly timed, as that came into effect just after we left England, but there was no going back now. When Dave said Frog Lake was available due to a no-show, we jumped on that. Frog is normally a Saturday-to-Saturday lake exclusive venue and definitely the runs water of the complex. With a good head of twenties and the outside chance of a thirty or forty to go at, it would be the ideal venue for Lucy to hone her skills.

As we began setting up, I noticed a group of carp milling around near the surface at about 75 yards range. There was a lot of fizzing and bubbling coming from the vicinity and I couldn’t help resist quickly setting the net up and casting one rod amongst the group of fish. Within a couple of minutes it was away and a low twenty was soon in the net. This was going to be a hectic session!

We finished plotting up home for the long weekend ahead and tried to get the other rods out, but no sooner did we get two or three rods out than one would scream off – it was that prolific! That pattern continued throughout the day, and by dinnertime we were already into double figures. Again, the S7 approach was proving irresistible for the fish. We used the Hard Hookers to avoid the attentions of any nuisance crayfish, but the carp didn’t give the crays a look in! We chose to wind in for the night and just fish days only, which worked well, as day two continued in the same vein. Lucy landed a couple of nice 26lb mirrors in the afternoon and I landed a 34lb mirror just seconds after she had bagged a PB common, so we got a nice dad/daughter brace shot of the moment.

The rarity of me fishing with Lucy and actually catching the biggest fish so far didn’t last long, as later she hooked into something much bigger, even though she initially thought it was a bream. The take she received on the PB pop-up she’d boated out with some chops and maize hardly bent her 10ft rod over at all as she played the fish to the bank, but as it got nearer the bank, I caught a glimpse of her catch and just told her to start waking back a bit. I netted the fish and all hell broke loose in the net, as she came to look at her ‘bream’. It turned out to be a 42lb grass carp. I’ve been lucky enough to land a huge grassy in France before, which went mental out of the water, so after this one beat her up on the mat, we both agreed that even though it was fantastic moment, we never want to see another grassy again! 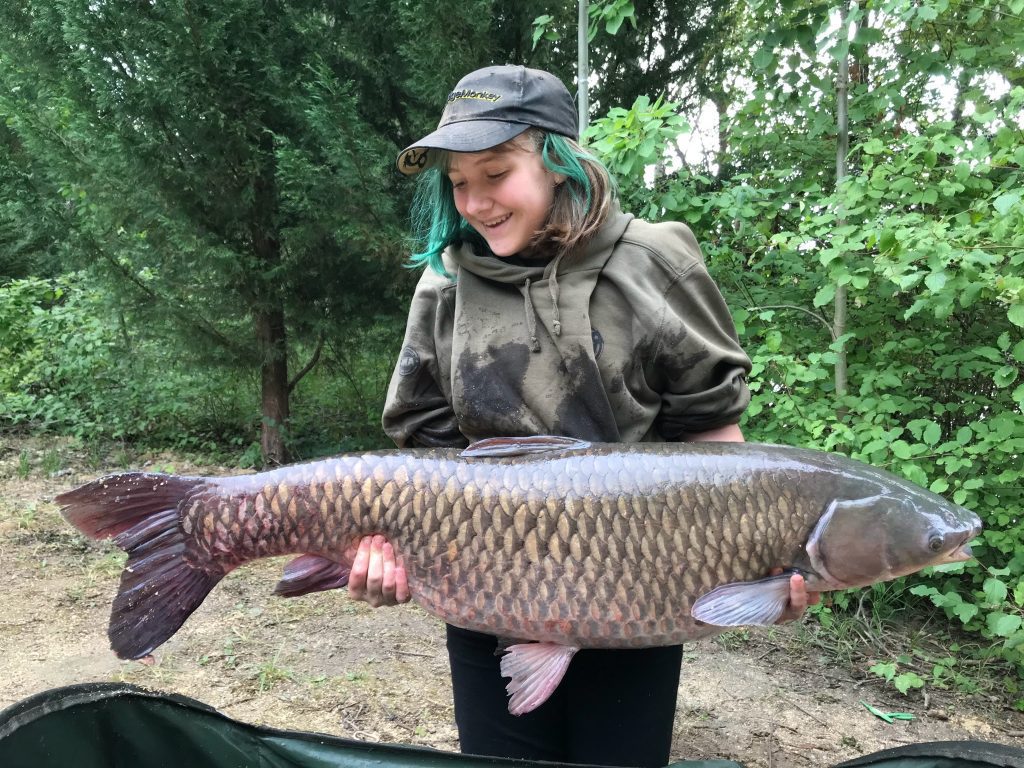 On our final day, the action continued, as Lucy landed another 26lb mirror just as I was unhooking a lovely fully scaled 20lb-plus mirror, so Julie took another brace picture, which will no doubt grace a wall at home soon. 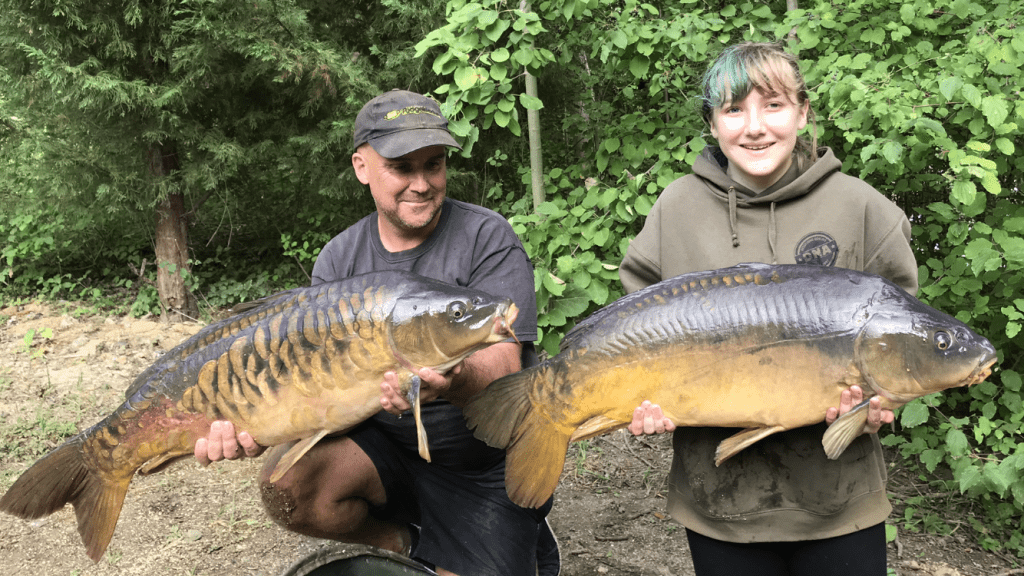 A special moment at Abbey

We agreed to put one rod out each as darkness fell on our third and final night, but they weren’t out long. Within 10 minutes we were both playing a carp at the same time. Lucy got hers in first from closer range than mine and it turned out to be a 28lb 4oz mirror on the S7, which matched her PB mirror. Then eventually I netted mine, which turned out to be one of Frog Lake’s biggies at 41lb. We decided that would be a great point to call it a day. 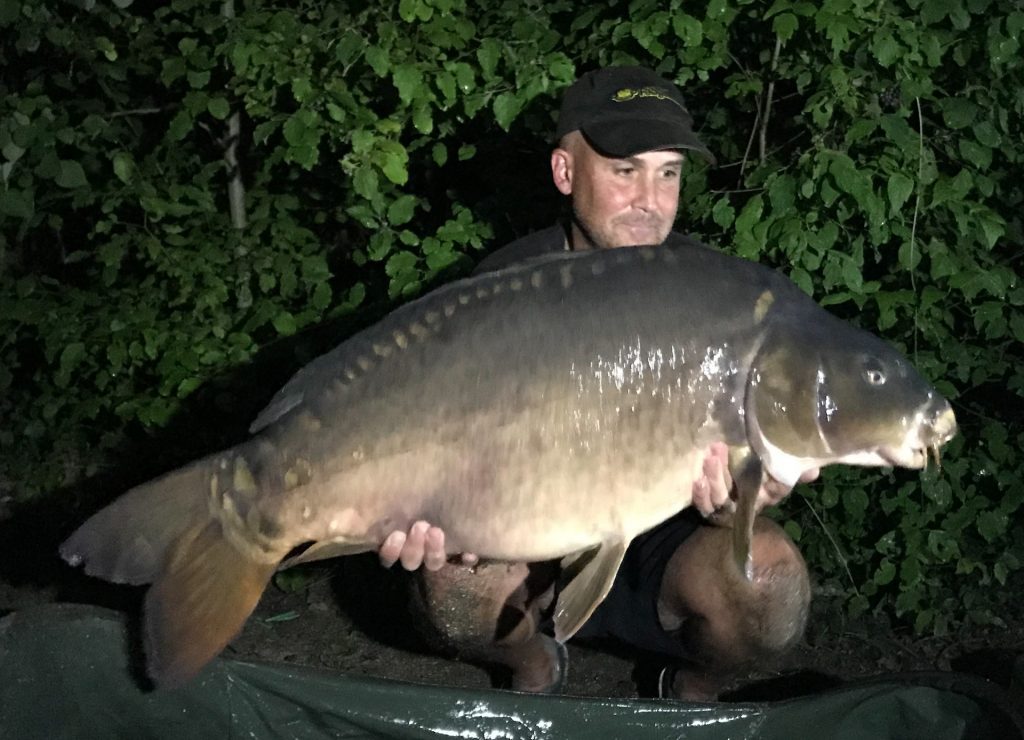 A 41lb Frog Lake mirror caught on the S7

On the Tuesday, I was up at 6am and couldn’t resist putting my three rods out one last time before packing down and lobbed Lucy’s rod out to some fizzing over to the right whilst she was still in bed. Within 30 seconds, Lucy’s rod was away, so I hit that while trying to wake her up. Getting 14-year-olds out of bed is never easy! I ended up landing that one, but the other three rods all did fish over the next half an hour, so Lucy landed a couple on my rods to even things up a bit. With those bonus carp added to the tally, we ended up with 37 fish between us.

It wasn’t the sit-and-wait, big-fish angling that I’m used to, but it was an enjoyable trip with some magical moments, and if ever there was a session to get the enthusiasm back, this was it.