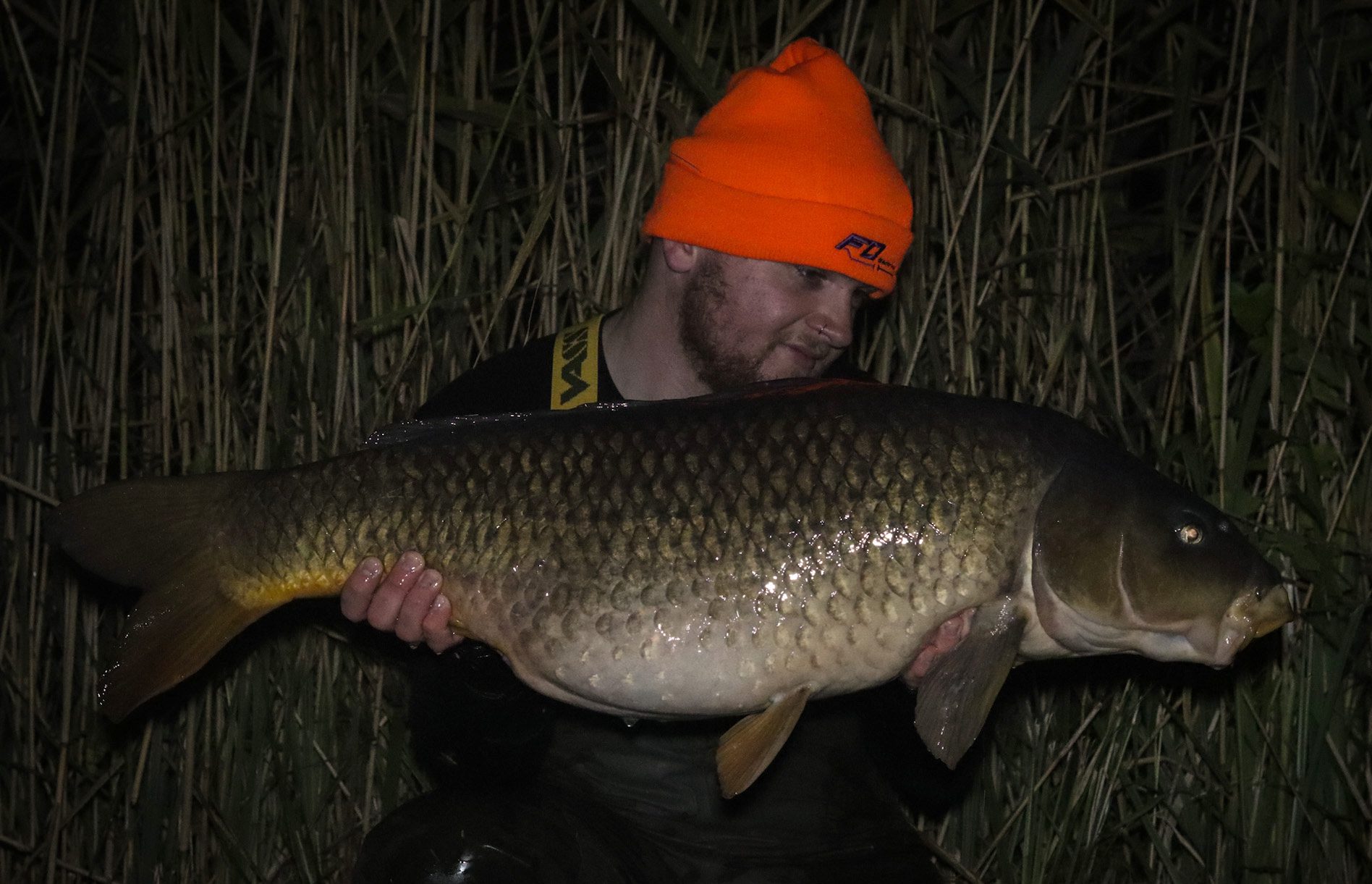 We don’t get to see too many catches from Collins Lake on the Newbury Angling Association ticket, as it is far from an easy water, so this one really did catch the eye!

After months of hard work, Frazer Deadman finally got his hands on one of the lake’s elusive fish, a 30lb 2oz common, which snaffled his white Secret 7 Half Tones pop-up over crumbed and whole SLK boilies, tigers and SLK Hydro Spod Syrup.

Frazer gives us the full story: “After catching a 32lb mirror from Knotts back in June and another couple of high twenties, I felt I was ready for a move on to Collins. There is a big difference in lakes in terms of features, depth and stock, but the main thing being the difficulty due to the amount of pressure it sees. Collins is only 8/9 acres and has no more than 50 fish, all being a good size, but hardly any come out.

“After a couple of nights blanking during the summer, I saw a lad having a bit of luck on big bed of particles, so thought I’d try my luck. This tactic soon come to an end, as it wasn’t paying off and work was getting manic again, so my overnighters faded to two a month and I couldn’t get a spot going due to people fishing them. No matter how many times I lapped the lake looking for subtle shows or bubbles, it just wasn’t happening. However, I kept pushing on, hunting for that bite, knowing damn well it was going to take some dedication and patience.

“I arrived at the lake one Monday and everything looked bang on, as I actually managed to find them for once. I rang my mate and told him I was having one tonight and he agreed, so I stayed up late watching and noticed they had started showing mid-water over a gravel bar that sees a load of bait, so I knew they must be on the feed. Then they started showing over my spot and I went to bed buzzing!

“At about 1:30am, I woke up freezing as a disgustingly cold NE wind was blowing straight into me. The only time I didn’t check the forecast and it had done me over. I was gutted! So, I decided I was going to come back on the Sunday for an overnighter and pull off early Monday to go to work, as I could see the weather was going to be bang on.

“Sunday came and everything was going fine. I got to the lake and couldn’t get in due to me forgetting my gate key, which was a result of a midweek walk with the missus on some of the rivers on the ticket. So, I had to drive 30 minutes back home to get it and, whilst I was at home, I spotted my camera, which I had also forgotten. I eventually got back to the lake around 3.30pm and was just lapping and lapping and lapping until eventually I saw some faint bubbles appear right in the centre of some pads, and that was enough for me to set up! The weather was bang on and I was sitting in the swim looking out and thinking about sleeping under the stars. I saw a dandelion floating across the lake and thought I’m all for wishes and saluting magpies, then it dawned on me that tonight was my 16th night, and eight happens to be my lucky number. After all, my birthday is 8th August and I always do things in multiples of eight, so I was certain I was having one.

“I eventually got the rods out and I was just sitting there when an almighty bang went off behind me. Then another and another! Someone was having a firework display and I thought that had definitely blown it, as it was dead quiet when they went off and I thought surely it would have spooked them.

“It got to 1am and I started to hear them crashing out in the pads. ‘Surely not,’ I thought. Eventually they drifted off again. I remember slipping into a dream about going for a run and how I had bought some new trainers. As soon as I bought the trainers, my receiver beeped and I woke up in shock and instantly went to check it, as I was fishing locked up tight to the pads. Then it beeped again and the bobbin slowly started making its way up to the top. It was definitely on, so I hit it and was met by this lump of weight and absolutely bricked myself, as it felt like I hadn’t played a fish in so long! I eventually got it in and just went to sit on my bed, shaking with excitement, thinking I’d finally managed to bag one. What a moment!”