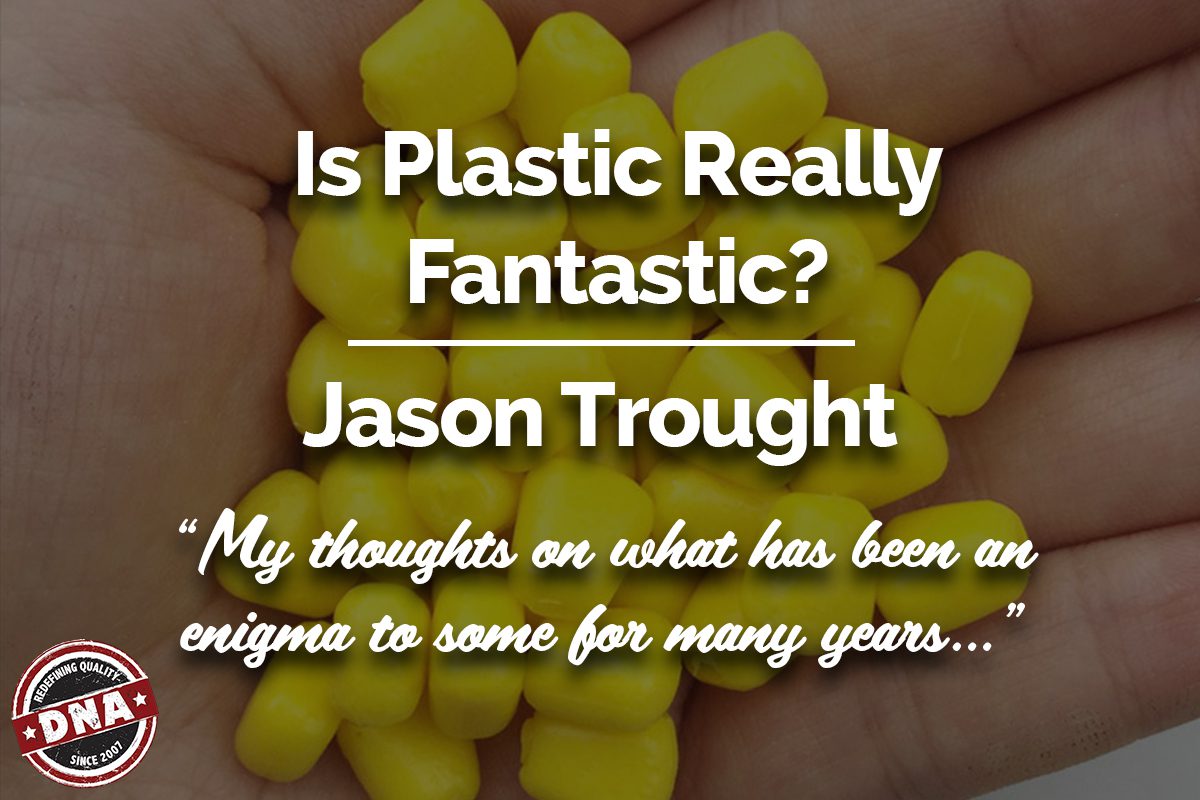 Although plastic corn has been around for years, it seems there has been an upsurge in other types of artificial baits also being brought to market over recent years. Now, I can hear what you’re thinking: “Yeah, yeah, here we go, bait-company gaffer having a go at plastics because it means people don’t buy his bait.” Not at all, because whilst I believe a bit of plastic will never out fish a quality food bait over the long term, there are occasions when against the odds they produce a bonus fish. You will even find the odd piece in my own tackle box if you take a peak, and I’m a sucker for a bit of black foam when zigging!

No, being in the industry I’m in, I will always analyse anything that is said to attract carp. It’s in my make-up, I’m afraid; I am never content with the explanation of: “It just works.” I’m just trying to understand why they work, and why after my findings it’s my opinion, for the future health and longevity of our carp stocks, use of the current types of plastic baits maybe isn’t always such a good idea. Please don’t misconstrue this article as a dig at the companies releasing these, as it’s not. At a time when it seems fashionable to knock people in the trade for making a buck or two, maybe we should be looking at ourselves to see why companies are releasing these types of products. It is simple business economics: supply and demand for a molly-coddled carping/camping generation. These are simply my thoughts on what has been an enigma to some for many years, and I hope to dispel a few myths along the way.

Okay, why does plastic work? There have been lots of opinions bandied around over the years, from “It’s the fish oils in them, innit, mate!” to “they love sweetcorn in ’ere, tha’ knows, lad.” Now, firstly, let’s dispel the fallacy regarding fish oils. To do this, let’s think about this a bit more literally. During a time when the world’s fish stocks are in decline, fisherman are being subject to strict quotas and fishmeal prices are sky-rocketing; it is safe to assume that expensive fish oils are not financially viable to use in something as huge and resource-hungry as plastics production when litre for litre fossil oils are much cheaper. So, it’s fossil oils (the same as used for fuel) that get used in plastic production, not fish oils. “Okay, so it’s still got oils in it, though!” Right, whilst we’re putting myths to bed, let’s do another. Here we go, bit of a shocker this one – carp can’t detect oil in water! This article isn’t the place for a detailed bait discussion, so I will adhere to layman’s terms to save time and column inches. In a nutshell, carp can only detect substances in water that are soluble, either partly or fully, through their olfactory bulb (in a loose sense, the carp’s nose). Oil, in its inherent form, isn’t soluble, so it will not be detected through the carp’s normal means of investigating food sources. There are trains of thought that also believe there may be fractions of the oil that may be detectable, but for now, this is in theory only, so we will leave that for another time. Easy, eh?

Does this mean oil is useless? No, it certainly doesn’t. Carp have an organ within their mouth that detects whether the object they have taken in is food or not. This is how it ‘tastes’ its food, if you like, and determines whether to digest it or not with the unwanted items being expelled. Fish oils and most food-grade oils in general are a valuable source of lipids (fats) to a carp when included within baits, and it is during this ‘tasting’ that the carp will make the decision as to whether it wants/needs this particular source of fat. Also, the properties of oil molecules mean they will always travel to the surface of any water column and so can, in turn, take with them any minute food-based particles or amino acids that may be attached to the molecule, but this, of course, doesn’t apply to plastic hookbaits. However, it does explain why some anglers believe the oil works as an attractor for them. The facts are in this case, though, they aren’t ‘eating’ the piece of plastic, which means there is no way they can be attracted to any oils the plastic may or may not contain. So, we’re done with the oils theory? Okay, let’s move on.

Right, so what just is it that makes plastic attractive, as undeniably there are times when it will get you an extra bite? This is probably where things get vague, as these are my opinions only, based on a little scientific fact, some chemistry readings, the relevant bait knowledge and plenty of time on the bank. What I’m saying here is, don’t string me from the rafters if I get something wrong!

Okay, so part of my theory comes down to not the plastic (PVC) itself, but the plasticizers used within the product to keep it soft, i.e. so you can stick a bait needle through it. The most commonly found plasticizers used in flexible plastic production in recent years have been Phthalate esters, which are the esters of Phthalic Acid. Still with me? Good! If you’ve been around carping for a while you will be more than aware of ester-based flavours being used in carp bait previously. Although slightly different, they are esters none the less. Phthalate esters have actually been found to be toxic to aquatic life, but fear not, in such small quantities, and within an item that is inedible to the carp anyway, there is nothing to worry about regarding their use. Plus, I believe their use is now on the decline in plastics manufacturing anyway. That said, I did hear a story a few years back where someone was moaning about the cost of baiting up with this new-fangled corn! Sends a shudder down the spine, doesn’t it? Sorry, I digress… These aforementioned, let’s call them ‘bad’ esters to make things easier, will still act as investigation triggers for the carp. Some, if not most, of these plastic items now sold are also flavoured during the manufacturing process. This will go even further in aiding the carp to seek them out the baits via localised PH changes, which may also explain why the fresh out-of-the-packet bait is always better than an old piece. Remember, PH changes in the carp’s natural environment caused by waste emissions from insects/larvae, etc., are largely how carp detect their food sources.

So, that is one theory I’ve described that, rightly or wrongly, seems to go some way of explaining why plastics may be effective in murky water or during the hours of darkness. My second theory and, to be honest, the one I feel is the main reason why plastics work is that plastic baits, more often than not, are brightly coloured. I believe they are simply sight markers for the feeding carp, causing them to investigate something alien within their environment. Even during the dark these colours will still be obvious to a carp, visible as a differing shade of grey as to what the bait is sitting on.

“Why bother with all the earlier scientific mumbo jumbo then, mate, if that’s what you think?” Let’s ask ourselves, what other flexible plastic items are used within the parts of our set-up submerged in the water. Beads, hair stops, bait stops, chod rubbers, shrink tubing, anti-tangle tubing, anti-tangle sleeves, lead clips and rubbers… There are quite a few, aren’t there? These are all made using the same substances used in the manufacture of plastic baits. Are these also acting as investigation triggers? Probably, but you don’t hear much mention of people saying they had a take but it dropped off because it only had hold of the chod bead, do you? As much as I do believe the chemicals leaking off the plastic items do work as an initial investigation trigger, I truly believe it is the sight aspect that eventually gets us the bite with regards to a plastic bait.

Now we’ve discovered just why they work, let’s move on to something slightly more contentious. It’s something I mentioned briefly in the earlier part of the article: fish safety. Whilst we’ve admitted they do work and perhaps discovered why, maybe we should ask ourselves whether it actually responsible to use something as a hookbait that doesn’t have the ability to break down naturally? You don’t have to look at many pictures of some of the discarded/lost rigs found in lakes nowadays to see there are more than a few occasions when the plastic bait, if used, is still there. The hook may have rusted, but the plastic bait generally looks as good as new! Surely if a rig is lost/cracked off and it encompasses some form of fake bait, that rig is fishing effectively for the full amount of time it is in the water? Is this the reason we now encounter so many trailers on waters we fish and could it also be the reason why I believe many commercial waters are now banning any kind of plastic bait? Rightly so, in my opinion. Of course, nobody purposely goes out to leave discarded tackle in waters (accidents happen), but maybe we all should be thinking about what happens if we crack off before we use such a bait. In certain situations, they are brilliant, but for long-range or snag fishing I think we should look for an alternative due to the possibility of losing gear. Regardless of my own commercial situation, you will find most bait companies offer a range of fluoro-type products that, in my opinion, can be used in exactly the same way as these plastic baits and just as effectively. At the end of the day, though, it is your choice.

I hope I’ve given you all something to think about anyway and hopefully people might just think a little before automatically opting for a plastic hookbait upon setting up. Thanks for reading.