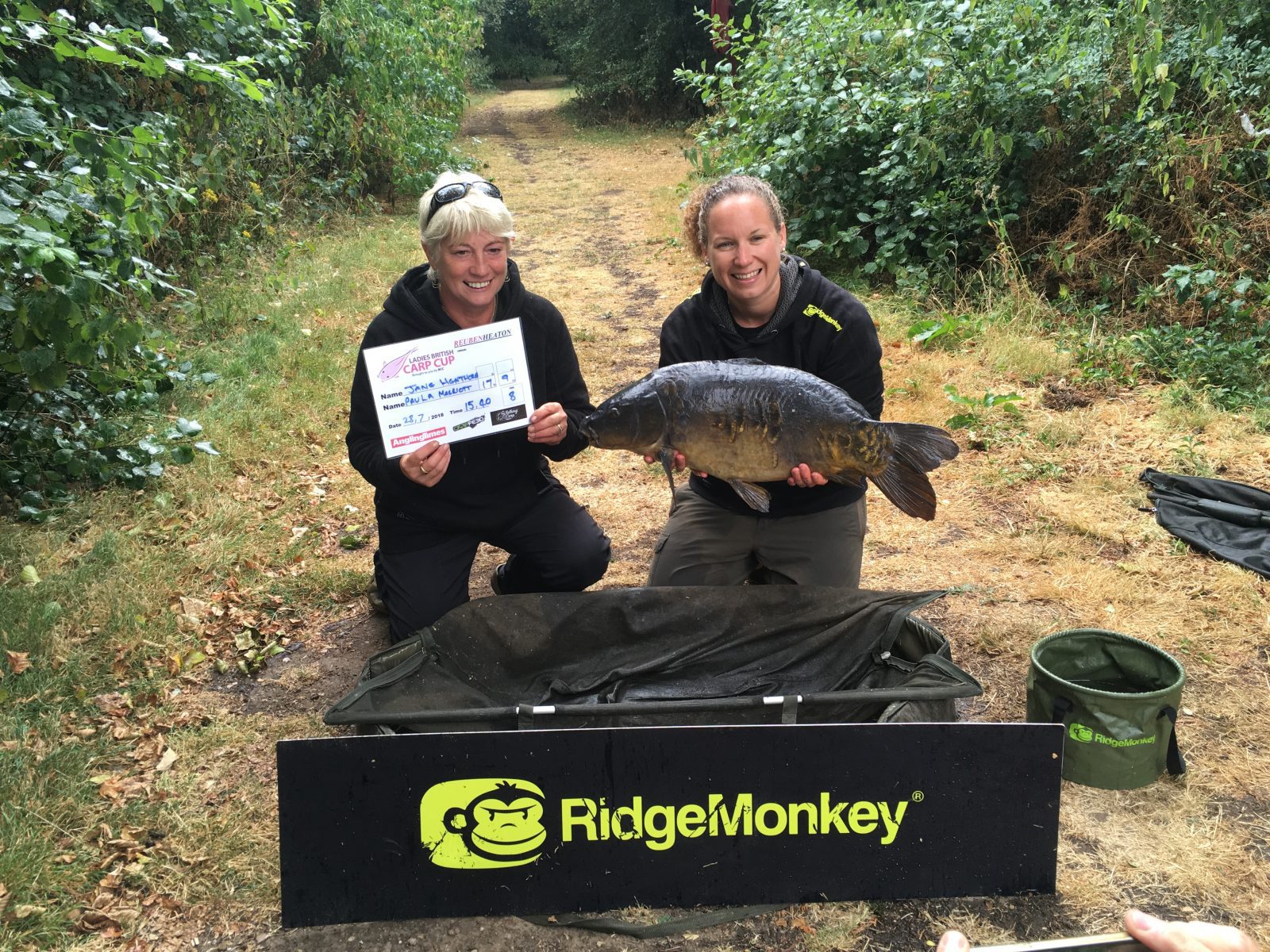 One of the great characters I’ve met is Jane Henthorn, a formidable lady and a fantastic angler (the current singles champion), and she was set to be my partner for the pairs event, which would be our first match together.

I arrived at the venue a little before sunset on the Thursday evening, with Jane set to join me on Friday morning. I made a grab for my lake map, notepad and pen and set off around the lake for a walk round before I lost the light. As with all matches, I like to make lots of notes about what I can see in front of me, and this lake was quickly using up the ink in my pen! I noted fish locations, the time I’d seen them, and any other notable features.

Later that evening, after a tin of Aldi Pinot and a nice chat with the Welsh contingent, I jumped on my bedchair under the night sky, with my alarm set for 4.15am ready for my next walk around the lake.

It didn’t take long for 4.15am to come around and I had to admire the Welsh girls’ commitment too as they set off around the lake as well. The same picture I had painted of the lake before had started to form on the new map in front of me. Also on this map, I started to note in order of preference what pegs I would favour in the draw later that morning.

Jane arrived and penned her own map and order of preference, and luckily for us, they weren’t too dissimilar. The draw was soon upon us and we couldn’t believe our luck when our names came out first. Without hesitation, we picked peg eight and watched as the rest of the draw unfolded. 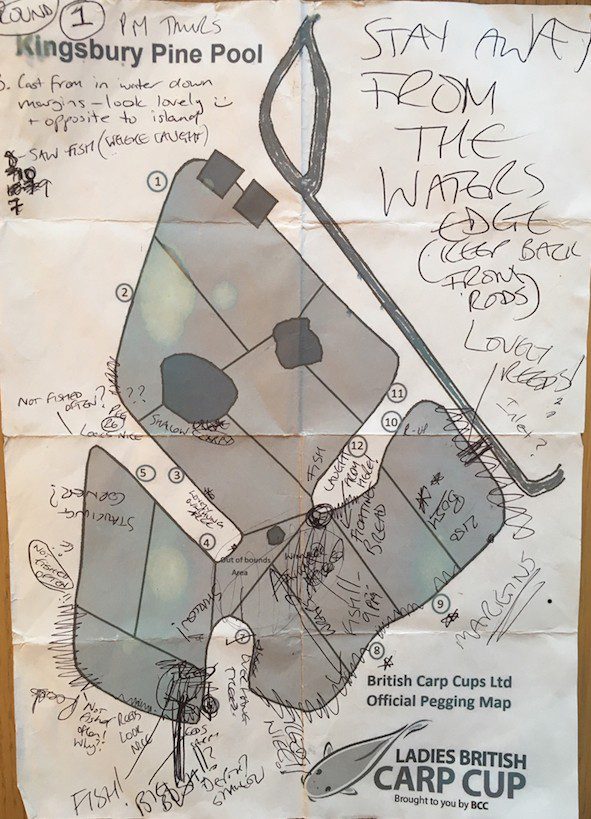 We found our spots and executed our plan. I wanted to be stealthy when it came to introducing my hookbait, so a 10mm Milky Malt pop-up was cast out with a small 1.1oz lead and a short stringer of 12mm NuttaS boilies.

Come Friday evening, Jane and I thought it would be best to grab a couple of hours’ rest before the predicted morning’s action kicked off. I lay there awake wondering what I could do to ring the changes, listening to liners. I jumped up and re-positioned both rods just a rod-length shorter in the hope of turning those liners into bites. I concluded I would switch rigs and tied myself a neat little chod, setting the top bead at 2.5ft and silently recast again. Feeling happy, I returned to my bedchair.

I had just slipped off my Crocs when I heard the familiar sound of a screaming clutch. Looking up, Jane’s right-hand Delk was lit up like a Christmas tree. I was dazed and confused by the lack of sound. I’m too poor to own a sounder box, so when my own alarms go off, they are enough to wake the dead! Speaking of the dead, I thought Jane was (what with her age and all), as she was not waking to my calls for assistance until I hit 120 decibels and she seemed to stir. “Fish on! YOUR ROD!” I shrieked. She, of course, said my calls sounded like whispers as she casually strolled over to me while I played the fish, trying to keep it away from a weedy margin that would later prove a nightmare. I frantically asked Jane about her line and the position of her other rod as I eased the fish into our swim. Just as Jane was about to scoop the ball of weed in front of her, the hook pulled! Jane watched as the carp righted itself and swam off. She turned to me, briefly expressed disappointment for our loss, before offering words of encouragement and urging that we crack on for the next bite.

With the rod reset, Jane headed off for some essential rest and I sat awake praying for the forecast rain to start. As I sat pondering, questioning and plotting, gentle rain started to fall, and at approximately 6am, those glorious bells rang out and we were in again. After a short battle we landed our first fish, a nice 21lb common, getting us off the mark. 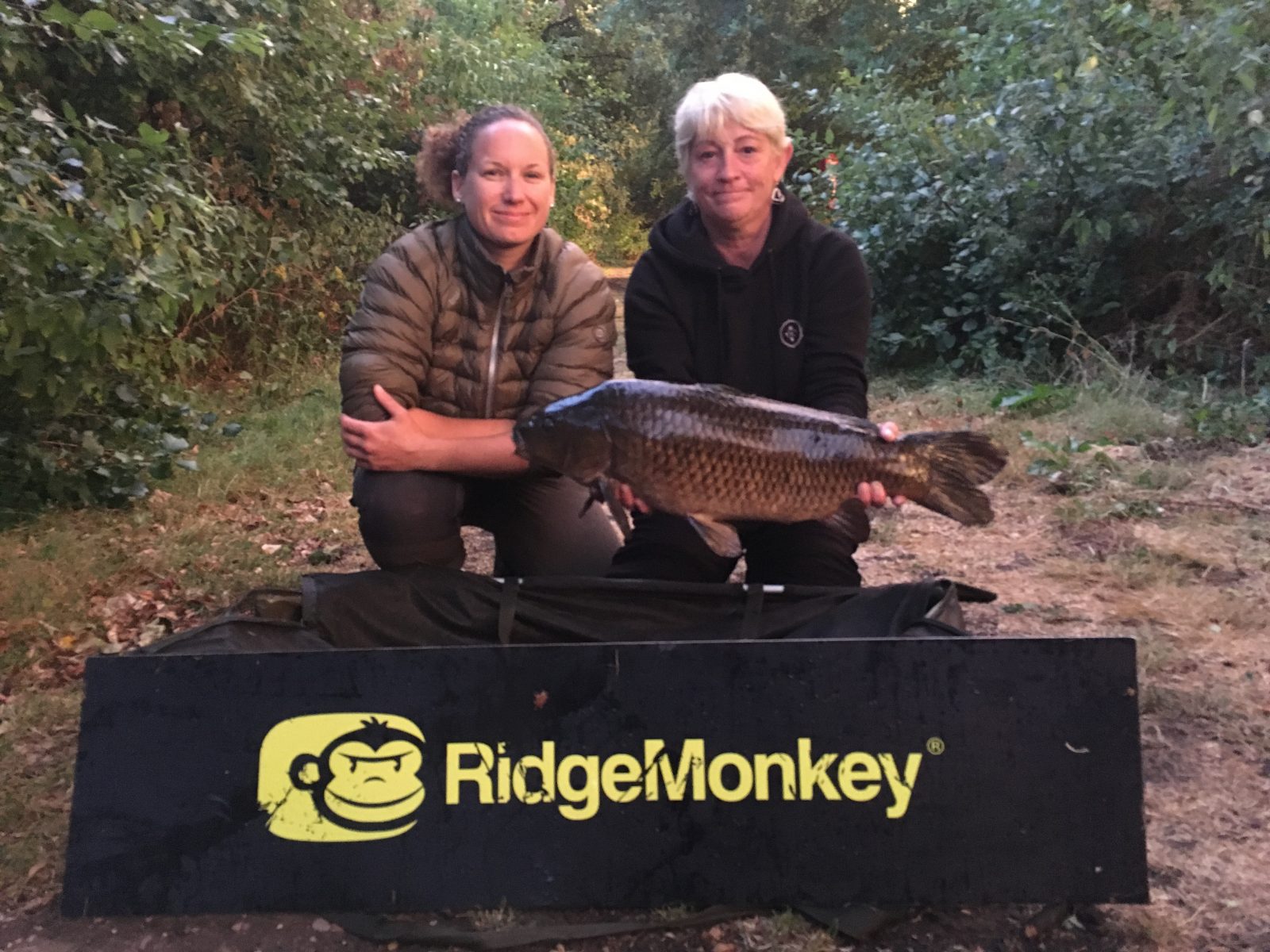 A nice common for Jane

The tactics were working and so all rods were changed to match those of that successful capture, and just a few hours later, we landed an 8lb common. It wasn’t big, but it was a contribution that mattered, and we were thrilled.

Saturday morning fell quiet and I was looking forward to a visit from my future mother-in-law, not because she brought fresh milk (and a new shower ‘soogey’, but that’s a whole different story), but because she had never seen me angle before, and it was my chance to demonstrate it wasn’t some silly hobby whereby I didn’t even cook the carp for Wigilia celebrations. She chatted with Jane whilst I cast out a few Spombs. Jane gave a running commentary she could be proud of, and the mother-in-law appeared genuinely interested. After the job was done, we stood drinking tea with anticipation and chatted with two gentlemen about the good work of the Angling Trust’s Volunteer Bailiffs Scheme. During this time, my left-hand rod lifted out of the back-rest and bent round to the left. Whatever had picked me up this time was angry and had kited like a torpedo down the left-hand margin and buried itself. As we tried to coax it out, the right-hand rod burst into life! Having passed the rod to Jane, I quickly secured the carp in the net and left it resting in the station, before turning back towards Jane. With concern the first fish may have tethered itself on a low-hanging branch, we requested that Mick Coxon offer some advice on how best to proceed. Mick picked up a rod to demonstrate if the carp was landed outside of a rod-length from the swim. it would not count. Satisfied the carp wasn’t tethered, just heavily buried in weed, we decided to leave the rod in the rest. Forty-five minutes later, having had time to sort the second carp and reset all our rods, Jane picked up the rod and started to feel some movement from the fish. With a few turns of the fish’s body, it started to move again, and along with a tonne of weed, we managed to scoop it up in the net nearly an hour and a half after the initial bite!

Landing that fish felt like a massive achievement and we were delirious with excitement. It turned out to be a mirror weighing in at 17lb 9oz, boosting our total weight and moving us closer to the top of the leaderboard with only a few pounds in it. The rain came back in and we hoped for a few more before dark.

I trickled in a bit more bait as covertly as I could. My 12mm NuttaS boilies had been soaking in some Pineapple Hydro Spod Syrup and Tuna Oil and were really starting to work their magic. Confident they were doing the business, we sat back to regather our thoughts and have a brew. 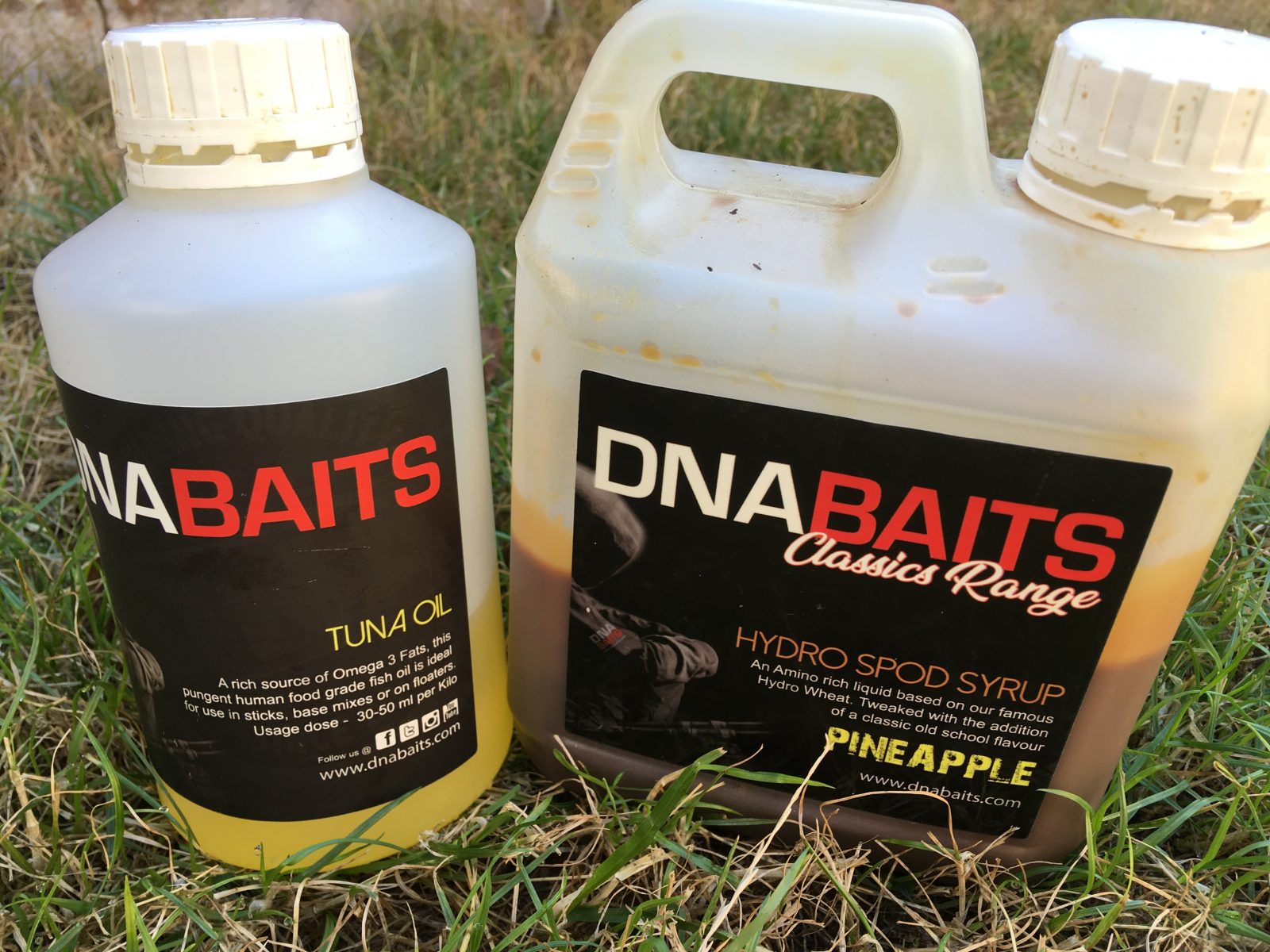 The rain continued heavily and it was gusty. At one point the wind nearly took our screen house off to the local chippy for some dinner, but Jane and I happened to grab it just in time and stomped down some more pegs. That would have been chaos! The rain eased a little and we were soon back in action with another common weighing 13lb 3oz. Darkness fell and we tried our hardest to nick a few more through the night, but to no avail. We had seen the scurrying of head torches on the opposite bank, so knew a few more had been caught.

The heavy rainfall had caused the lake temperature to drop and the carp sought comfort away from our spots. We continued to battle, recasting to deeper water even in the last hour and adding a bit more of the boilie/spod magic, but it wasn’t to be. That common the night before was set to be our last, leaving us in third place, just 2lb 6oz behind second.

Although frustrated with our position, we were also aware that England team mate, Theresa Biggs, was in the lead and we were absolutely over the moon for her. The end-of-match horn sounded and collectively we yelled out whoops, cheers and applause for her achievement.

Overall, we landed five fish from six bites, a statistic we are proud of, but more importantly, Jane and I had laid the foundations of what we hope will be something strong and formidable for the future. This match was over, but there are plenty more to come! 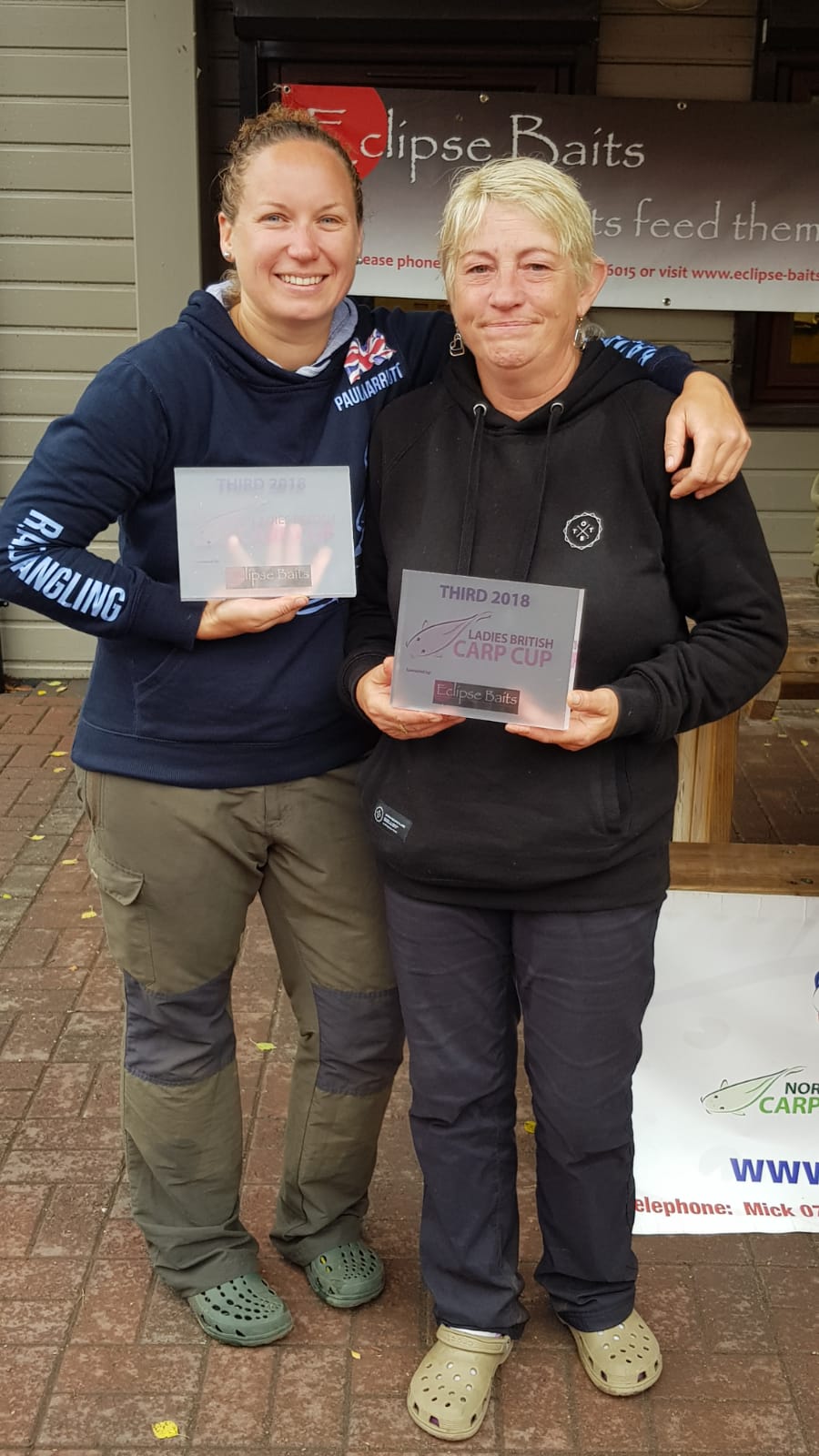 Third place overall. Hopefully there are many more podiums to come