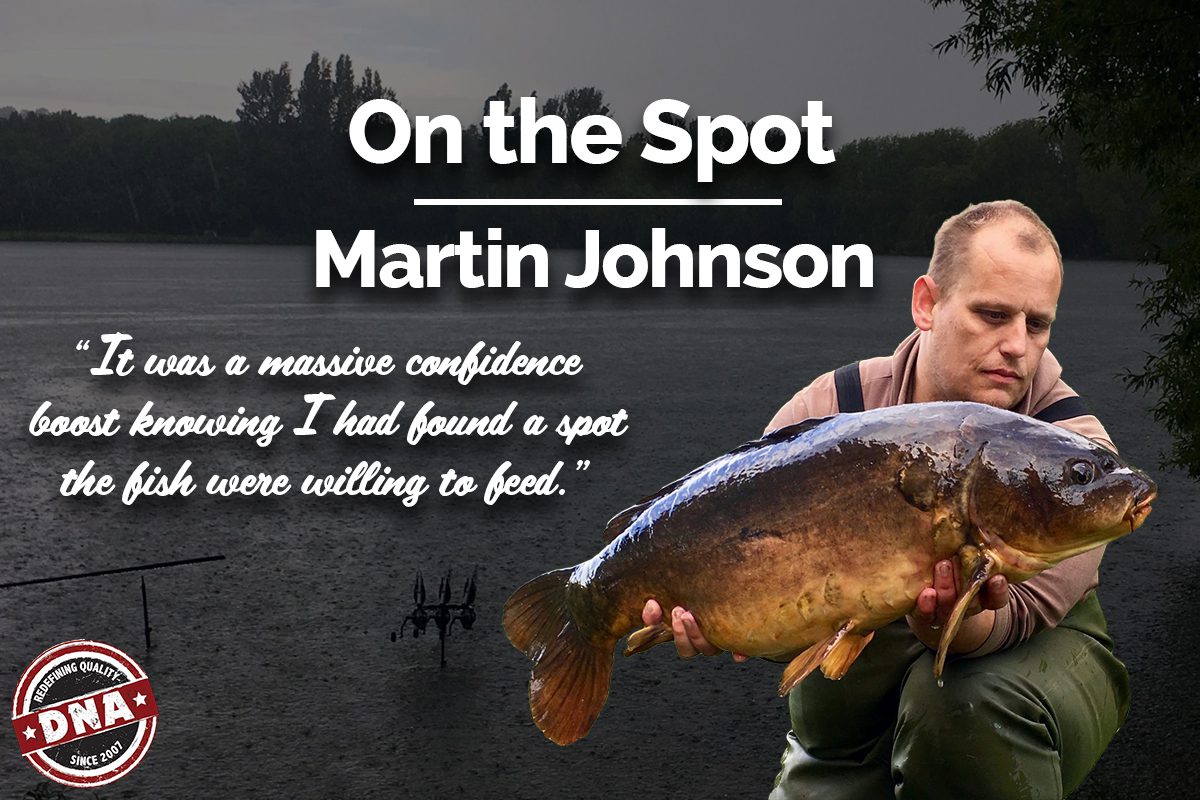 The West Lake is an old gravel pit set in a very busy country park in Nottingham. It is approximately 25 acres in size with one island and the stock is thought to be anything from 100-120 fish, with a few of them reaching 30lb-plus. It has been a well-known carp water in the area for quite a while, with some good local anglers fishing there over the years.

A wet spring morning on the park lake

It wasn’t until the season of 2016/17 I decided I wanted to try for these stunning fish that have been in this lake for some 25-30 years. I ended doing approximately 30 nights that season and was rewarded with 16 fish, the biggest of which was a 26lb mirror. I had realised by that point the lake wasn’t going to be as easy as it used to be when a friend used to fish it in the 1990s, when multiple hits of fish were on the cards.

Come the start of the 2017/18 season, I was really looking forward to getting my teeth back into fishing this water. I decided to start back in early March, with a plan to attack numerous different swims, casting out hi-vis pop-ups over a light scattering of S7 and Switch boilies to see if I could find the fish. It wasn’t until the second week of April that I was rewarded with a fish, a common of over 25lb and a nice way to open my 2017 account. I continued to fish the same way on my next few visits without much luck, so I knew I had to come up with a different plan of action.

I would walk around the lake practically every other day with the dog to try and get to know the lake a bit better and figure out a way of catching these elusive fish. On my next season, I decided I’d spend a bit of time plumbing around looking for slightly softer silty patches in and around the gravel in the hope these would be the areas the carp would prefer to feed.

Having spent a good couple of hours with the marker rod, I finally found a spot I was happy with and decided to start introducing some bait over the top. I began by Spombing out a kilo of halved and crumbed S7 and Switch boilies so the fish could clear the light silk weed that had been on the spot. I then placed two rods on the spot with 360 rigs and hi-attract pop-ups and used the third rod as a roamer, casting a bait at any showing fish that caught my eye. Later that night, the middle rod ripped off and I bent into a hard-fighting park-lake fish, which turned out to be a lovely 17lb linear. This was a massive confidence boost, knowing I had found a spot the fish were willing to feed.

I couldn’t get back down to fish for a fortnight due to one thing or another, so I was itching to get the rods out by the time my next session came along. Getting the rods in place with a good helping of boilies, I also decided this time I would introduce some spod mix to the spot, a mix that consisted of pigeon condition, hemp, a few tiger nuts and good helping of Hydro Wheat. I ended that session with five fish, including a 24lb mirror and a 23lb common, and also lost one to a hook pull, so it really felt like I had found a winning combination and it wouldn’t be long before one of the big girls showed up.

Another cracking scaly mirror, weighing in at 23lb

After that, however, I blanked for a few weeks, which I didn’t mind, as I was still introducing more and more bait to the spot I had found and felt certain it would come good once the fish got back on the bait.

On my next session down, I went prepared with a big bucket of spod mix and 3-4kg of S7 and Switch boilies in different sizes. I had given them a coating of a few different liquids and covered them in Krill Powder to try and add a bit more pulling power to my baited spots. I was rewarded that session with a mirror of 25lb, a dark old carp that must have been in the lake for years. The following session I adopted the same baiting approaching and bagged myself a little stockie common.

A nice mid-twenty from the spot

I give the lake a miss for the next six weeks due to spawning and there being a two-day music festival on the park. However, come the back end of August, I was back again pushing my laden-down barrow around to my favoured swim. I had 48 hours ahead of me to try and get the fish back on to my spot, which I initially thought would be a challenge, as I had missed a few weeks’ fishing and no bait had been going in. I needn’t have worried, though, as I managed a couple of fish that trip, another lovely old dark mirror and a stockie common.

During September I was getting down to the lake every week. With the weed being really bad, I had to upgrade my mainline to braid due to getting cut offs and fish burying themselves in the green stuff. I was also introducing lots of bait while I was fishing, mainly boilies in a mixture of sizes, chopped-up baits, as well as the usual particle mix. I had a change of rig as well due to losing a lot of fish on the bounce. I had to go with a multi rig and an S7 pop-up on one rod and S7 barrel wafters on fluoro D-rig on the other two rods. I managed to catch a lot of fish throughout September and thought I had to be close getting one of the real big girls.

As we go into October I managed to lose a couple more fish due to the heavy weed. I persevered with my plan and I hoped that sooner or later my luck would change. I ended up catching another couple of smaller fish, the biggest being a 16lb common, but still nothing of any size.

I got back down again a week later in my usual peg to fish the normal spots. At first light the following morning, one of my rods ripped off, so I quickly so jumped into my chesties and picked the rod up. Immediately I knew this wasn’t another of the smaller fish, as there was no crazy shaking of the head and instead it felt like a heavy plodding motion. After a relatively short fight, I slipped fish over the net cord, but didn’t realise at this time exactly what I’d caught. However, as it came to lifting her out of the water, I realised I had something a bit special, as not only had I caught one of the park lake’s big girls at 34lb 8oz, it was also a new personal best for me, so I was absolutely delighted.

The rewards of all my labours: a 34lb 8oz personal best

I couldn’t get back the following week, but still managed to walk around the lake and speak to a couple of the regulars, who said it wasn’t fishing very well again. The week after, though, I managed to get back out for 48 hours and was rewarded with two more fish, 20lb-plus commons and a mirror of just over 29lb, ending my year on the park lake in fine style.

The 2018 campaign can’t come soon enough for me. I know there’s more big fish in there I’d love to catch, including a 30lb-plus mirror that hasn’t been out in a while, and a 35lb common that hasn’t been caught for two and a half years! Hopefully my spot will come good once again.