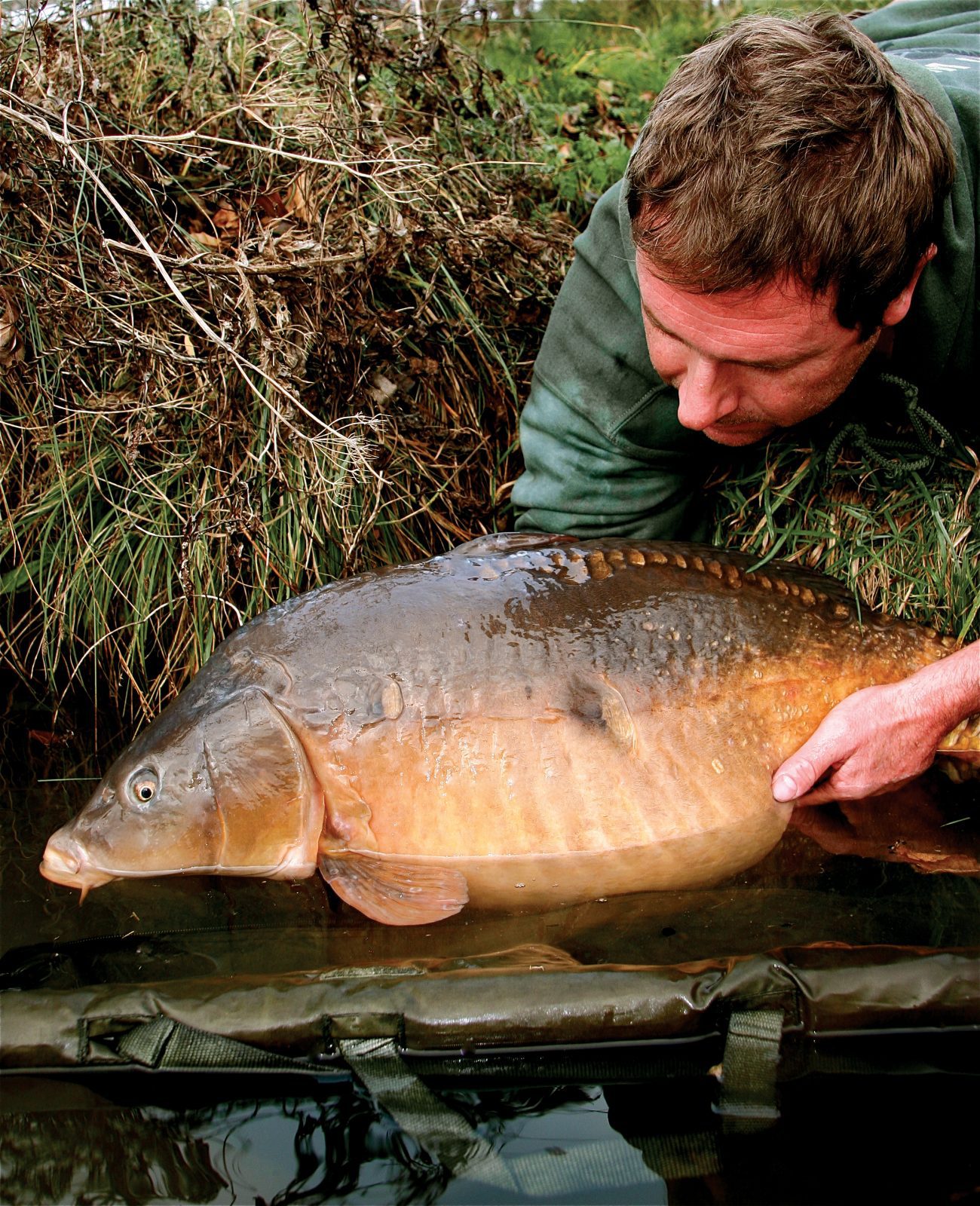 One Bite At A Time

One of the things people wrongly presume when they discover you own a bait company is that you over bait every time you go fishing, just because you can.  Well, aside from the fact it would, in my opinion, be highly insulting to Joe Public, we northerners are so tight it would never cross our minds anyway! Personally, the reason I don’t do it is simply because this isn’t my style of fishing. I rarely get the chance to put campaigns in anywhere nowadays, especially in winter, so heavily baiting on the type of short sessions I do is never going to work. I make do with what I’ve got, grab a few dribs and drabs out of the freezer and always try to nick one bite at a time. So, I’m not here to try and flog you a shedload of bait, but simply to try and help you get the best out of small amounts of bait, especially through the colder months.

One of the main weapons in my armoury is obviously the DNA range of fluoro products. I have seen in the past and, to be honest I was guilty of it myself a long time ago when I was in my ‘food baits only/head stuck up my a**e’ phase, quite a lot of snobbery amongst anglers regarding fluoros. Thankfully, this ignorant opinion has more or less died out now. Let’s face it, if you’re unwilling to learn as a carp angler, you may as well hang the rods up now or be forever behind in the race. Fluoros work – get over it!

That said, being a bait head, rather than just fishing them as singles as some do, I always try to incorporate some kind of conventional food signal into my baiting scenario if using them. I feel this helps to encourage a prolonged window of interest from the carp, in turn giving me more time and maybe more chances to get the bite. This may mean fishing over a small scattering of boilies, a small quantity of pellets or stick mix or a mixture of all three, plus extras like maggots, hemp, etc. Whichever method I use, a liquid additive such as Liquid Yeast Extract will figure highly in the mixture. You just can’t ignore the effectiveness of soluble amino-based liquids during winter, which is why, for me, they are always a must have.

Amino-based liquids are essential additions to the mix

During winter, the way I chose which particular baiting scenario to use is a very simple one really. During low air pressure (1010 and under), I will give them a bit of conventional bait, and during high pressure (1011 and above), I will bait, but only with a small amount of tiny-sized food items and will probably have a zig on one rod at least. There are all sorts of reasons for this opinion, but as we’re trying to keep it simple here, I will leave those for another time. Needless to say, the predominant weather fronts during winter are high-pressure ones, so the latter tactic is usually the one that sees the most use during my outings. The trip for this feature coincided with a particularly high-pressure (1030mb+) cold snap, where the night-time temperature dropped to -4, so it is the latter set of tactics I will explain in further detail rather than the former.

Work was manic as usual that day, meaning we got to the lake after dark and the rods ended up getting slung anywhere, to be honest. The following morning, we woke up to a frozen lake and, with the daytime temperature barely reaching above 3 degrees, it looked pretty grim. The forecast predicted it to be a bit better for the day after, though, so we hung around. It was just on dark before the temperature rose high enough to melt the ice and we managed to get the rods out properly. Whilst whiling away the hours during the day, I’d had a mooch down to one of the lake’s corners that at the time was still iced-up. In the middle of the bay there was some kind of pattern in the ice that looked out of place. As I looked at it for longer, it dawned on me that the night previously, the forming ice had been disturbed by something underneath, leaving a swirly pattern. The more I looked at it, the more convinced I was the pattern had actually been caused by a rolling carp and not the underground spring or a duck I’d first thought was responsible. It didn’t take too long to decide one of the rods was going on this spot when the ice thawed, I can tell you! The other rods were placed strategically round the snaggy island where I was convinced the carp were held up in the cold weather.

Tightly baited spots are easy with a baiting spoon

The rod on the ‘ice pattern’ spot was baited with a Wraysberry pop-up on a choddy hook with a scattering of crumbed boilies round it. The closest island rod was able to be ‘spooned out’ tight under the bushes. I’ve found this method of exact baiting to be fantastic during the colder months. When using a small particle-type baiting scenario, I like to keep the baited area very tight for reasons I’ll explain later. This does means you do need to pay attention to what rig you use in this situation, though, as they are not all effective.

The best rigs I’ve found for these tight kinds of baited spots all centre on having some inherent stiffness built within the rig. I’m sure we all have favourites, and one of mine is the multi rig, a damn fine rig for this situation! The way I fish it is to use a big hook but with a tiny 10mm pop-up. This means the hook is just counterbalanced, not right off the deck as it would be with a larger pop-up. The point should just sit slightly off the deck, poised to take hold. On tightly baited areas, it stands to reason the carp doesn’t have to move far to get its fill.

A multi rig baited with a 10mm Wraysberry pop-up

The main reason I bait so tightly in the winter is so the carp will be more inclined to feed for longer if it doesn’t have to expend any energy doing so. This is where a stiff rig comes in, as if there is less flexibility available in the hooklink material, the quicker the hook will prick the fish while it slowly moves around the area. Of course, a very short braided hooklink and heavy lead will do exactly the same thing, but its horses for courses; use whichever you have most confidence in.

One other thing I should maybe point out terminal-tackle wise is that in winter I tend to switch over to a running lead set-up, rather than the conventional lead-clip systems available. I do this for the same reason I use a stiffer rig material: to make sure I get as early an indication from the sluggish carp as possible.

On this occasion I baited my multi rig with a 10mm Wraysberry pop-up, a bait with a superb winter track record. Within the freebie mix, I used crushed S7 boilies, Crayfish Mini Mix pellets, hemp and, of course, a few of the aforementioned wrigglers. The whole mixture was liberally doused in Yeast Extract and left to soak it up before going out.

During the night I experienced liner after liner on the island rods and it was clear the fish weren’t far away from where I thought they may be. I just needed one to drop on to one of my baited patches, but awoke at first light scratching my head as to why it hadn’t yet happened. Just as I was sat on the edge of the bedchair pulling my boots, the ice-pattern rod was away at a rate of knots. It turned out to be a very welcome low-twenty mirror and certainly eased the pressure a little. Thankfully, a little old-school watercraft had pulled me out of what looked at that time like a blank.

The result of a bit of good-old watercraft

Not long after putting that one back, the spooned-out rod on the island pulled right round as a heavy fish kited away from the snags on the tight, locked-up line. It was a pretty uneventful fight that followed, to be honest, so I will refrain from waxing lyrical about it. What it lacked in the fighting department, though, it certainly made up for in looks, as it was a stunning Italian-looking gutty mirror that pulled the scales round to 36lb 8oz. I was over the moon at such a fish, even more so with it being during a winter feature! As can happen at this time of year, it didn’t stop there, and the same rod was away again shortly after the re-spoon. Again, this was a plucky low twenty that gave a great account of itself given the cool-water conditions. That is where it all stopped, I’m afraid, as is usually the case during the short winter feeding spells. A few more pics were rattled off for the feature and it was time to hit the road – job done!

So, if you’re out there doing it in the winter, first of all fair play to you, as the hardest bit is actually getting out there! Grab yourself a couple of pots of decent fluoros and a few bits and pieces, keep it tight, keep the baiting minimal and you may find yourself grinning back at the camera whilst everyone else is sitting indoors moaning about the weather on the Internet. Thanks for reading and tight lines.