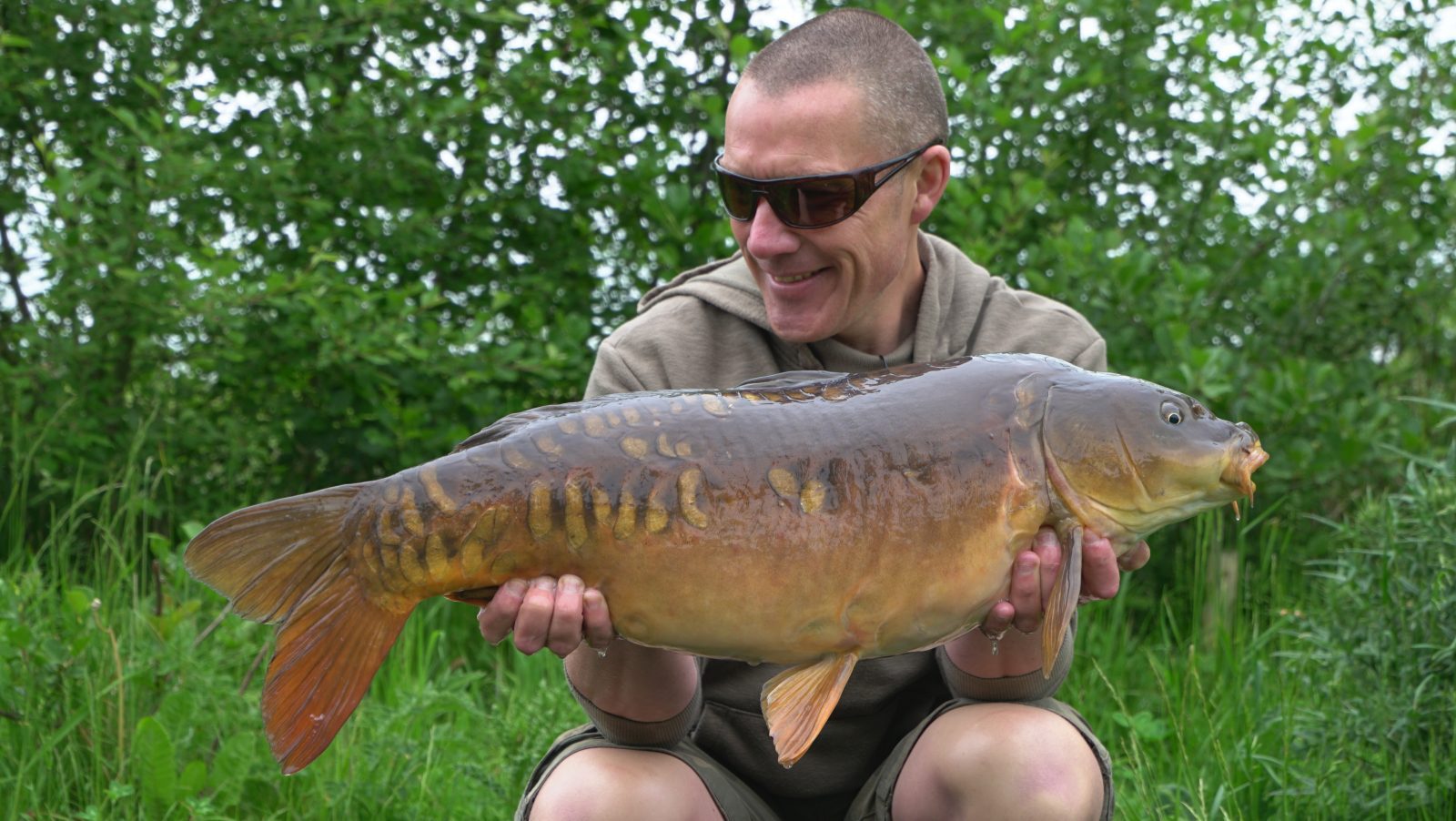 I’m experiencing mixed emotions about this month’s filming, but as I sit here, only a day after returning from Yorkshire and the more I think about it, the more I’m super pleased with how we did in the end.

There’s no doubt the weather threw a big curve ball at us. On first day it was 25 degrees bit with a northerly wind blow, which hampered our chances of surface fishing a lot. We did have a few opportunities in the slack water, but even then, the Betastim Floaters glazed in Tuna Oil just sailed through the swim way too quickly. We were told late evening and early morning were best for surface fishing, as the light levels are lower and the fish don’t see as much glare on the top when feeding. Again, the wind hampered this massively. I did lose a fish from peg five on the Monday evening and bagged one at 5am on the Tuesday morning from the same swim, but then the wind came and killed that area.

I plotted up in peg seven for the first night and took some advice from Jase on a ‘banker’ spot in a tight channel between the weed and reeds. This rod was fish with a Wraysberry wafter and a small mesh bag of Crayfish Mini Mix, designed to prevent tangling and create a bit of adding attraction around the hookbait. It was this rod that tore off while I was still floater fishing. I managed to coax it out of the far-margin weed, only for it to do me in the marginal stuff. Seriously, I got it out of two big beds only for the fish to win the battle on the third, with the main line parting, despite me trying every trick in the book to free it.

Things were looking grim at this stage, if I’m honest; the wind was still killing us, so there was zero chance of surface fishing. I then saw a couple of fish crash in peg four, so another move was in order. Three rods were put out on the bottom in and around the funnel of weed around 60 yards out. Now I felt revived, but other than a few liners, the swim seemed to just go dead and morale was low. It was way cloudier, but if the wind had died off it would have been perfect for the Betastim Floaters to do their thing, but it was relentless. I then said to Mozza that I was moving down into peg one, a swim that apparently gets neglected (lord knows why), as the strong northerly was battering the reeds and I felt sure there would be some fish on the end of it. It was a pure hunch, call it a carp angler’s sixth sense, but rather than fish over to the far bank, which seems to be the going tactic, I simply under-armed flicked the rods close in at the bottom of the marginal shelf. Now I felt like I was angling on my own terms and doing it my own way.

I continually watched fish only a couple of feet down moving through the swim after coming through the concrete pipes between pegs thirteen and one – a bite was definitely on the cards! After making no disturbance and lowering the small bags of Crayfish Mini Mix down with a resounding thud, it took just 15 minutes of waiting before the tip of the left-hand rod curled round and we were in business. The fish fought relentlessly, which wasn’t what I wanted, but all too soon the game was over and we bundled a cracking upper-double mirror in the net. In fairness, we needed that fish to give us a boost, and what a fish it was too.

The next few hours were basically spent looking in every nook and cranny around the lake looking for opportunities in the edge amongst the weed. It does seem to be the sort of lake where most anglers fish to one bank, but I even said to Jase when he walked me around that surely you could catch them under your feet. Jase never had, but Jase only fishes it during the matches, when there’s way more commotion around each swim, much more line pressure and no chance of moving swims like we did.

We were now at decision time. We were still in peg one, but for no other reason than it had done a few bites over the past 48 hours, peg 13 was now an option. However, it felt like I was only going to move in their as it had done fish, which isn’t really my style, if I’m being honest. Just as we made the call to stay in peg one, the middle tip banged down and we were away again with what turned out to be a pristine dark common. Again, we needed that fish to tell it was the right call to stay in peg one.

It was my sort of fishing: super slack lines, rods right back from the edge and fishing 10 yards out, almost ambushing the carp as they travelled through. I wanted to try and stop more than one fish at a time, so it was time to give them a bit of grub and time for the 8mm Switch I’d brought with me. I mean, how often do you get the chance to fish all three rods at throwing distance of 8-millers? It was heaven! I didn’t go mad with the bait, probably about a kilo scattered along the line of all three rods. I was even getting liners through the night, but no bites; that was until another couple of fish in quick succession upped our tally to five fish and a couple lost.

Two bites in quick succession upped our tally to five

To summarise, firstly, the fish in the Q Lake are nothing short of amazing; each fish we caught was in mint condition and all from different strains, which is credit to a well-run fishery.

Would I have done anything differently? Absolutely not! We followed venue experts’ advice and it didn’t really work for us, so we made it happen our own way. On another day we could have sat in one swim and the bites would have kept on the coming, and the wind would have been low so we could have thumped them on the surface, but alas, that wasn’t the case. This is the same situation on the Q Lake week in, week out, so a perfect task for Mozza and I to overcome.

The biggest carp of the trip and another stunner

A couple of things that did strike me was the difference the 6mm Betastim pellets made when the fish were shying off the 11-millers; it was very noticeable and got them competing at times. The final one was how effective the 8mm Switch boilies were and how the fish would accept them. Maybe it was the fact they go in with such minimal disturbance, or the subtle colour, but again, perfect for peppering a marginal situation that we came across. Jase did tell us Q Lake certainly isn’t a venue you can smash ten bites out in 48 hours; four or five bites and you’re doing very well, he said, so I was more than happy with seven bites during what at times was a frustrating session. We certainly had to work hard for them, but we got the reward in the end.

See you next month!