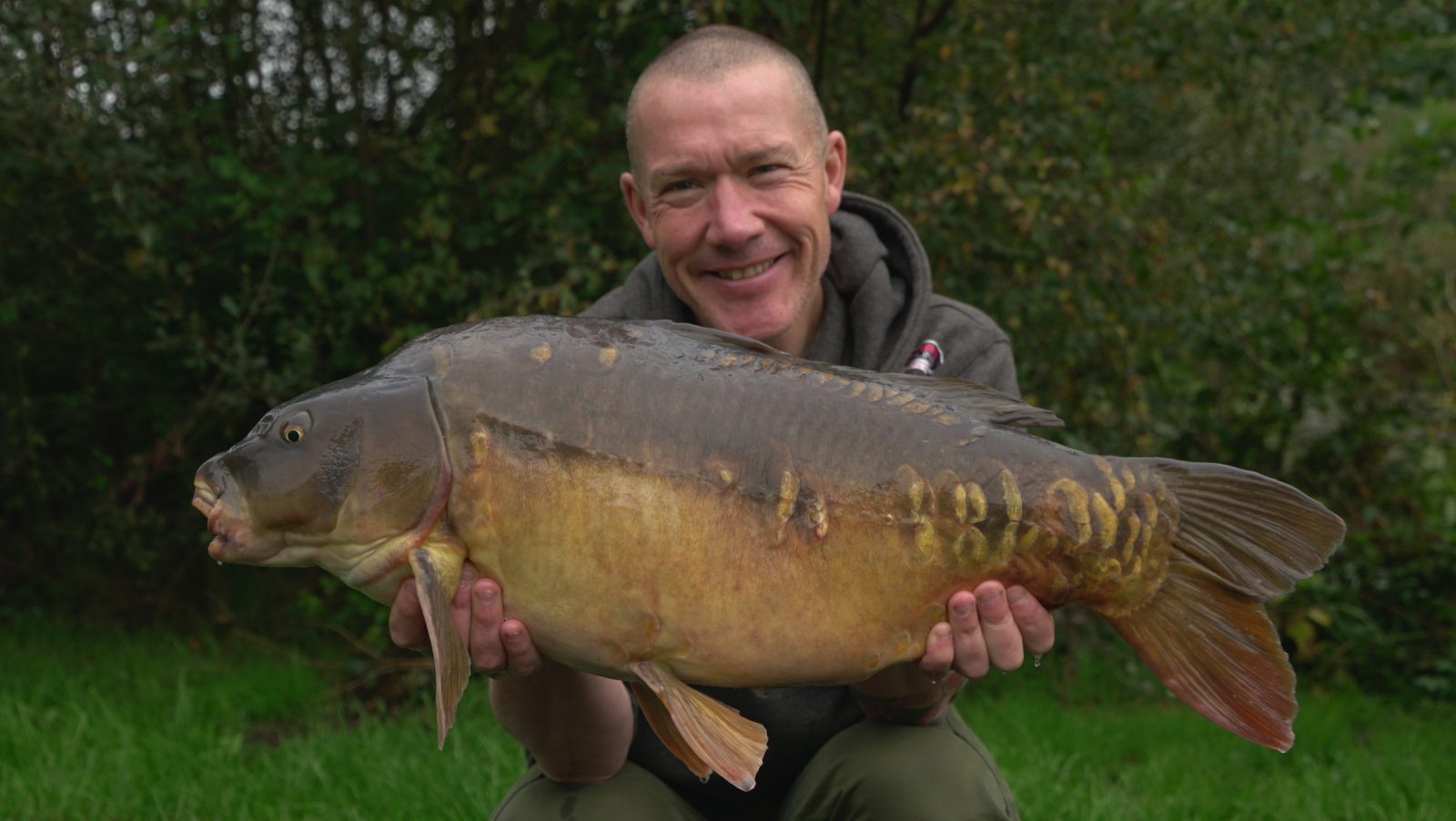 Well, we knew this was going to be our toughest challenge yet, and that’s how it turned out. Despite its lovely setting and amazing stock of carp, the Specimen Lake at White Springs is no pushover at the best of times, but we’d listened to local advice from our good mate, John Flewin, and he said it was dominated by nut-based baits, which was music to my ears, as it gave me the chance to use the only bait in the DNA range that I hadn’t so far, the NuttaS. 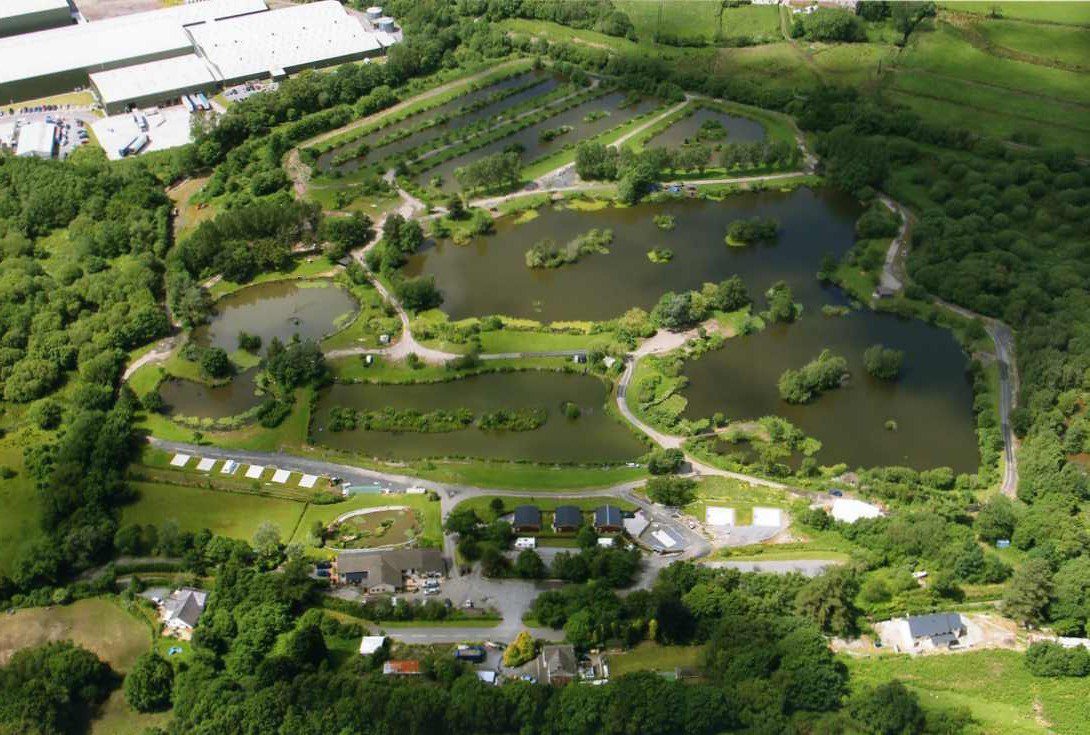 White Springs is also massively dominated by bait boats to aid in being stealthy and to drop rigs tight around the islands. This meant small amounts of bait was the order of the day – almost ambushing tactics, really – so I chucked a load of NuttaS through the chopper and loaded the boat up with lots of NuttaS Liquid Food to pump as many food signals into the water as possible, along with only a handful of 15mm and 18mm boilies for the main meal. 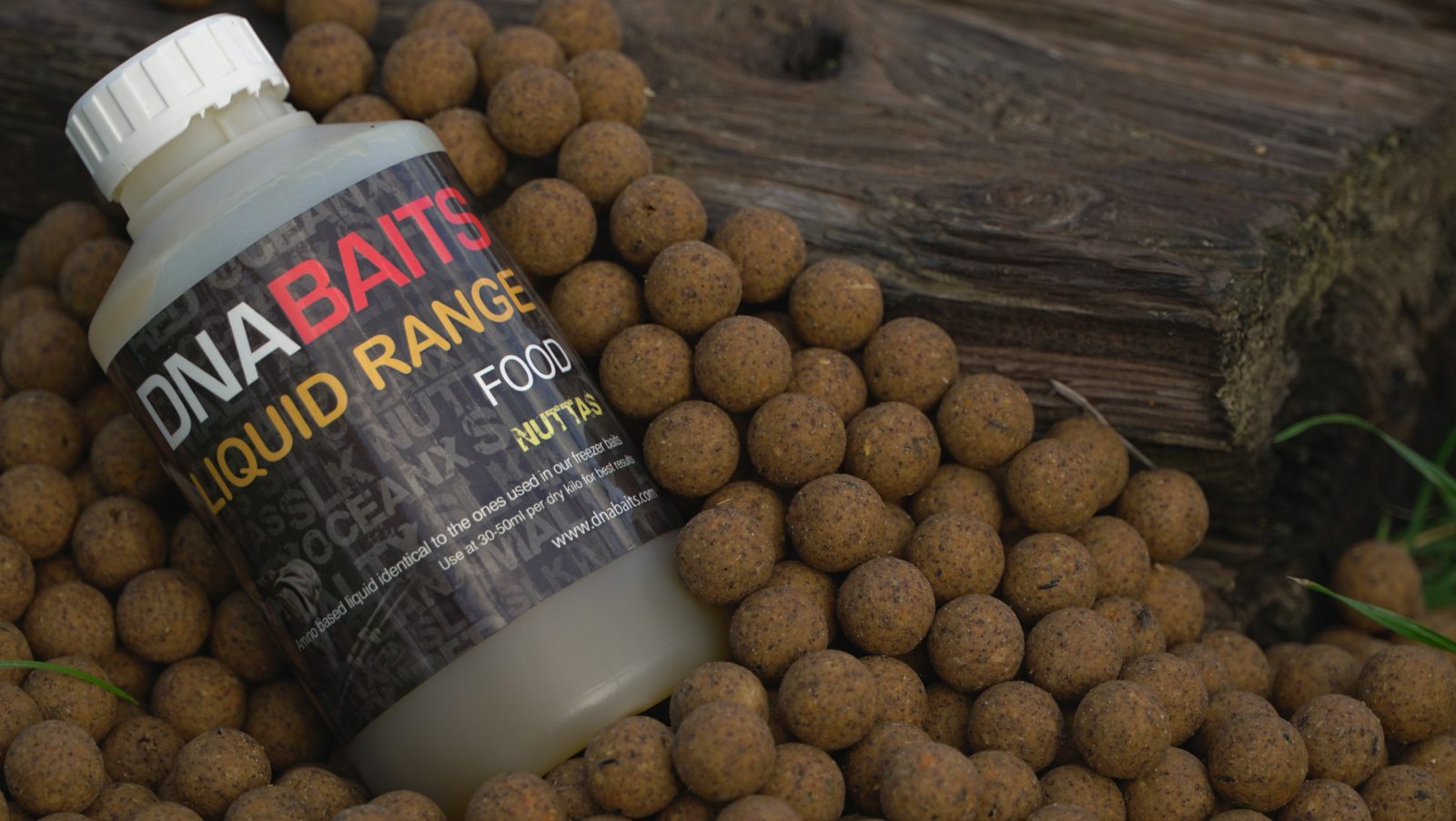 I was feeding with NuttaS boilies coated in matching Liquid Food

The conditions were perfect for White Springs: warm, rainy and windy. We’d got a couple of swims that gave us loads of options – too many options, really – but after John showed us a few likely looking areas, we were up and running. On other OAS shoots, we listened to local knowledge, and this was going to be no different, but I’ll be honest, I was nervous from the start, whether it was because I knew we could easily blank, or the fact there were a couple of forties and a load of thirties swimming in front of me. Mozza said I was being silly; he’d just come back from a mega session at Rainbow and I could feel his confidence about catching.

We also had the luxury of one of the cabins down at the lake; it was pure luxury really and helped us no end with the relentless rain and wind, and as the rain eased on the first evening, a few fish started to show their location, only for an angler to chuck a lead right on top of them and that was that; we never saw another bloody thing!

We turned in early, and with only a few liners to show for our efforts, we were still fishless come first light. A few bubblers were noted not too far from my middle rod, then all hell broke loose as the tip buckled over. I was away, then in a flash I wasn’t – the bloody hook had come out! I was devastated; really, really devastated. Obviously, Doris had the camera pointing right in my face, but I couldn’t even bring myself to swear at him. I didn’t say a word. Bad, bad times. I knew that might have been my only chance and I’d blown it.

The boat was loaded back up and sent out to the base of the island shelf. For ease and quietness, bait boats can’t be beaten, but on waters like White Springs, where 99% of anglers use them, I really don’t think they’re an edge any more. I’d noted that bite was on a bright yellow PB pop-up on a QC rig. John had said yellows and creamy-coloured wafters had been getting the bites, so again, that’s what we went in with. The left-hand rod fished super tight to my left island was on a PB wafter. This island was very undercut, which meant I was literally driving the boat up to it then dropping the lot. The echo was still reading 3ft, so you can imagine the fish hiding under the cut-back and just coming out for a munch every now and then. This is exactly what happened an hour later – we got another bite! All was going okay (apart from me crapping myself), until the fish went mental under the rod tip and ploughed through my other two lines. Even opening the bail arms did nothing, as the fluorocarbon had sunk so far down the fish was still wrapped around it. There was only one option, and that was for Mozza to help (which he never does). You’ll have all seen how he won’t even pass me a landing net, or a pair of scissors, but this time it was serious, as we knew the severity of the task in hand. Eventually, after much carnage, we bundled our first Welsh carp into the waiting net. YES!!! We were over the moon, as it was definitely a team effort. I hate saying nice things about him, but I wouldn’t have landed it without his help, the div! 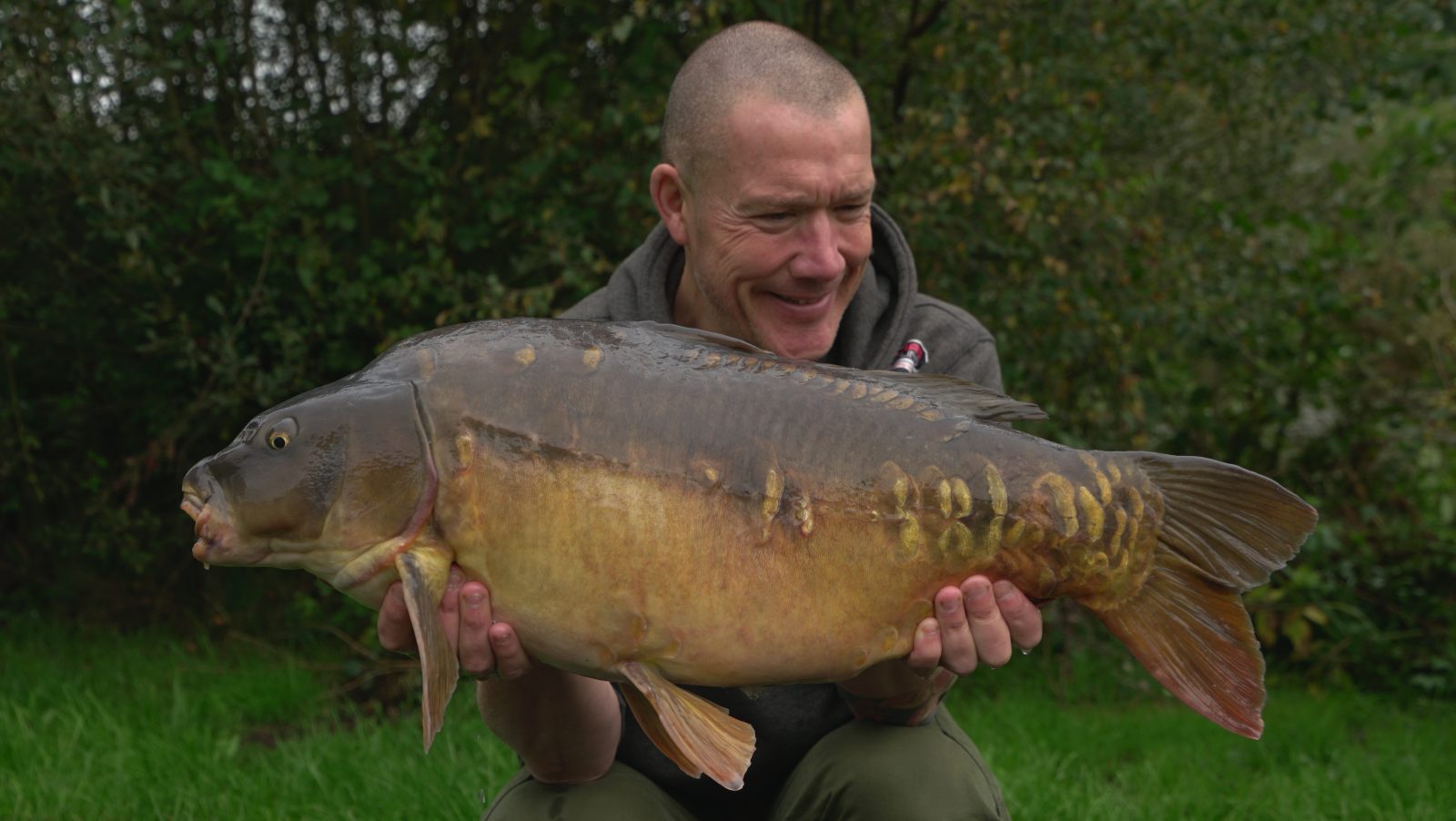 On the scales it went 22lb 12oz, not a monster by White Springs standards, but a fish is well earned from here, let me tell you. Despite it looking very good for a bite for the rest of the day conditions-wise, nothing materialised at all; it just didn’t feel right again. I’d noticed that with the lake being littered with small islands, it felt like everyone was cutting everyone off. Now, don’t get me wrong, everyone was sticking to their water, but I felt very hemmed in where I was. I like to visualise how the fish might travel to get to my spots, and I’ll be honest, I just couldn’t work that out at White Springs. It was like they’d got to negotiate 35 islands and 15 lines to get anywhere near my zones (a bit like Mozza at Rainbow) and I didn’t like it. I had got rod only close in on some softer open-water silt – it felt right to just scatter a few kilos of the NuttaS and fish all three rods out there – but it was the two island rods that did me the bites, so I couldn’t very well give up on them.

Eventually, after watching the lake all day, I decided to put one down to my left, almost tucked behind me where the wind was battering, as again I was getting a sixth sense to do something different to everybody else. The night came in and so did heavy rain and very strong winds. I was thankful I was in a cabin, if I’m honest, and after turning the sensitivity down on the alarms, I thought it had gone deathly quiet, only to wake up to discover the pod had been blown over! Luckily, I hadn’t had a bite, nor did it look like I was going to get one, despite the brilliant conditions.

We packed up around 10am, but we weren’t too downbeat. We’d had two bites from a tricky, pressured water, which was was a result in itself, but I did feel like I was just going into a swim and fishing it the same way everyone else does, and that’s not really my style, but when in Rome, eh?

The bait worked immediately (like I knew it would). The bright PB pop-ups and wafters got both the bites, while the match-the-hatch NuttaS wafter didn’t produce. I 100% put that down to the open-water spot I was fishing, and the fact the fish didn’t seem anywhere near it at any time during our stay. The fish are so glued to them islands a lot of the time, as that’s where the majority of the bait is placed from the boats, and at the end of the day, if the islands are under cut so much, the fish have loads of safe areas to hide, I guess. 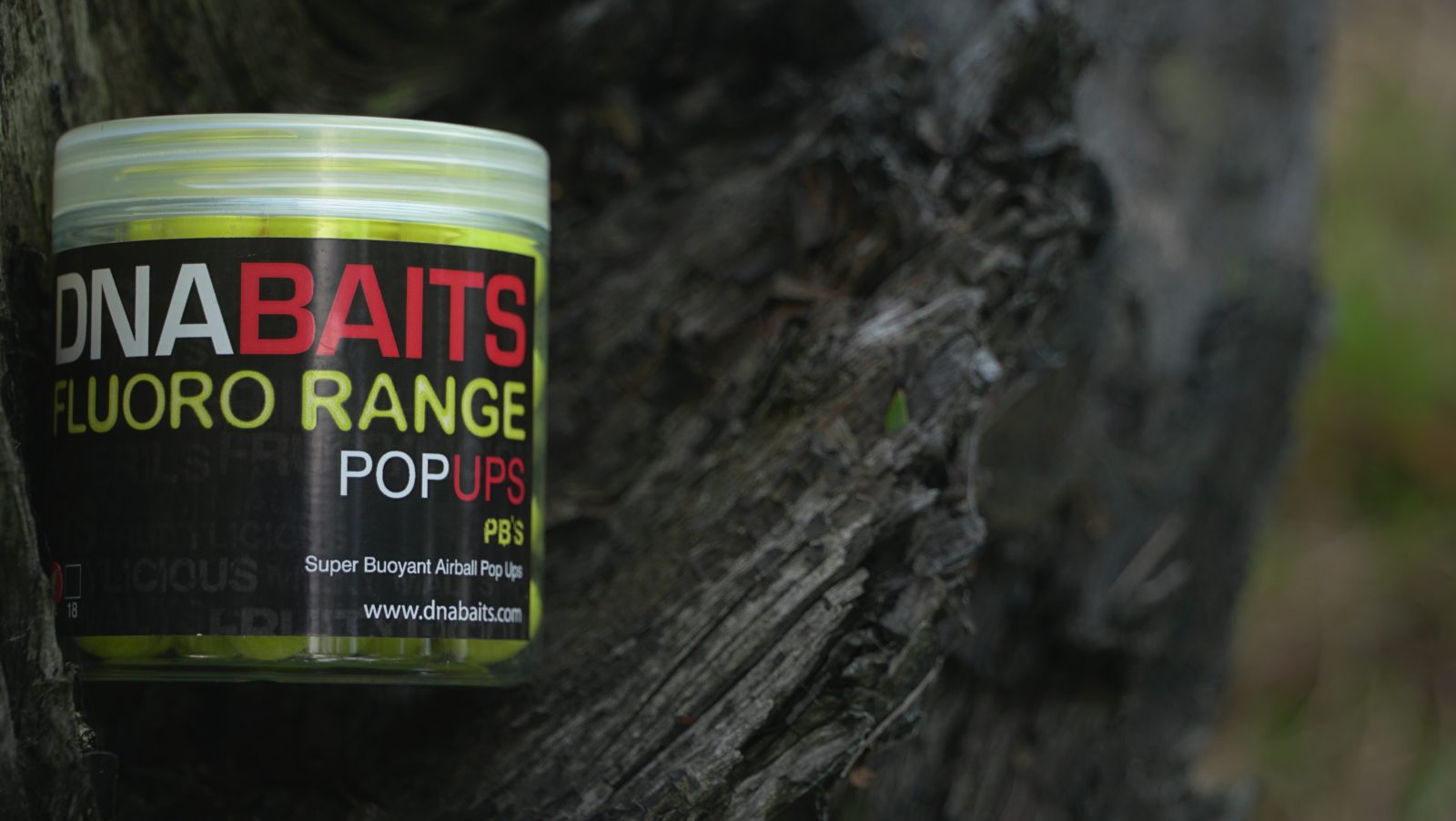 Taking all of that into consideration, though, we met a lot of lovely people, like we always do on our travels doing the OAS shoots. We are getting so much love that it’s truly humbling, so thank you for that. The setting at White Springs really is something to behold; the rolling Welsh hills are right in front of you and a finer view is hard to come by.