Tony Payne experienced the most remarkable morning’s action on his first trip of the new season on Northey Park, setting a new UK personal best as part of three bites in the space of an hour!

The first bite came from the new PB, a 41lb 7oz mirror known as Cannon, a fish considered by the members of the Cambridgeshire syndicate as the queen of the lake.

“I couldn’t have asked for more, what with it being my first trip back to the lake of the new season,” said Tony.

“After watching fish milling around in the weed, the action started the next morning when they began to feed like mad. Each fish was on 18mm Secret 7 Hard Hookers over five Spombs of 18mm and 22m Secret 7 boilies.” 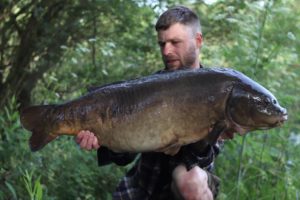