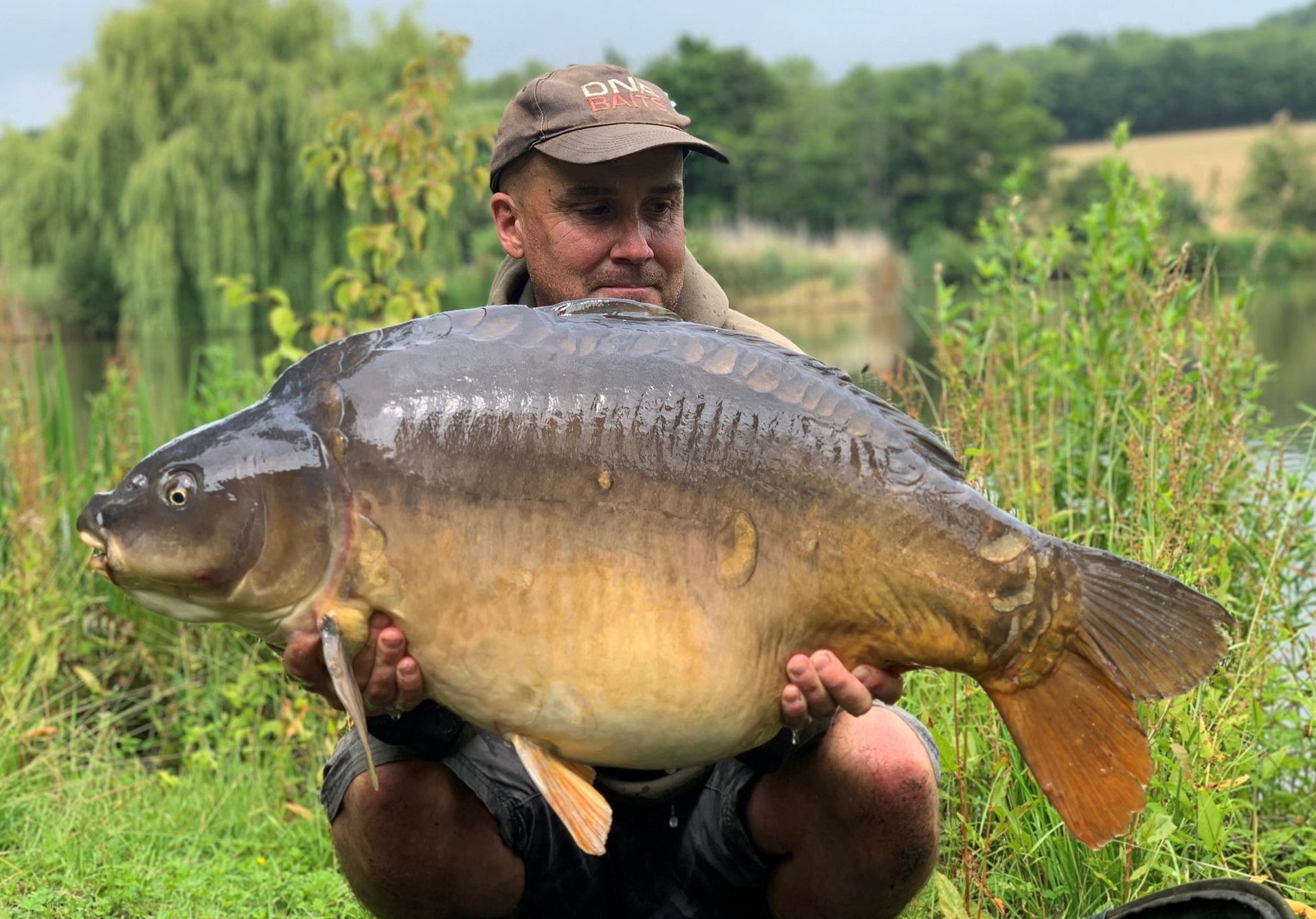 PERRY’S BRACE OF FORTIES ON RETURN TO ELPHICKS

Perry Alabaster’s first visit to Elphicks’ North Lake in a couple of years turned into a session to remember, as he rattled off nine fish in total, including two 40-pounders!

Seven of Perry’s fish came during a mad five-hour feeding spell, when they really got their heads down on his mix of Secret 7, Crayfish pellets, hemp, maize and S7 Liquid Food.

“I hadn’t managed to get the rods out for a few weeks before this session thanks to some pretty rubbish luck throughout June,” admitted Perry.

“Amongst other things, my son managed to get himself run over and break his kneecap in half, so a little fishing session would come as a very welcome change to all the recent hospital trips!

“I had been invited to fish a 60-hour stint on Elphicks North lake on someone’s lake-exclusive booking, a venue I hadn’t visited for a couple of years and it couldn’t have been timed better.

“With all spawning activity a distant memory on the North Lake, I came out a measly seventh in the dreaded swim draw, so I chose a deep-end swim where I hoped the majority of fish would be holding up. After 24 quiet hours, it was clear the fish were happier feeding in slightly shallower water, so when my mate Billy Wells vacated a swim towards the shallows, I quickly moved my gear further up the bank. Bill had already caught a few decent fish and I knew he’d been using S7, so I was happy to follow him into his swim and he pointed out one particular spot that had produced a bite or two.

“Within 10 minutes of casting out my S7 hookbait and baiting up with a few Spombs of chops, Crayfish pellets and S7 Liquid Food, the rod was away and I landed a 22lb mirror to get off the mark, closely followed by a grass carp of 21lb on a PB pop-up!

“The second night was as quiet as the first, so on the last day of the session I made a few subtle changes, adding some hemp and corn to the mix and fishing a more critically balanced whittled-down PB pop-up on a long braided hooklink to sit above the thick, soft silt.

“The last full day started slowly, but a chunky 40lb 10oz mirror at midday seemed to trigger a mad spell of feeding activity. Neil, the guy to my left, had already landed a forty and he was consistently catching too, so we were running between our swims all afternoon to help each other with netting and photos, which was very handy.

“My next fish was a mint 32lb 12oz common, closely followed by another grass carp of about 25lb. As I wanted to deal with the common first, I unhooked the grass carp and left it in my second net and placed a heavy bucket on the handle to keep it in place, but that was a schoolboy error! I’d forgotten how nuts grass carp are prone to going once in a landing net and this one flipped itself clear of the mesh and swam away.

“Half an hour later, Neil helped himself to a 34lb mirror just as I was landing a 33lb 8oz common, so we got a quick brace shot and put the rods back on the spots. My next take led to another grass carp but even bigger than the one that got away at 34lb 8oz. They aren’t my favourite species, but this one was by far my biggest-ever UK grass carp and I wasn’t letting this one do an escape act, so I quickly got a photo of it for the album.

“I’d been trying to pack up for about four hours by now, but was more than happy with all these interruptions. However, with only about an hour left before I really needed to get the rods in, knowing I was at risk of being locked into the complex for the night, I had one more screaming run. It felt another good fish, staying deep and feeling heavy as I eased it towards me. I was really hoping it’d be another forty, as I had a little personal milestone on my mind of finally reaching 50 different UK forties. Once in the net, Neil helped me hoist it up on to the weighing tripod and he read the scales for me… 40lb 8oz. Get in! I was buzzing with that one, but when I stopped for a bite to eat on my way home, I looked at some pics on my phone and compared that last fish to some I have in an album and I realised it’s one I’ve had before, so the wait for that milestone goes on. Nevertheless, it had still been a session to remember.” 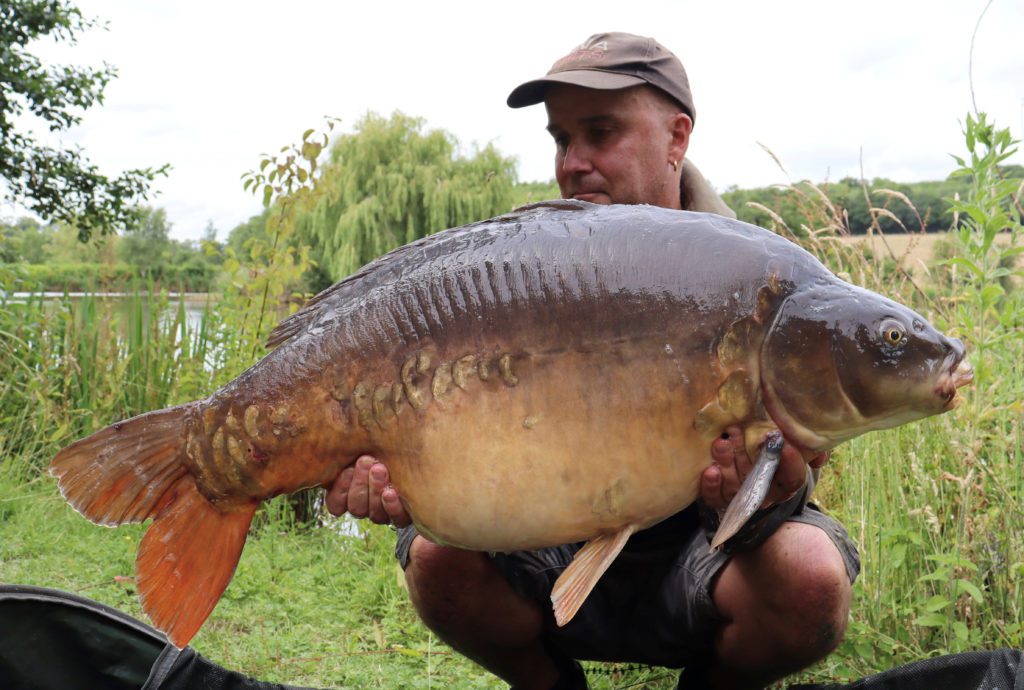 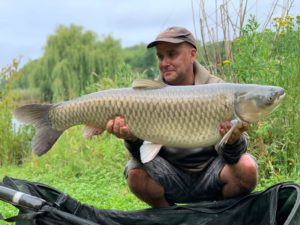 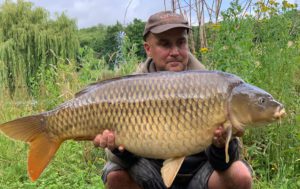 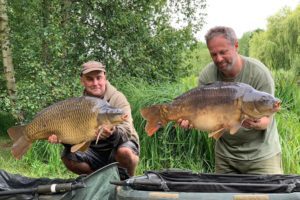