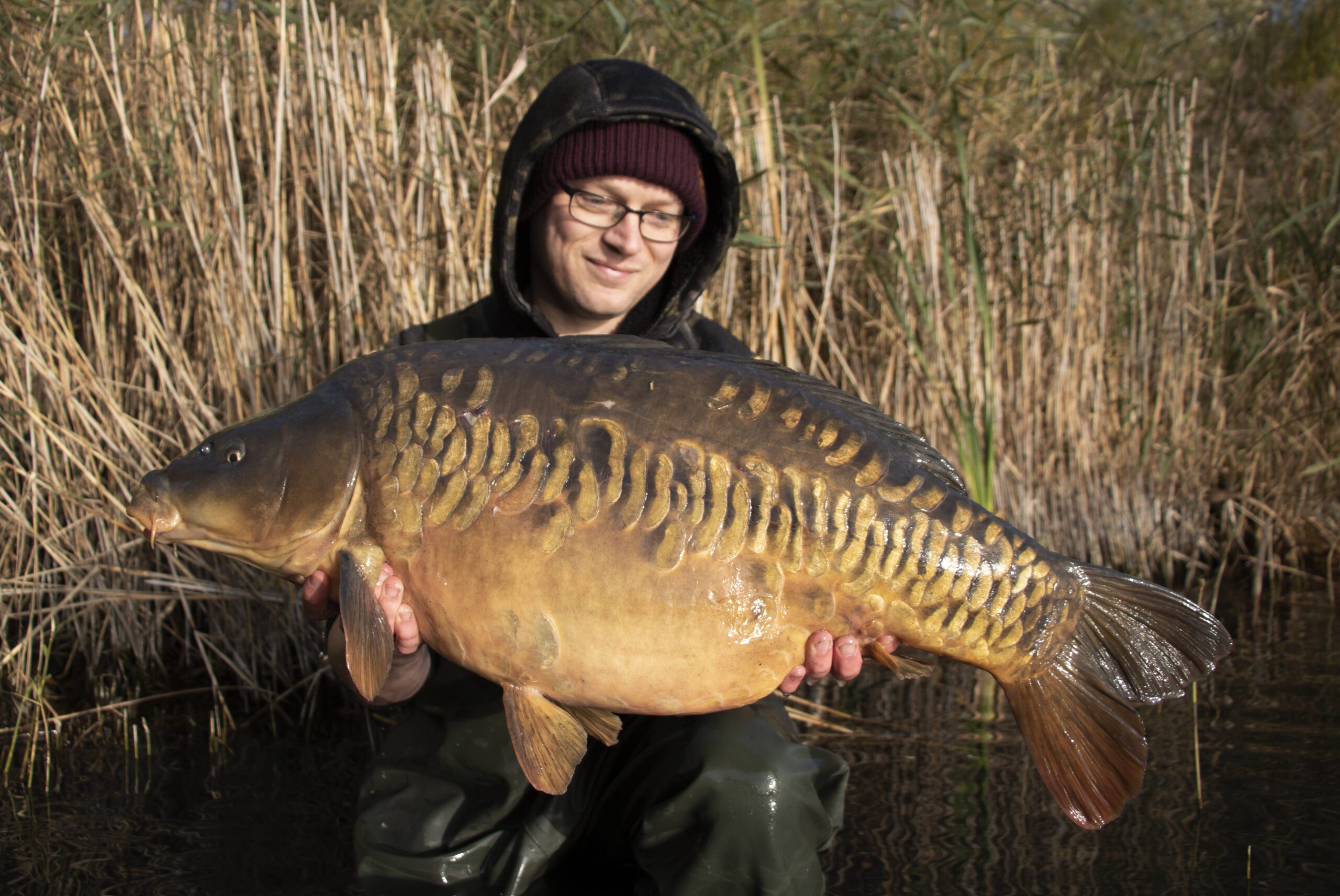 Our media and marketing manager, Paul Monkman, is really reaping the rewards of his hard work this autumn, adding three more fish to his South Ings tally during a 24-hour session over the weekend.

Having started his campaign on the Embryo Angling Habitats syndicate water back in August, Paul has kept the bait going in regularly over the past few months, often prebaiting twice a week, armed with a throwing stick and a bag of Bug boilies.

Upon arrival, Paul got the rods out on his baited area and had his first fish shortly before darkness, a 15lb 14oz common that had grown on in the lake. A fresh top-up of bait was deployed just before darkness set in, with Paul hopeful another bite wouldn’t be too far aware. The night proved uneventful, however, with very little indication on the alarms and hardly any shows out in the lake.

Then just on first light, the same rod that produced the common signalled a screaming take. Standing in the cool margins in bare feet attached to hard-fighting carp soon woke Paul up, and for the next 15 minutes he would be dragged up and down the swim by what was clearly a much larger fish! Blowing on his hands for warmth as the battle ensued, Paul eventually had the fish beat and over the net cord slid another beautiful scaly mirror the venue is synonymous for.

Knowing he had something a bit special in the net, Paul decided to call upon a friend to help with the photos. On the mat, the fish looked every bit as impressive as it did when it slid into the net, immaculately conditioned, beautiful scaling and a perfect mouth. At 28lb 4oz, it was also Paul’s largest fish to date from the venue, eclipsing the capture of the equally stunning ‘Ting Tong’ at 26lb 2oz in August. 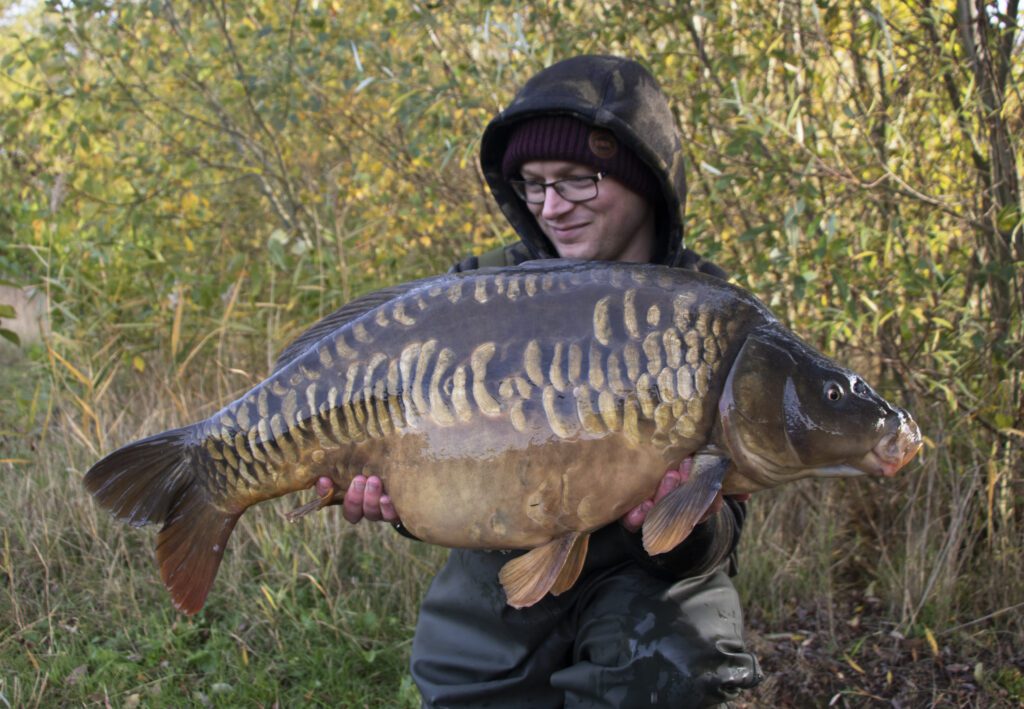 With the fish returned to the water and the session approaching its close, Paul was just contemplating packing up when the same rod was away again! Another spirited fight ensued in the bright morning sunshine, before yet another scaly mirror succumbed to the net. At 21lb 4oz, it was fish number 22 of Paul’s campaign and his seventh twenty in that time.

This time, all three of Paul’s fish fell to PB wafters amongst his spread of Bug boilies, with a few Spombs of 8mm Bug freebies soaked in Betastim and then covered in Bug Hydro Spod Syrup and Bug Stick Mix introduced over the top of the rigs. 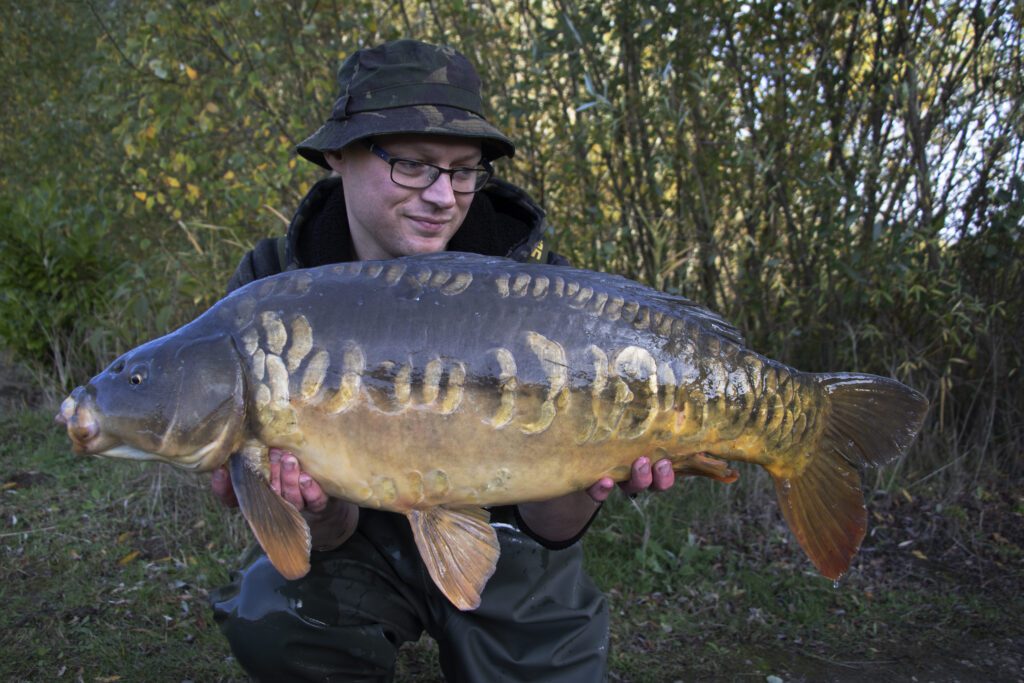