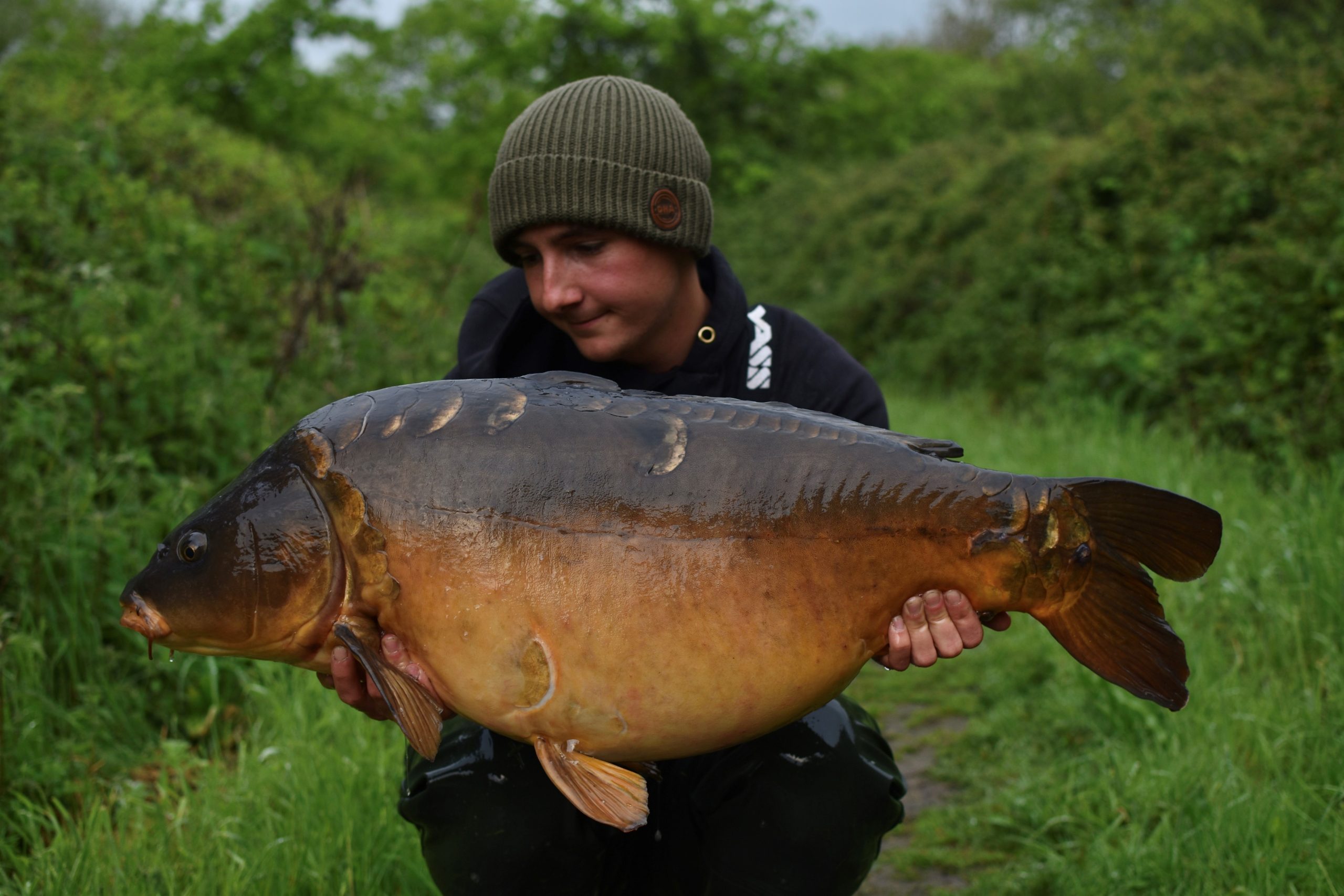 Myles Wasley earned his reward for a spring of hard graft, landing one of his sailing lake’s special mirrors.

After a number of consecutive weekends getting down to the venue and keeping the bait going in on a few different spots, the fish showed up on the Sunday. Knowing he couldn’t miss the opportunity, he decided to stay an extra night and the following morning got his reward with an amazing mirror of 40lb 3oz.

Myles takes up the story of the capture: “I got down to the lake on the Friday after work and got the rods out on three spots I had been concentrating on over the past few weekends, baiting over the top with a few Spombs of 12mm and 15mm SLK boilies, mixed in with some hemp and tigers.

“The next morning I had a take on my long spot, which turned out to be a small common, and I also had a tench on the closer-in spot, but after that it all went quiet.

“I got back down the following Friday and managed to get into the same swim, so flicked the rods back on to the same spots, only this time I put two rods on the long spot, where I caught the common from the weekend before, and just the one rod on the closer spot.

“On the first morning just before first light, I had another take on the long spot, which turned out to be a small mirror. I had seen a few shows in the area, so was confident of another bite, but it just seemed that once I had caught one, they would push back out to the middle.

“I turned up the following week to find someone in the swim, so I had no choice other than a small corner swim down the other end of the lake. I didn’t manage anything that weekend apart from a tench.

“I was back down the week after that and, thankfully, managed to get in the area I had previously been fishing and catching from, so I repeated the process of getting the rods on to the spots. However, I noticed the long spot had a lot of eel grass over it, so I didn’t bother fishing there and decided to fish my closer spots where I’d caught a few tench from previously.

“The first morning was quiet, with odd one showing out long between the buoys, but I decided to stay put, as they were still in the zone. The next morning, I saw several shows not too far away from me, including a couple of big ones, but around 10 o’clock on the Sunday morning the boats turned up, which meant I had to reel in on showing fish, which wasn’t ideal.

“I was meant to be going home that day, but after what I’d seen that morning, I decided to stay and do one more night before work. Once the boats had gone in, I put the rods back on to the spots along with four Spombs over the top of each rod. Then the early hours of the next morning, I had a savage bite on my right-hander, as braid was stripped from the spool on a tight clutch! I knew immediately it was a better fish and was in no mistake when a large mirror slid over the lip of the net.

“I rang a good mate of mine who lives locally to the lake to come down and help with the weighing and take some photos, before I headed off to work a very happy angler indeed!”