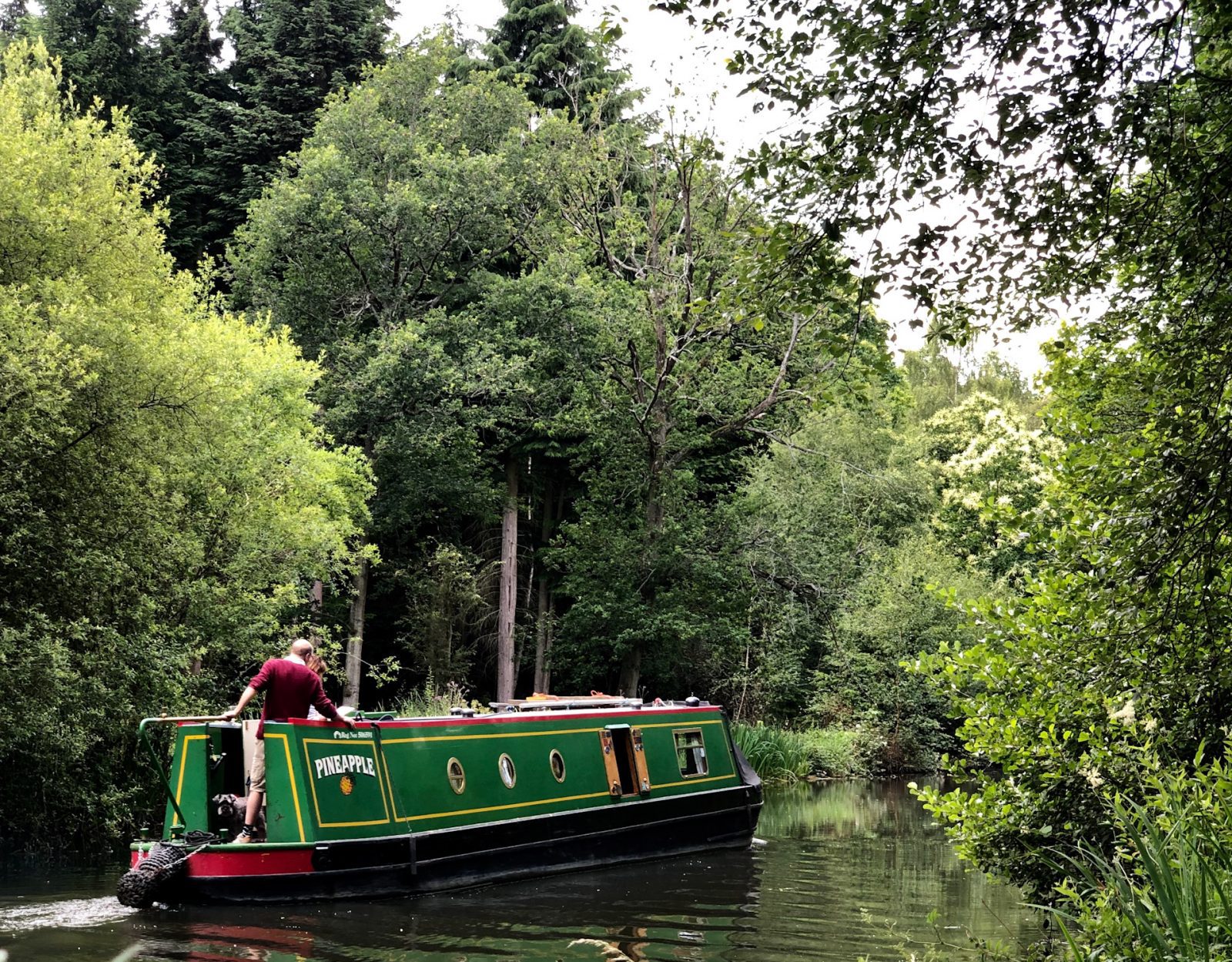 After waking up early doors on the Friday, I left home, went to pick Ollie up and we set off on our way. Obviously, a McDonald’s stop was on the cards to fuel up for what was going to be a very long, hot day!

After arrived on the stretch, we took a walk up to the bridge to take a look at the water. There was a fine mist on the surface and it looked prime! We decided to take a walk down to the water’s edge and see if we could find any feeding fish or any signs of activity – and we weren’t disappointed. A carp patrolling along margin had me buzzing, as I expected it to be a lot harder and take a lot more leg work, but the water was gin clear at this time in the morning, as the boats hadn’t passed through at this point, so we had a massive advantage.

We then continued walking up the stretch to find another carp mooching around, so our confidence levels were high. Then at the next location we found another four carp holding up in some weed. Ollie and I looked at each other and said, “That’s a bite!” We then made a quick move to the van and grabbed a light stalking set-up each. I baited a little clear spot in the edge with some Crayfish Mini Mix, hemp and a little bit of corn for visibility. It wasn’t long after I had lowered my SLK/S7 snowman rig on to the spot before there was a massive vortex in the water and my tip was bent double. It turned to be a savage close-in battle with gnarly old canal warrior, which get me off the mark for the session. 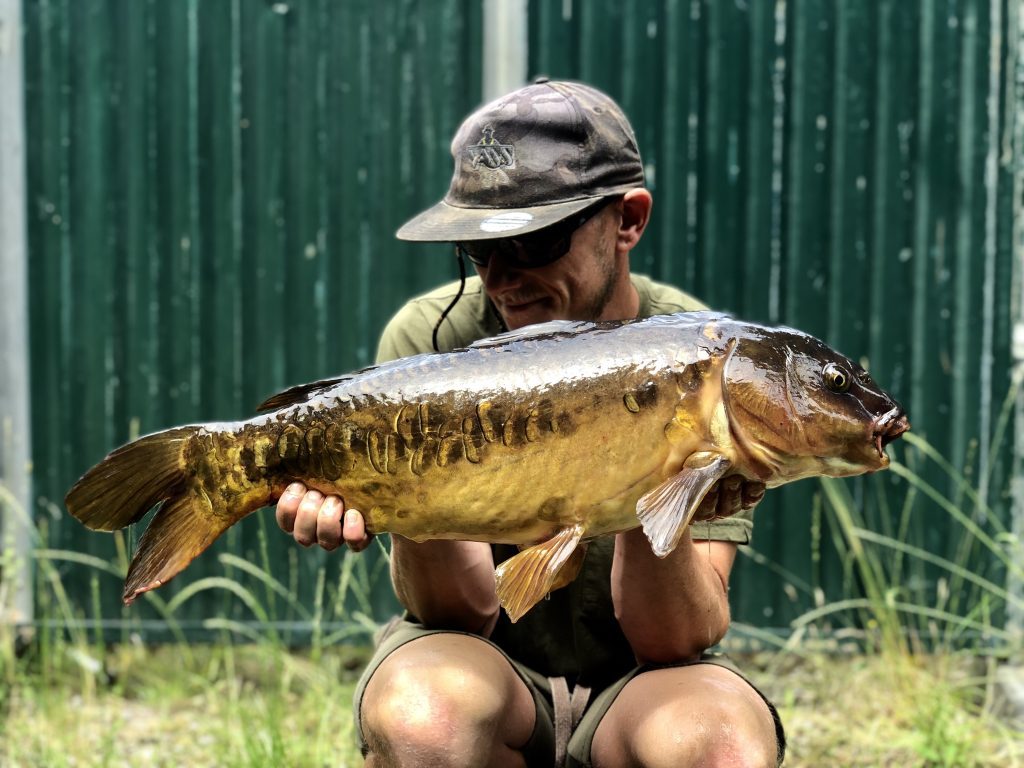 We continued to watch the fish moving through, but that didn’t lead into anything else. As you can imagine, I was super buzzed to have landed one after being there a few hours. It just goes to show an opportunity should never be ignored.

We then continued our mission and walked a lot of miles that day. Ollie’s step count was more than 50,000!

With the night closing in, we decided to set up amongst some snags. We baited the spots, got the rods out and sat watching the water for any signs, but we didn’t see a thing. Ollie suggested moving up to the spot where we had found them previously, so we got our barrows, loaded up and hit the beaten track, only to spend the night catching an abundance of bream, which was extremely disappointing, because we had seen so many carp in that area throughout the day. 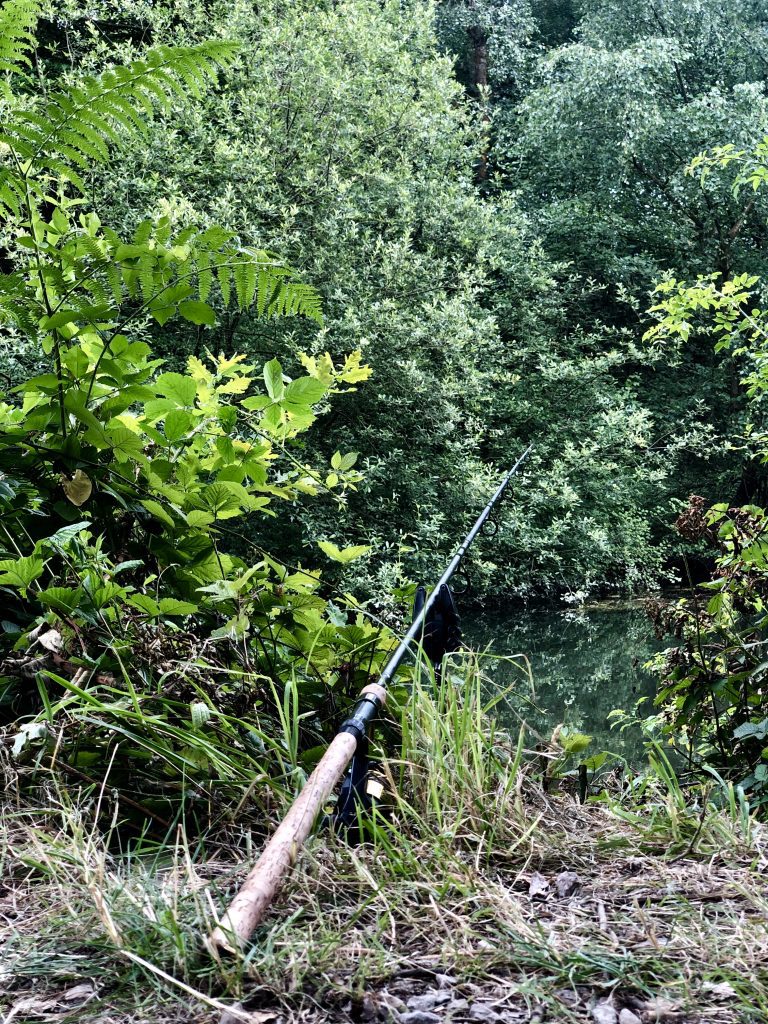 Set up amongst some snags

We packed up early doors and went out walking again, only to see the odd few small carp milling around, so we thought we would get back to the spot we had done the previous night and fish the same area. I got my rods back on the spots I had made the night before and baited heavily with 15mm SLK and 18mm S7 shelfies mixed with SLK Stick Mix and a good helping of hemp and corn.

My rod had been out maybe an hour when it shot off with a real character common on the end, just the sort of fish I had come for. Ollie took the photos and we settled down for the night, only to have it disturbed by a load more bream! 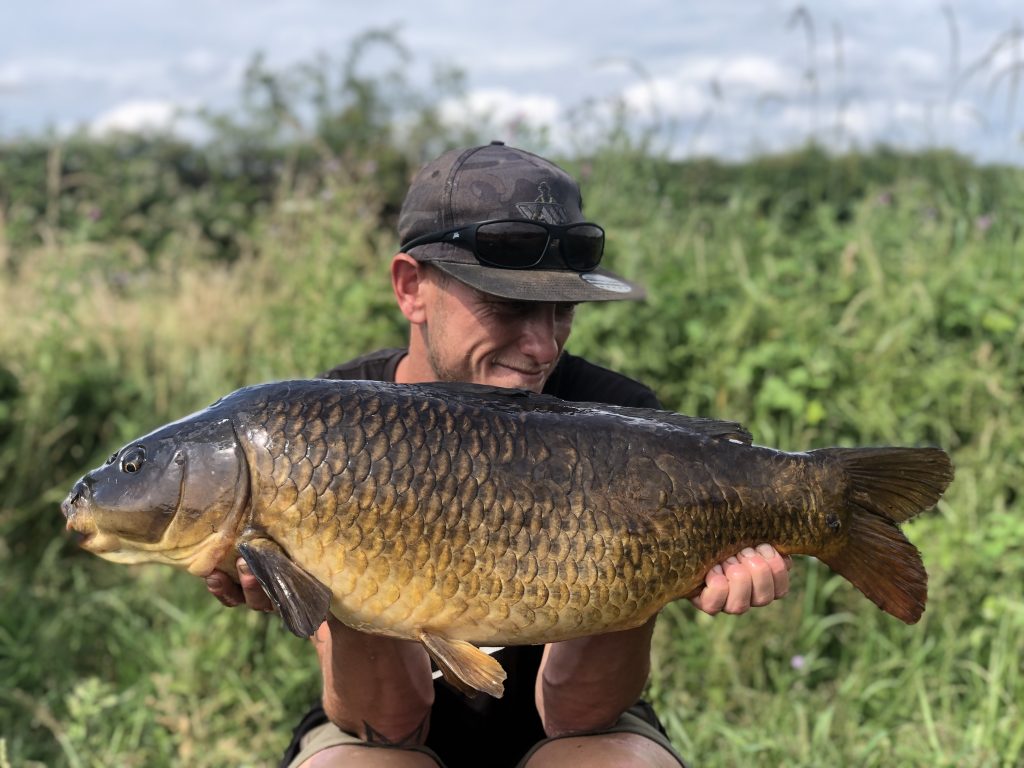 I woke up bang on first light and spotted a fish roll. This was an opportunity to bank another fish, so I reeled in one of the rods and flicked it out to the spot where I had seen the fish, before falling back to sleep, absolutely shattered! Waking up around 6am, I made myself the first coffee of the day, only to be disturbed by a take from a small carp. It was nothing to write home about, but it was a take on the recast rod and a fish I probably wouldn’t have caught without making the effort.

That day we just mooched about again and then returned back to that spot for another night. Unfortunately, we both ended up with a load more bream that night without a single carp in sight. However, it was now my birthday and I obviously wanted to catch a carp. I knew Ollie was feeling deflated after not having a bite and catching a hell of a lot of bream. He had worked his arse off over the time we had been there and I really wanted him to get one, as he had put in a lot of effort, so I suggested we went stalking and go look at the spots where we had seen them before. 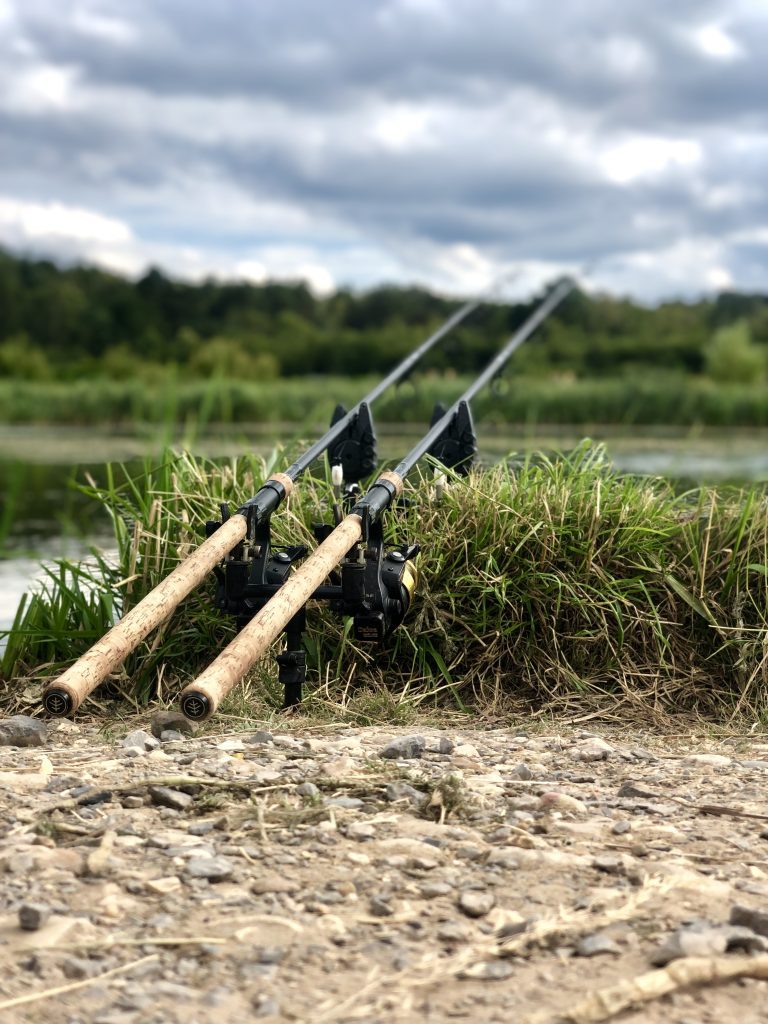 Looking for an opportunity

We soon found some carp holding up in some snags, so we ran back to the van to get a rod each, but not long after we got them on the spots, the fish moved away. We didn’t have long left, so we upped sticks and went off again patrolling the banks, keeping our eyes peeled for any signs. Out of nowhere, Ollie spotted a lump on a mission through the channel of the canal! I got a rod together and tried to lower a slow-sinking bit of bread on its head. It moved up to it, but spooked off – I was gutted! I continued to walk up the bank to find Ollie, but he had gone a mile or so upstream. I decided to walk back to try and find that same lump. Upon arriving I found a little ghost carp, so decided to follow it until it took me to a group of fish. I got a short way up the bank and boom, my little white friend had done its job and led me to a group of feeding fish in a snag. I tied up a little PVA bag of Crayfish Mini Mix and SLK Stick Mix, baited my hair with a 15mm SLK wafter, and lowered it on to the spot. Like the fish I caught on the first day, it took around 30 minutes before bursting into life! The result for a mega canal beast and mission complete as far I as was concerned, a birthday carp and a gnarly old common at that. I can’t to return and have another in the next few weeks. 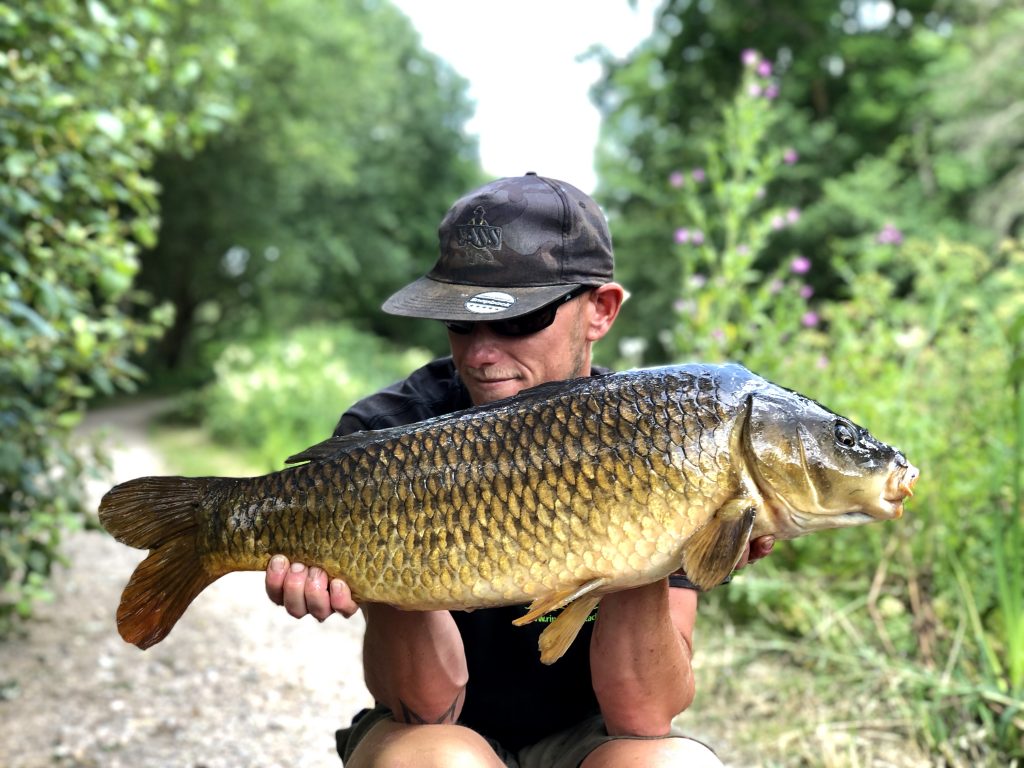