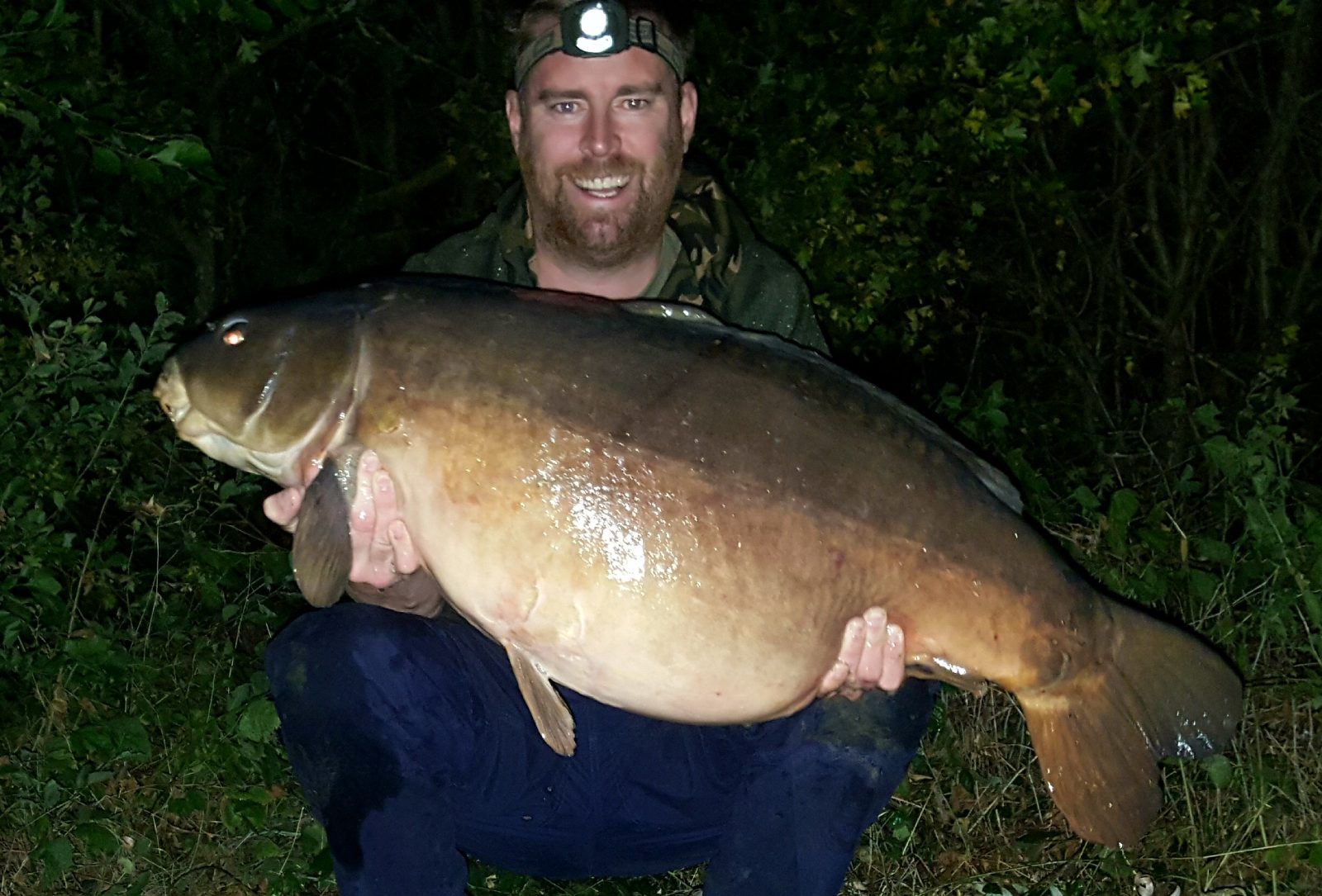 The Bait, the Boat and the Brown!

I’ve been lucky enough these past few years to fish a fairly exclusive set of lakes just outside Peterborough. My job allows me days off in the week, so I’m in the fortunate position to never have to compete with the weekend anglers if I don’t want to. This is obviously ideal, but with a young daughter and a son due any day now, my fishing time is still extremely restricted.

The main lake I’ve been targeting has a great head of big carp, with between six and eight forties at the right time of year. The queen of the lake is the Brown, which a very good friend of mine, Kev, was lucky enough to catch at a lake and complex record of 51lb-plus. This was an amazing capture and its first time at over 50lb, having previously hovered around the 43lb mark. The lake’s first fifty very quickly pulled lots of people out of the woodwork and the lake was the busiest I’ve seen it for the rest of that season.

I struggled a lot with my limited time to get anything going or get on the fish when I was there last year, with just a handful of twenties and upper doubles for my efforts.

Early on this year I decided to go to the dark side and get a bait boat. They have always done the majority of the bites on this lake, and with limited time I needed to take advantage of everything at my disposal. I’m not going to get into the morals of bait boats, etc., as obviously I have no issue with them. Some of the drivers, yes, but the boats, no. However, Kev hated the things and I dreaded telling him!

Anyone who has fished this pit will know early in the year the tench are ravenous. If you are fishing over any kind of bait at all, you will be plagued by them, and they’re not small either. I’ve weighed a couple of doubles and the rest must average nearly 8lb. It’s a tench angler’s dream, but not what you want when you’re fishing little holes in the weed at 100-plus yards, and that’s without thinking of the cost; I dread to think how many leads and hooks I’ve wasted on the red-eyed ones.

When the tench have spawned, they do tend to slow down a bit, but then the weed gets up and you’re constantly getting wiped out by huge rafts of floating weed. Sometimes I do question why we do it. This led me to having a little flirt with a couple of other lakes on the complex. I caught a couple of nice fish, but couldn’t wait to get back on the ‘Big with the Black Pig’, as Kev was now calling it.

I knew I’d only have a handful of sessions left, as the wife was eight months pregnant and we had a two-year-old girl running around. I gave myself three more chances to get out. I tied up rigs and prepped my bait. As I would basically be having the whole winter off, I decided I was going to go big, empty my freezer of Secret 7 and try to feed those tench off, which unlike most years were still a pain. I think my first night back produced nearly 20! Mental.

With the help of the boat’s echo sounder, I found a couple of lovely little spots, small holes in the weed that would be nearly impossible to find, bait and present effectively by normal casting. Two rods were sent out to these spots and the third was much closer in on a larger spot that could be cast to if needed.

This session was just a quick overnighter, and bearing in mind it had been probably a year since I’d last landed a fish, I was surprised when one of the little-spot rods went off at one o’clock in the morning. I knew it was a carp straight away; it wasn’t the normal tench bite and it even took a bit of line. When I got it in, it was a low twenty and I was over the moon with it. Not one of the targets, but a fish, and it showed I was maybe on to something. No more action followed that session, but I had a whole day and night planned for the following week. 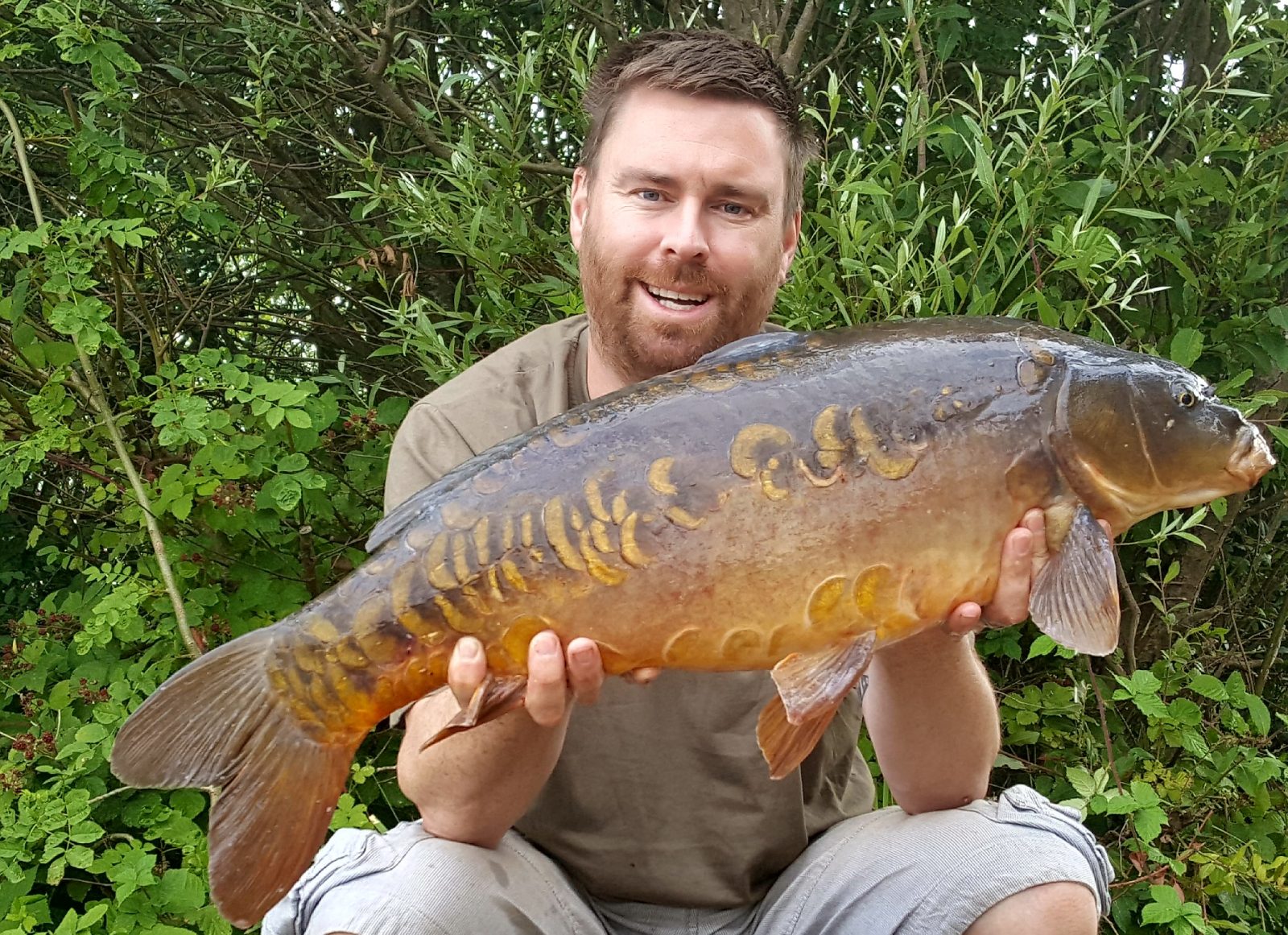 An unexpected but very welcome result

This time I had some special hookbaits to take with me. As I said, the tench were still on a mission, so I wanted something that would hopefully restrict the number of bites I got from these bait robbers. I had a couple of tubs of 18mm S7 Corker pop-ups in the garage, with my own salty twist. I’d read on the Internet few years ago about soaking baits in salt and had decided to give it a try. I air dry the baits for months until they are bone dry but still spongy because of the cork dust. I then soak them in warm water and salt – a lot of salt. Using the water straight from a kettle, I pour salt in and keep stirring until it all dissolves. I then add a good helping more salt! I soak the baits for a few days, stirring them whenever I remember, and then dry them out again. I repeat this for a couple of weeks, until the baits are completely covered in salt crystals. 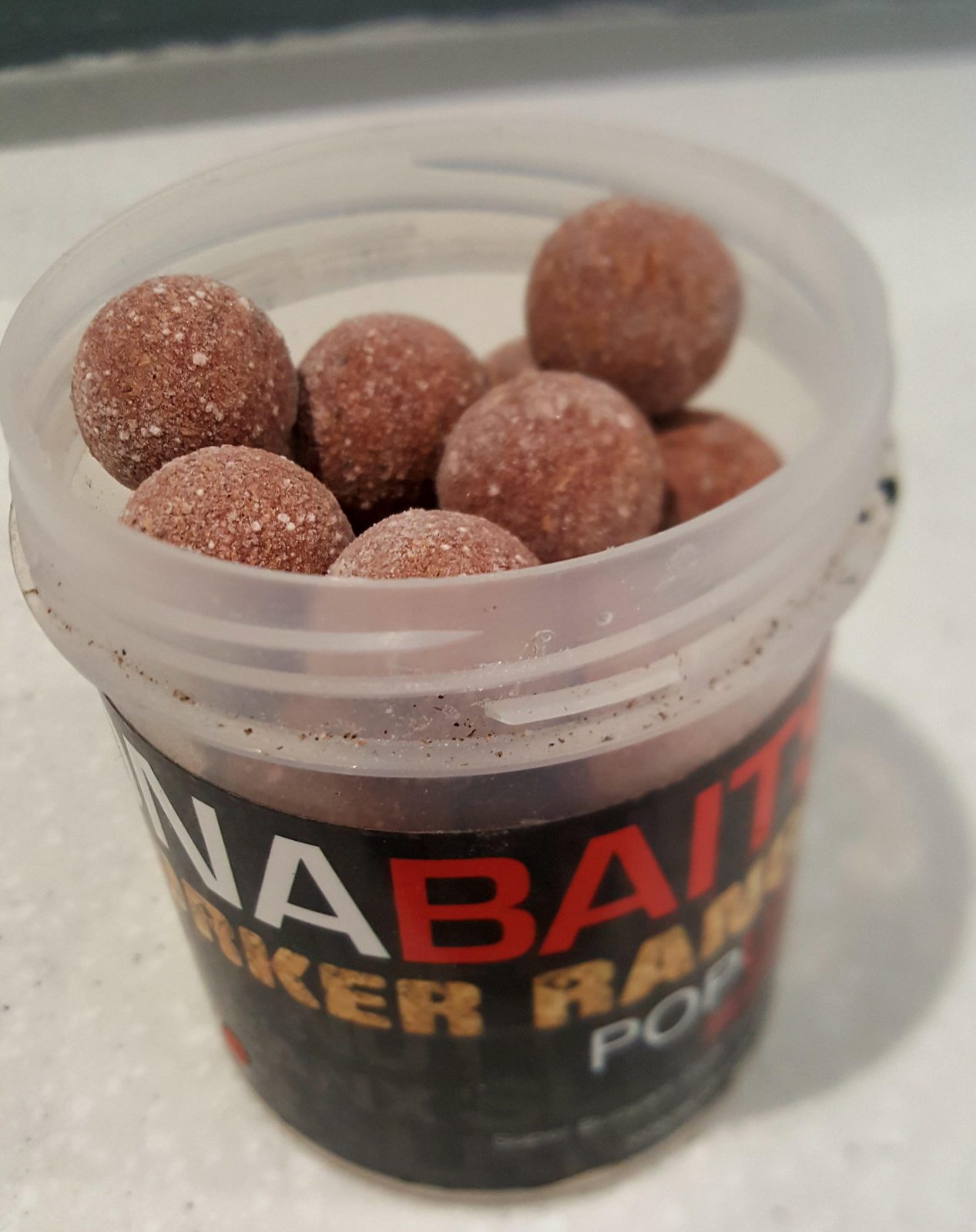 My salty balls of goodness

Armed with these salty balls of goodness, I managed to get in the same swim and soon had rods on the same spots as last time. I felt confident the spot I had the last fish from would do the goods again, so wasn’t surprised when at two o’clock in the afternoon the other long-range rod absolutely melted off. The fish weeded itself up quite quickly and then came in like a bag of spuds. I’ll be honest here, when it got close enough I could have sworn it was one of the A team. When I cleared the weed from the fish in the net, I was met by the sight of a stunning low-twenty stockie, not what I was after, but again, any fish from this lake was a bonus and my tactics were definitely working. 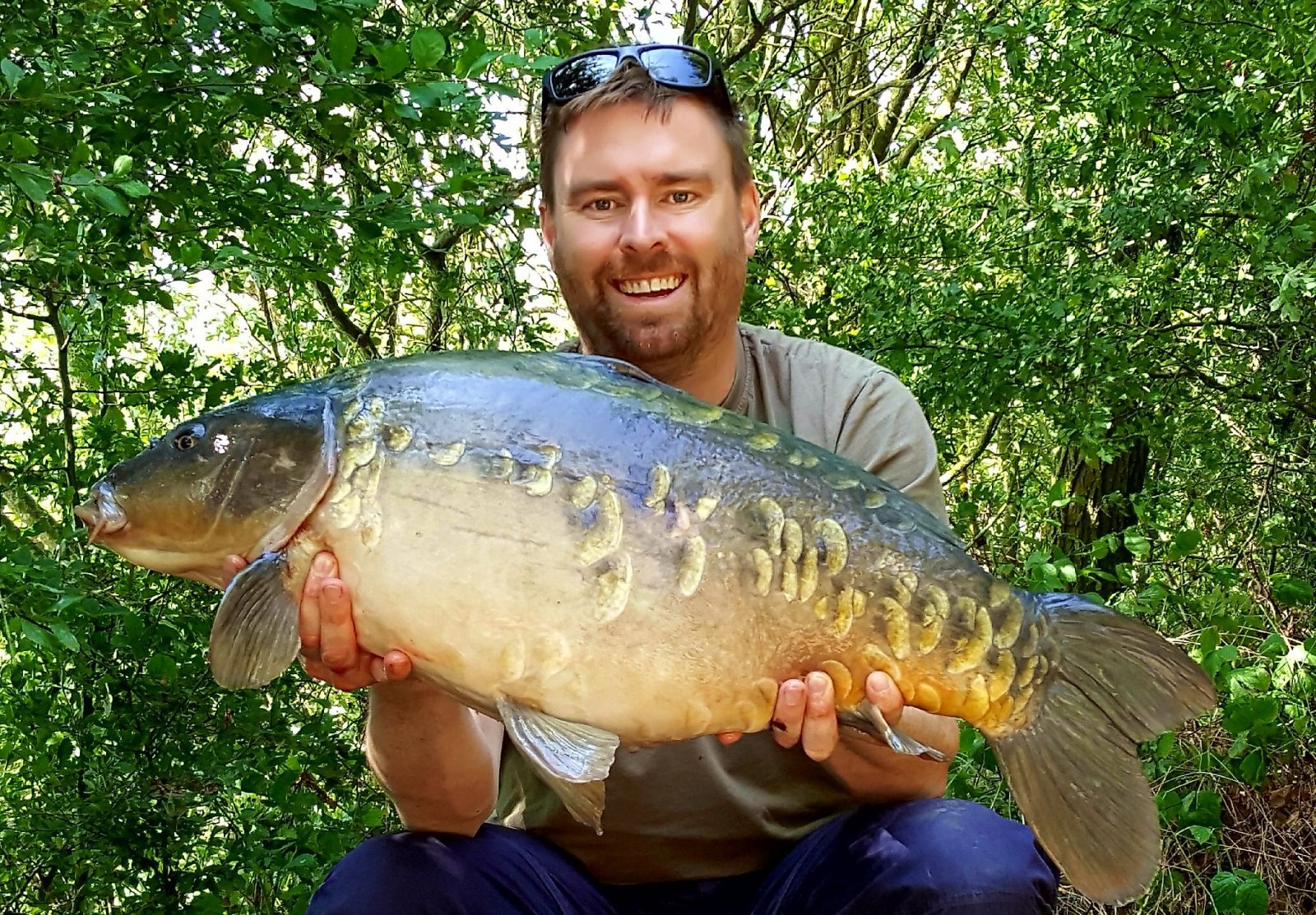 My second fish in as many nights

Then the tench turned up and started getting double and sometimes triple takes. They were taking the bait on the drop out of the boat; you could even see them waiting on the echo sounder! I was very close to packing up and going home.

My brother was due to stay at mine that night, so I popped home to have a curry, but was soon back down the lake getting the rods out. I was baiting heavily with mixed-sized Secret 7 boilies and Secret 7 pellets. I’m sure the pellets were like a homing beacon for the tench, but with two carp in as many trips, I wasn’t going to stop using them. That night I must have had close to a million more tench! I’ll say at this point the lake had been very quiet this year; tench, weed and the fact the Brown had been out a couple times at 43lb meant the place wasn’t getting much attention. I think this meant the tench were still starving, so it was no surprise at six o’clock the next morning another one had seemingly hung itself on the rod that had done the carp the previous day. It was pouring with rain, so I took my time to get my waterproofs on and eventually picked up the rod. The line went through a little ball of weed 20 yards out, before the fish then shot off about 60 yards to the left of where I had been fishing. It was clearly no tench, but moments later it was gone. I was kicking myself. Two takes in one session was unreal for me on this place and laziness had cost me a fish. Because of all the tench, I had settled on touching up the hooks instead of replacing them. That was going to change, so I made sure I had plenty of hooks for my final trip and would change them after every tench.

As this trip was going to be my last before I was busy changing nappies, I’d decided on doing a two-nighter and managed to send the wife off to her parents. I actually got down and set up straight after work, and managed to put the rods out in the same swim and on the same spots just on dark.

I had a very quiet night, but the next day a storm rolled in. I was right on the end of it and at times it was ridiculous. If I’d have had a take I wouldn’t have known, as the wind was making the alarms bleep every few minutes. This was confirmed when I reeled in mid-afternoon to find the close-in rod (the only one not to have done a carp at this point) absolutely solid in the weed. I managed to crank the massive weedbed in and, surprise, surprise, there was a little tinca in the middle of it. 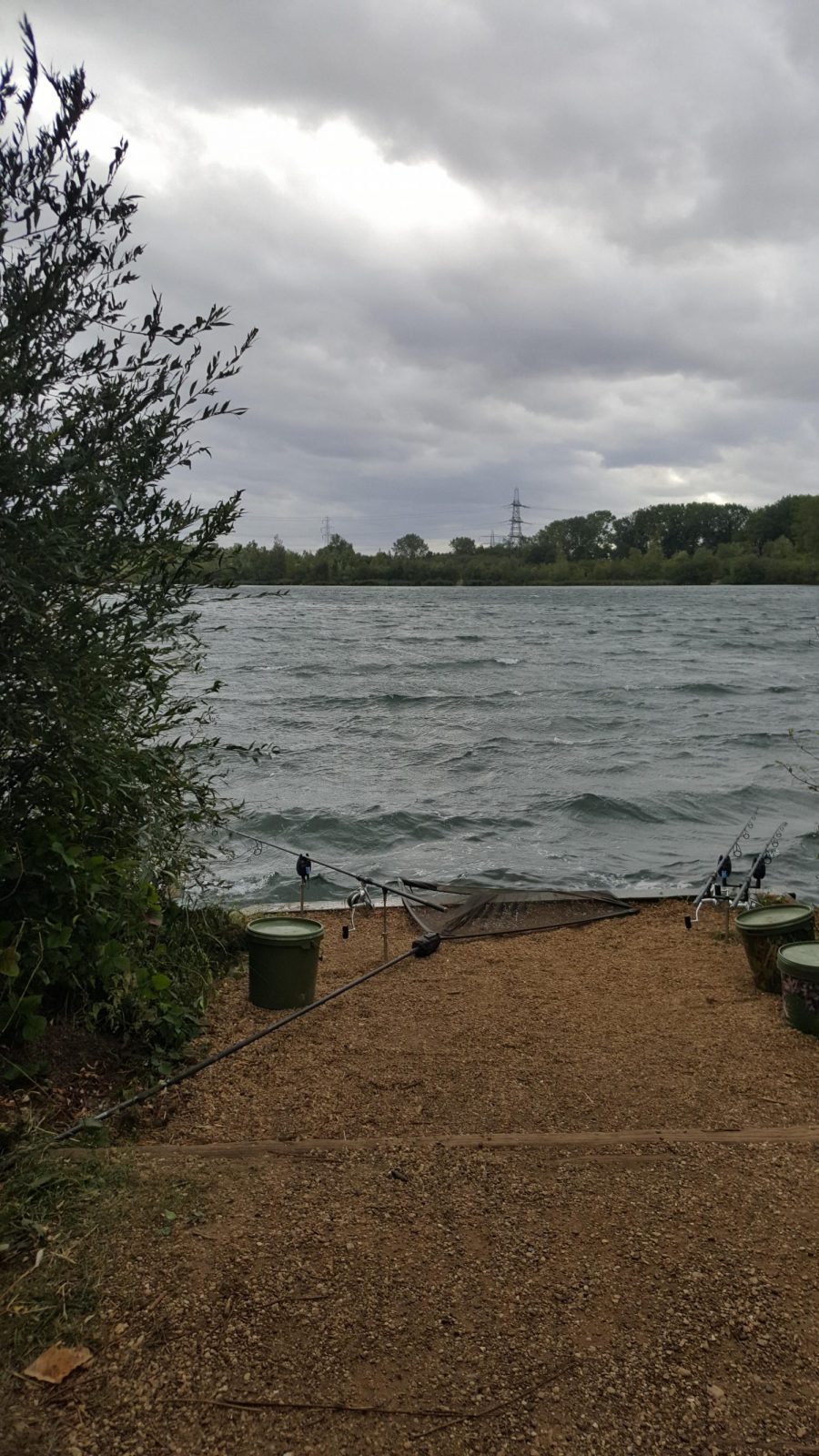 A storm rolled in on my final trip

I managed to get the rods back on the spots while there was a bit of a lull in the wind and sat back and held on!

The only good thing now was the tench didn’t seem to like the wind, so I managed a decent bit of kip, until I was woken at 2am by a one-toner. I was straight out on the rod, which was the same rod I had pulled the massive weedbed in on earlier. This felt similar, just a big weight being dragged in with the odd head shake. For some reason, halfway through the fight I thought I was attached to a carp, but very soon settled on the belief it was a weeded-up tench. With the fish just off the rod tip, I shone my head torch on it and there in front of me was a carp, so quickly turned the head torch off! I didn’t see it properly, but thought it looked quite long and was probably an upper twenty. I netted the fish, peeled the mesh back and saw the size of its back. This wasn’t 20lb or 30lb; it had to be one of the biggies. I turned the fish over and saw a distinctive lump on its side… the air turned blue! “It’s the Brown, I’ve caught the f***ing Brown,” I kept repeating.

I took some snaps and got her back as quickly as possible, knowing she hadn’t fought at all. The feeling was something I’ll never forget and a moment I’ll have running through my head for the next few months whilst I’m stuck at home doing the family thing.

The mighty Brown at an incredible 50lb 8oz