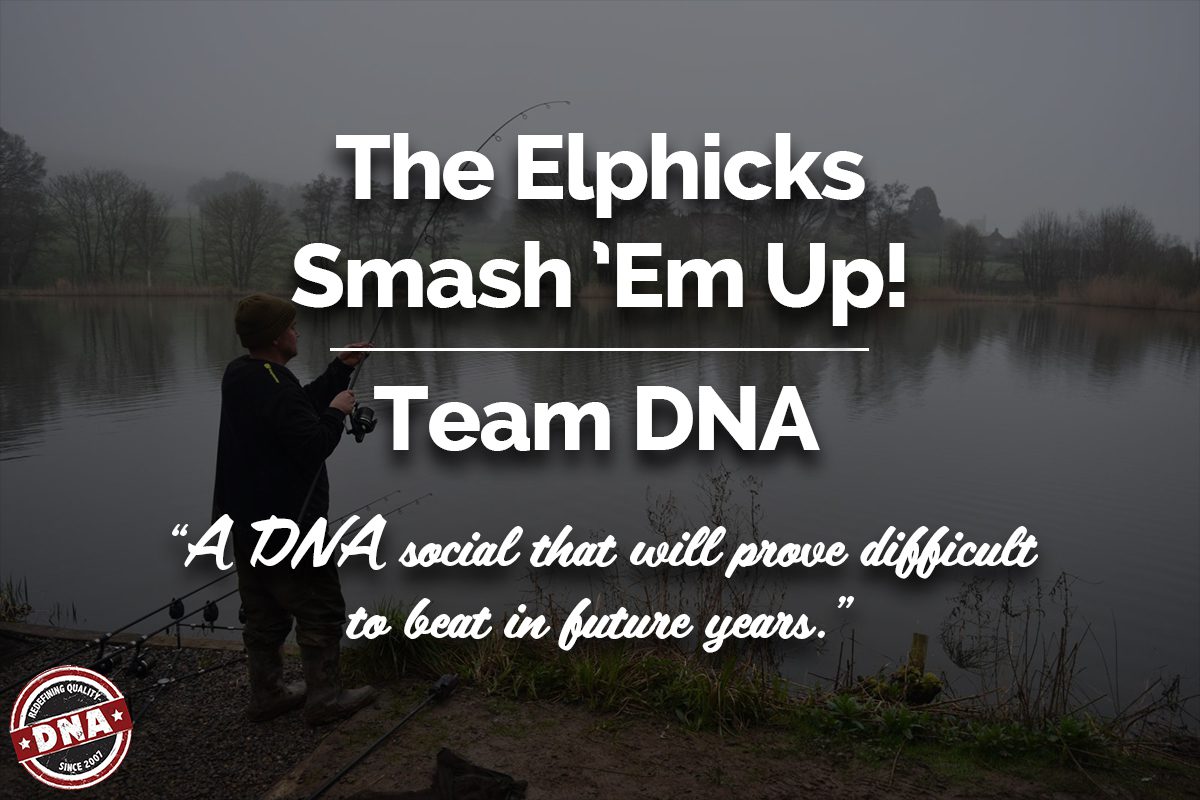 The Elphicks smash ’em up

There are some exceptional fisheries in the UK these days that cater for exclusive bookings, but few have been as popular with groups of anglers for such a longer period of time as the Elphicks complex in Kent. Its many purpose-built lakes stocked with carp to huge sizes and good facilities really do create the feeling of fishing in France. It was for these many reasons we chose it for the annual DNA social.

Anybody who was keeping abreast of the DNA Baits social-media accounts over the winter can’t fail to have noticed some of the incredible catches on the Elphicks complex by Perry Alabaster. After initially starring in the second episode of Winter Series 3, which is available to view on YouTube, alongside Lee ‘Mozza’ Morris on the North Lake, Perry went on to record numerous multi-fish catches on the venue, while many other anglers struggled during what felt like one of the longest winters in history!

It was thanks to Perry’s dedication that a three-night session in April was secured after he travelled down to Elphicks from his Cambridgeshire home on New Year’s Eve to be first at the gate for when exclusive bookings could be made for the year ahead the following day.

Three and a half months later and eight excited but somewhat tired anglers met at the gates of the Elphicks complex shortly before they opened at 7am. A group walk around the North Lake revealed numerous signs of fish activity all over and, when it came to the draw, nobody was too disappointed with where they ended up, as the fish were clearly very active.

Rob O’Brien drew first choice and plumbed for the second swim along the road bank, giving him access to the margin along the no-fishing bank. He would share the spot with Perry, who ended up in the swim directly opposite. Wesley Prestage, Chris Donovan and Paul Monkman opted for swims in the deeper end, while Adam Noon, Chris Foers and Steven Millard decided to try their luck in the middle segment in between the islands and the shallows.

First blood, well, the first two fish, in fact, went to Paul, in the form of a couple of 17-pounders on zigs coated in Sticky Sweet liquid. Paul had expected to be fishing over bait, but when he hit a fish on the way down while leading around, he switched over to zigs and was rewarded almost instantly. Paul also added a low-twenty grass carp for his troubles on the same tactics a short while.

After realising the fish were clearly up in the water, Chris Donovan made a tactical switch to zigs and picked up a 21lb-plus mirror within minutes. It was beginning to look like zigs in open water was going to be the winning tactic, that was until Mr Alabaster entered the fray. Fishing the same marginal spot as Rob, Perry began to land a succession of fish over the course of the afternoon and evening, kicking things off with a low-twenty mirror and then getting into some of the better fish, including a 30lb-plus common.

Unlike many popular day-ticket waters in the UK, maggots are not banned on Elphicks, so Perry was baiting heavily with a mixture of maggots, 8mm NuttaS boilies, NuttaS Hydro Spod Syrup and Krill Meal along the margin, and the fish were responding in kind.

Come seven o’clock on the first evening, 12 fish had been out around the lake to four of the eight anglers. The other angler to get amongst the fish was Rob in the form of a 16lb mirror, and the following morning he had taken that tally to four, including mirrors of 35lb 9oz and 32lb 13oz. Again, Rob was incorporating maggots into his mix, coating them in S7 Hydro Spod Syrup. On the hair he was using a 10mm Wraysberry pop-up, which he was tipping with a few maggots for added visual attraction.

Perry had also enjoyed a prolific morning, with one fish in the sling and another two in landing nets during a particularly hectic spell. Amongst those fish was his second 30lb common of the session. It was evident by this point the fish that seemed so spread out at the start of the session were now seeking sanctuary in the deeper water in front of Perry and Rob and the pair were capitalising big style!

There was some good news from the shallows, where Chris Foers had managed pick up his first fish, a mid-double scaly, while Wes had also got off the mark with a 26lb mirror on a zig coated in PB Intense Booster.

After that, however, the day belonged to Perry and Rob, with numerous fish coming their way. The maggots were clearly playing a key role, but what had become obvious was the more Hydro Spod Syrup the lads were putting on their freebies, whether it was S7, NuttaS or the new Pineapple flavour, the faster the bites were coming, the heavy liquid getting those wrigglers down to the lakebed much quicker and away from the attentions of birdlife.

Shortly before dark on the second day, Perry notched up his 13th and biggest fish of the session so far, a 33¾-pounder that was also his fourth 30lb-plus common of the trip.

The night-time had proven fruitless on the first evening, with the open-water spots failing to produce around the lake, but on night two, that was to change dramatically for Rob and Wes, with both of them getting amongst the fish. Then, sometime around 3am, a shout of “Boooooom!” could be heard from Rob’s swim, as something special rolled over the lip of his net.

The reason behind Rob’s excitement was revealed later that morning, when a stunning common of 41lb 10oz was held aloft for the cameras. With the fish treated and returned safely, Rob lifted out another common from the margins, which he had banked earlier that morning. It was another common, a silvery coloured fish that didn’t look much smaller than the one Rob had just returned. Indeed it wasn’t, tipping the scales at 40lb exactly and completing a brace of forties in a morning and a fantastic 14-fish hit for Rob in just two days.

That morning, four of the eight anglers pulled off the lake to return to the real world, meaning the rest of the lads could spread out and hopefully capitalise. Wes certainly made use of the extra room, moving into Rob’s swim and picking up a few nice twenties before it was time to call it a day, while Steve was rewarded for his persistence with a 26lb common from a marginal spot after moving into the deeper water.

Steven Millard got in on the action with this 26lb common

The final say, however, went to Perry, who continued to catch consistently until the final morning. His final tally was a staggering 23 fish, including nine thirties to 38lb 2oz. It was Perry’s best-ever catch on the venue and one of the best by a single angler in recent memory. All in all, a fantastic session and a DNA social that will prove difficult to beat in future years.