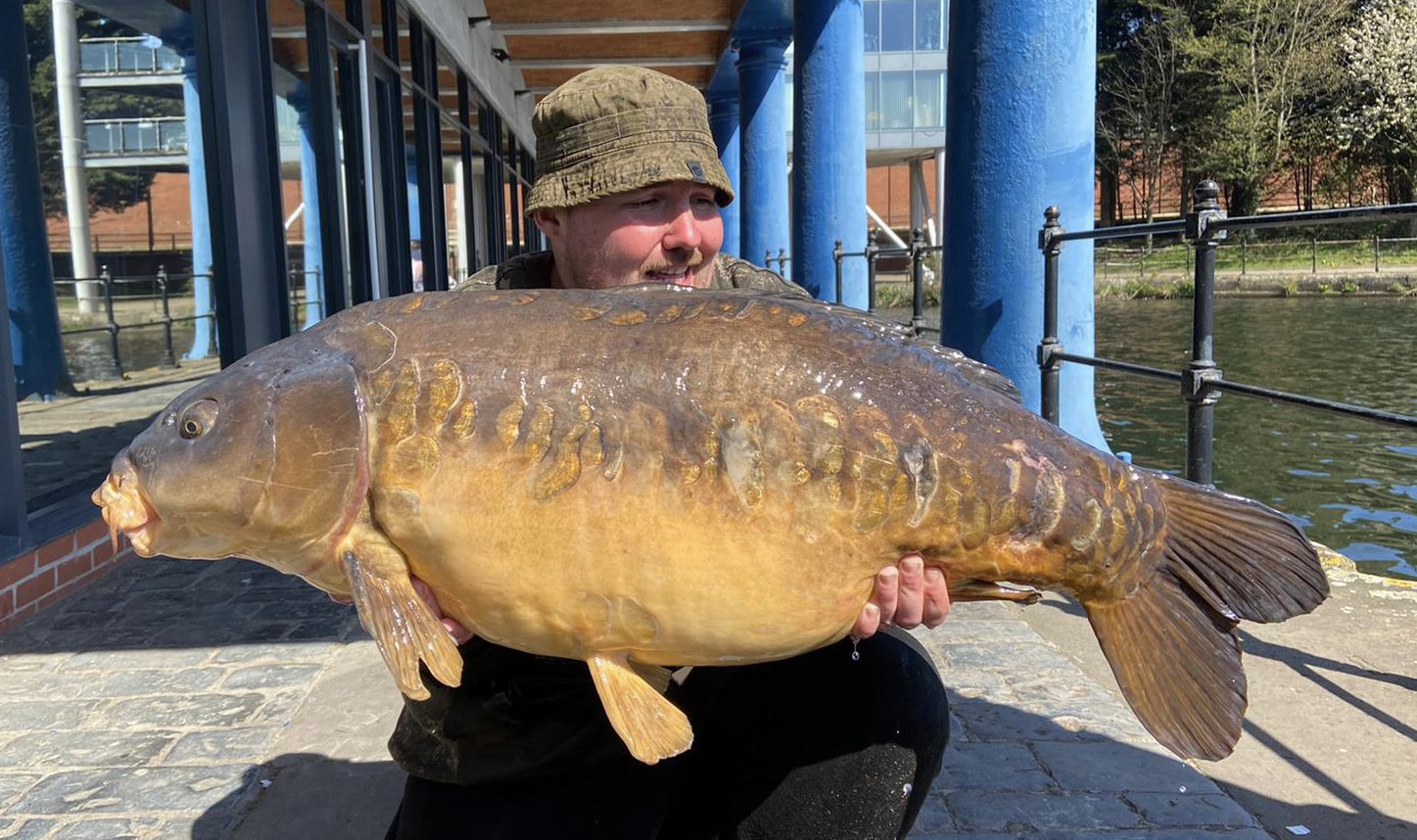 “The Wharf is a place of dreams”

Ryan White described the Wharf as a “place of dreams” after an incredible session that saw him land the biggest mirror and the biggest common in the lake!

It hadn’t all been plain sailing for Ryan on this urban Cardiff venue. In fact, he’d been having somewhat of a nightmare prior to this particular session. However, his dreams really did come true on this occasion, with the mighty Paw Print at 41lb 8oz, the Slippery Common at 39lb 6oz and a 32lb 6oz fully scaled common known as Tomi all gracing his net during a memorable session.

“I had been on a long blank run, so thought I’d book a week off work and give it a proper go,” explained Ryan.

“I started at the Beer Garden peg and blanked the first night, but loads of fish were on me, so I decided to stay put and do another night. I had seen more fish showing to my right, so I cast out a single Ronnie at it and it went off in the morning, producing a low double. However, even though fish were on me, they seemed small, so I packed up and decided to move to the Pillars, where the big fish had been coming out.

“I got down, set the kit up and fanned the rods out all in the margins, feeling especially confident with my one rod. This was on a shelf in 10ft of water which drops down to 25ft-plus and the fish had been holding there over the past couple of weeks.

“The first night I blanked, but little did I know what was just about to unfold! I reset my all my rods that morning, using simple blow-back rigs baited with Secret 7 EVO Boosted Hookbaits, tipped with cut-down pink Secret 7 Half Tones wafters. I then clipped up my rods, put a PVA nugget on and waited for the foam to hit the surface, before baiting over the top with a light scattering of whole and crushed Secret 7 boilies and Secret 7 pellets, coated in S7 Hydro Spod Syrup and S7 Stick Mix.

“The action began soon after resetting the rods, with rod one absolutely one-toning! The fish gave me hell of a battle. It got snagged on some scaffolding bars, but I could see the fish and its size! Finally I managed to get it free and out into open water, when it went on some long run, before snaking out of my net on three separate occasions, until eventually she was mine, the might Slippery Common at 39lb 6oz. 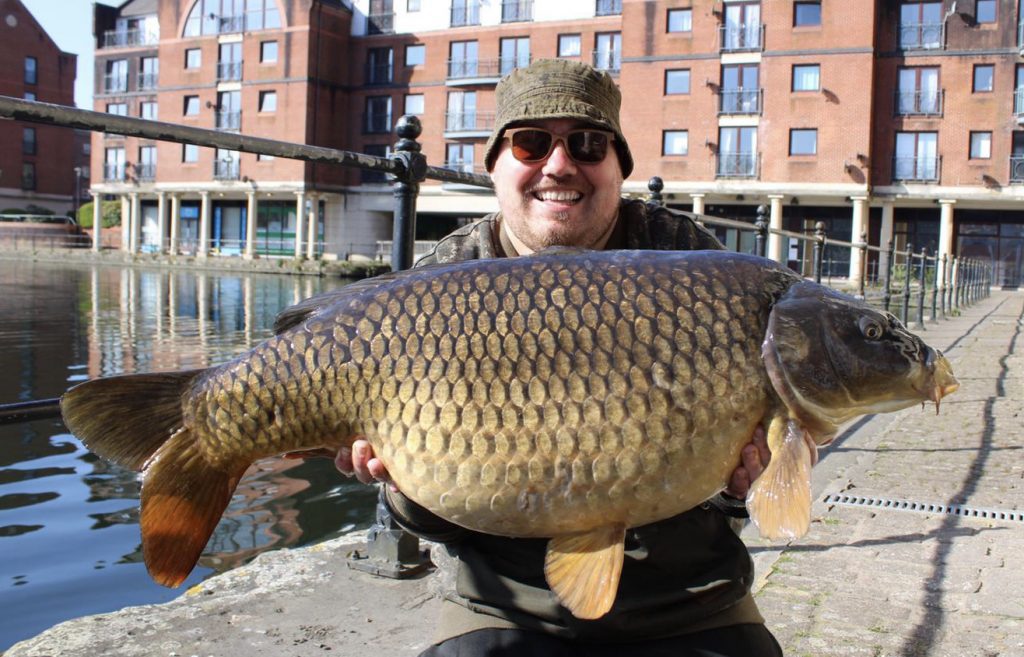 The Slippery Common at 39lb 6oz

“I reeled my rods in and wasn’t in a rush to get them back out. I had to make fresh rigs, etc., so decided to rest the swim for a bit. Six hours later, I thought it was time to get them back out, adopting exactly the same baiting approach as before. Incredibly, within three minutes of the rod being in the water, one of them went into meltdown! This fish felt huge, going on huge runs to the snags and almost cutting me off on the deep shelf. Again, this one got snagged, as this was a really bad area of the lake, and we could see it in the clear margins. I knew which fish it was and from then on it was panic stations! Even the bailiff confirmed it. His words still make me laugh now, “Ryan, don’t panic; there’s only a 45lb mirror on the end of your line.’ She slowly kept coming and thankfully came free of the scaffolding poles. After going on a few more huge runs towards the deep bowl, the mental battle was over and the fish slid over the cord. Words can’t ever explain what I felt like. I couldn’t stop shouting. I was full of joy. The biggest common and the biggest mirror just six hours and three minutes apart – and I hadn’t even fished for those six hours!

“A few of the lads came to help and we did the weighting and pictures. It was confirmed as my first Welsh forty, the awesome Paw Print, weighing in at 41lb 8oz. 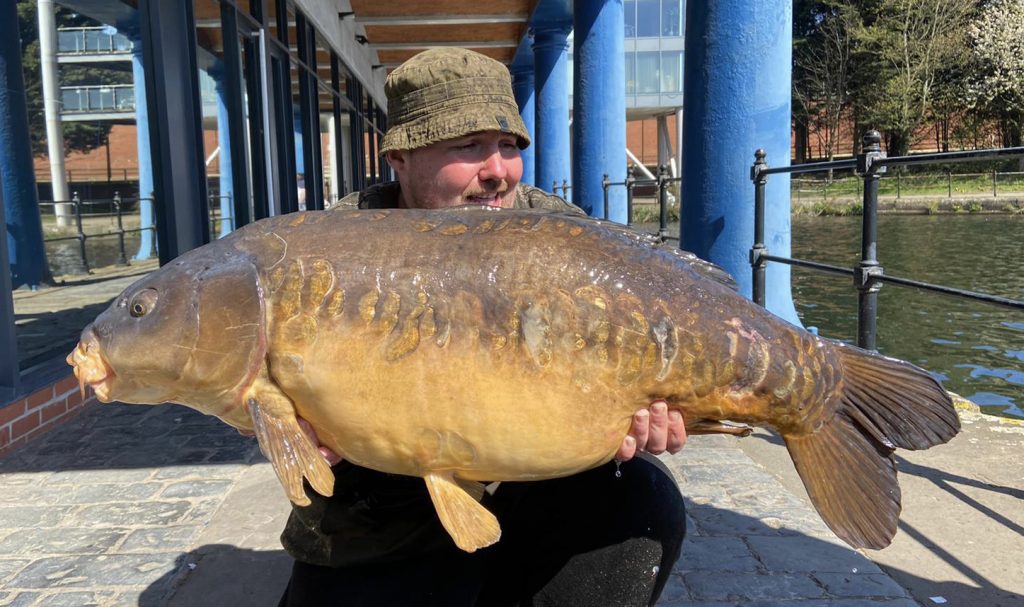 “The night went by with no more fish, but the next afternoon there were a lot of shows, so I was feeling confident. The rod went off again, this time producing a small low double. I clipped the rod up, but just as I was putting on the nugget, I couldn’t believe how many fish were on the spot, so I opted not to cast out to prevent spooking them.

“Just two hour later, one of the rods went into meltdown again. I couldn’t believe this was happening, as I had been really struggling on the Wharf until this point. Again, the fish headed for them dreaded snags, but after another mental scrap, up she popped and into the net went Tomi, an original fully scaled mirror of 32lb 6oz. This was actually my favourite capture of them all, as I am a sucker for a fully.

“The Wharf is a place of dreams and this time a dream came true for me.” 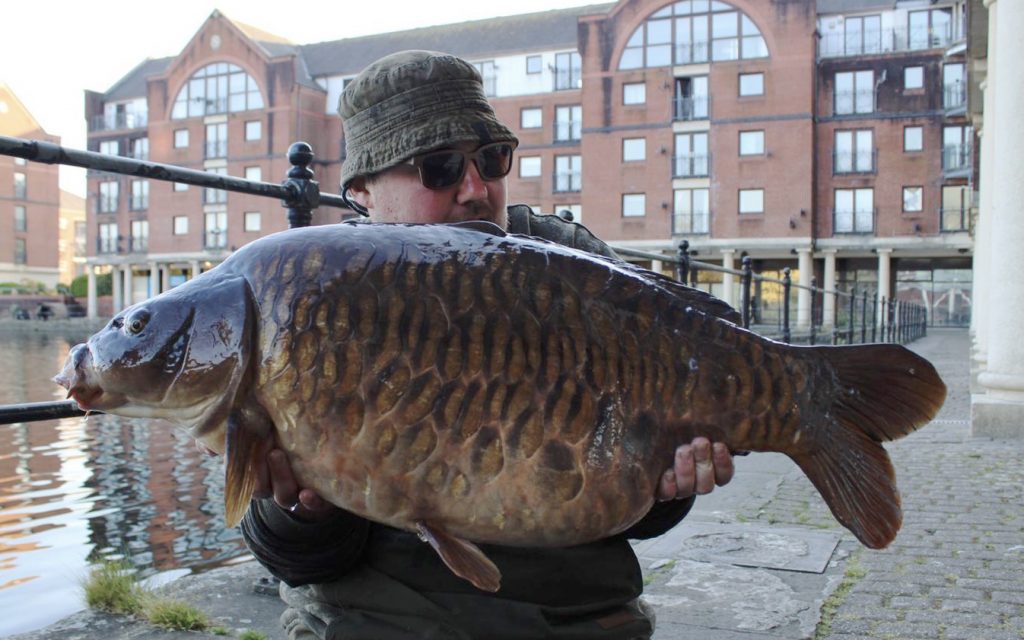