A winter social on Berners Hall in Essex gave Nathan Geary a three-fish catch, including two thirties to 37lb!

“Within an hour of getting the rods out, I was bent into a hard-fighting 24lb mirror,” said Nathan. 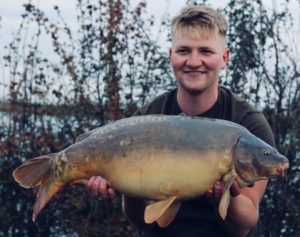 Kicking things off with a 24lb mirror

“From then on it was very quiet, so the next morning I decided to put a little bit of bait out to see if they would get their heads down. Later on that afternoon I had a very slow take. As I lifted into the fish, it felt like nothing was there, but before I knew it, a 37lb mirror was gracing my net! 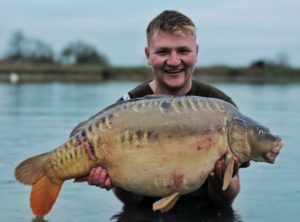 The biggest of the session at 37lb!

“Again, it fell quiet for the night, but on the last morning, just as I was packing down, I had a massive drop-back on the left-hander and went on to land a 31lb fully scaled mirror.”

Nathan caught all three fish on PB wafters presented on slip-D rigs over a mixture of 15mm SLK boilies and corn, which he’d soaked in Baileys and Tiger Nut Extract.