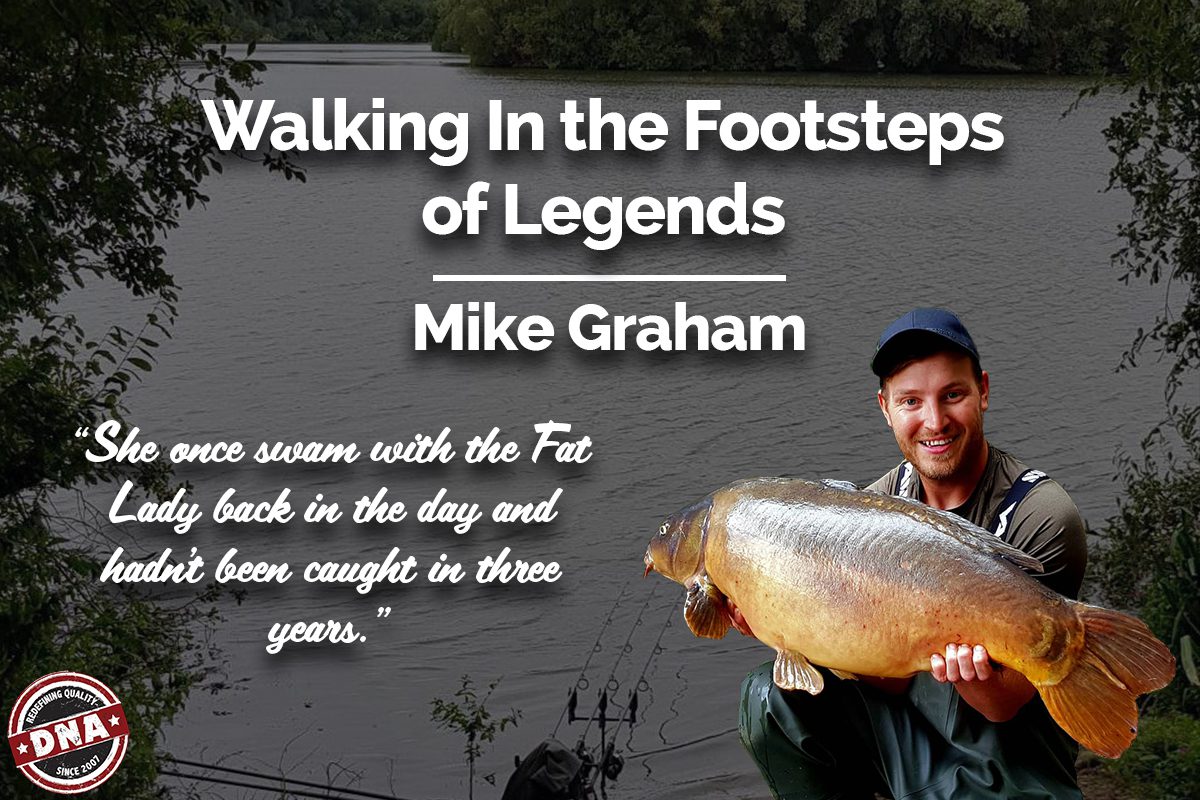 Walking In the Footsteps of Legends

First of all, I’d like to say a big thanks to Simon Sparks for organising this DNA social, and an even bigger thanks to Gordy Howes for allowing the team to fish the impressive Lagoon on the mighty St Ives complex.

I had visited the complex once previously some four or five years ago when my brother and I took up an opportunity of a few days’ fishing. When we first arrived back then it was at first light and took until early afternoon for us to recce. It could have easily taken all day, but we were keen to get the rods out for our session and settled for Meadow Lake. This time around I was down to fish the Lagoon with the DNA Advocate Team. I hadn’t met anyone on the team yet and certainly couldn’t say no to the prospect of a St Ives fish or two in my album, so I jumped at the chance when Simon threw some dates out there.

A week or two leading up to the arrival day at St Ives, the lads were keen to get down there as early as possible, some of whom met for breakfast beforehand. I had a few bits I needed to do first that morning, so I was in no rush to head down. I think it was around 11.15am by the time I pulled into the Lagoon entrance. If you know the complex, where you drive in there is a peg on the Lagoon immediately on your right. The wind was heading left to right diagonally into this bank as predicted on the weather report, with an SSW wind. The whole weekend was forecast to stay the same with overcast conditions and temperatures around the low 20s – the best fishing conditions I’d seen for a while.

Confidence was high, but probably not as high as the buzz I was getting arriving at the lake. Gordy had been teasing us all on the week leading up to the social, posting scaly bangers on the St Ives page. With this all flying around in my head, I set about driving around the lake before bumping into Ron and John, who were in a swim called Nick’s. I had a quick chat with them before continuing my drive around. I soon realised where everyone was and to my amazement no one was on the bank with the south-westerly wind. I soon turned the van around before heading back to the bank where I first came in. After a quick look at all the swims, I settled for the Pipes swim. 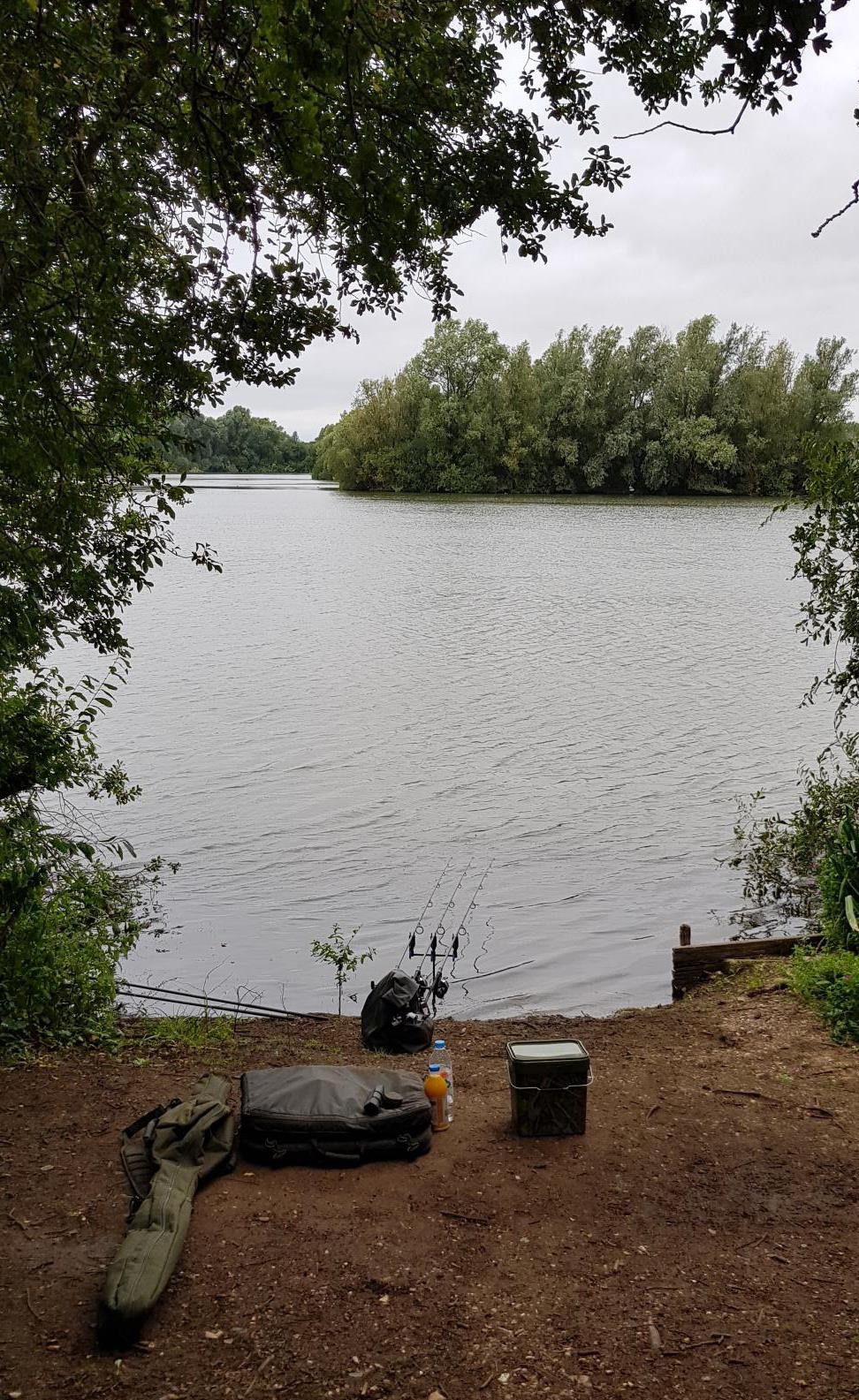 My view from the Pipes swim

The first thing I did was set about getting to know what was out in front of me, and with the wind and angling pressure in my favour, I wasn’t looking to cast far. I soon realised the deepest area was 13ft with thick weed starting about 50-60 yards out in places. I had found a nice spot in 10ft about 40 yards straight out in front and decided all my rods and bait would go there to concentrate the fish in one spot, instead of two or three different spots with lines going everywhere. Before I even tied my rigs and set my three rods up, I decided to mix up a bucket of 5kg of hemp and maize, with about 1.5kg of crushed SLK and S7 boilies, all coated in the highly impressive Betastim liquid. I clipped up the spod and sent the whole contents of the bucket to the spot, then set about fashioning some fresh rigs together.

I wanted to increase my chances of a bite, and with me recently watching an underwater video, a few reminders were fresh in my head, the main one being that we get done by carp more often than we dare imagine. So, with the spot being so clear, I wanted to fish 4oz leads on lead-clip set-ups so I could set the hooks and then have the lead come off should any fish I may hook make it to the sanctuary of weed. I kept my rigs short, no longer than 4-5 inches, all on coated 20lb braid with size 4 hooks. I decided to go with three different rigs for the spot: a snowman tipped with a 10mm PB pop-up, a low hinged rig with a pink S7 Half Tones pop-up and a Milky Malt wafter tied close to the shank of the hook.

Knowing it would be a waiting game, I wanted to make sure there was plenty of bait on my spot so when the carp did turn up there would be plenty there for them to eat without me having to make further disturbance by topping the swim up; not without a bite, anyhow.

As the light faded, I also faded and fell asleep early, meaning I was wide awake from midnight until about 3.30am, before grabbing another hour or two before the sun started to rise. I remember feeling a little disappointed I hadn’t received any liners, but made a brew and headed out to sit behind the rods. At this point I was thinking how spectacular the lake was. There were 16 of us on and I couldn’t see a single one of them from behind my rods. That thought was quickly interrupted as a fish rolled to my left, then another just beyond my spot. Shortly after a third fish, a nice common, rolled just off my rods to the right. The buzz was immense, and as I chain-smoked what seemed like an endless supply of tobacco accompanied by as many teas, it was soon 11.15am and the fish shows had died off. Doubts were flying around my head, but before doing anything, I decided the best course of action was to cook myself some food.

Halfway through cooking some sausages, I heard a single bleep from the rods. As I looked up, the right-hand indicator as twitching. “I’m having that,” I thought as I headed for the rod. Before I got to the rod it was in full meltdown! I hit the rod and there was a heavy weight as if it was in weed, but I knew I was about 20 yards clear of anything thick. I continued to battle the fish as it kept low, eventually kiting right as it tried to make the sanctuary of the overhanging trees. With a little pressure I had won the battle, as she soon appeared in the shallow margin in the weed. A few thrashes and lunges in the weed had me fearing the hook may pop out, but I soon had her in my grasp. I left her in the net while I set about getting the mat, bucket and scales ready before hoisting her out. Biting the main line, the net was rolled up and slid into the retainer. As I hoisted her out, I remember thinking it might be a 30-pounder. I peeled everything pack to be greeted by an immaculate leather-looking mirror with just a couple of scales on the wrist of its tale. I popped the hook out and set the scales up on the crook. As I hoisted her up, I saw the needle fly past the 30lb mark and settle just shy of 36lb. A few choice words and a solitary celebration saw me pop her back in the retainer until I could rally some assistance for photos and a second weigh on the scales.

Ron, who was fishing Nick’s swim, ran around to assist, a moment I was happy to share with him as he hadn’t seen a fish this big in the flesh. A few photos and a quick video were taken, before a second and more accurate weighing revealed a weight of 35lb 8oz. By now the lads on the social were anxious to see some snaps. I sent one or two quickly in the group which certainly caused a little stir, as it was one of the 20 original residents of Lagoon. Simon and a syndicate member rang me up asking for a few photos to be sent their way so they could establish which fish it was. At the same time, a syndicate member had driven over from the Meadow after hearing the news and was able to shed some light on my capture. It was a fish known as the Leather, and at 35lb 8oz it was her biggest-ever weight. She once swam with the Fat Lady back in the day and hadn’t been caught in three years. I was awash with adrenaline, anxiety and jubilation at this point; not only had I just landed a new personal best in the historic waters of Lagoon, but I had enjoyed a cuddle with a slice of history. 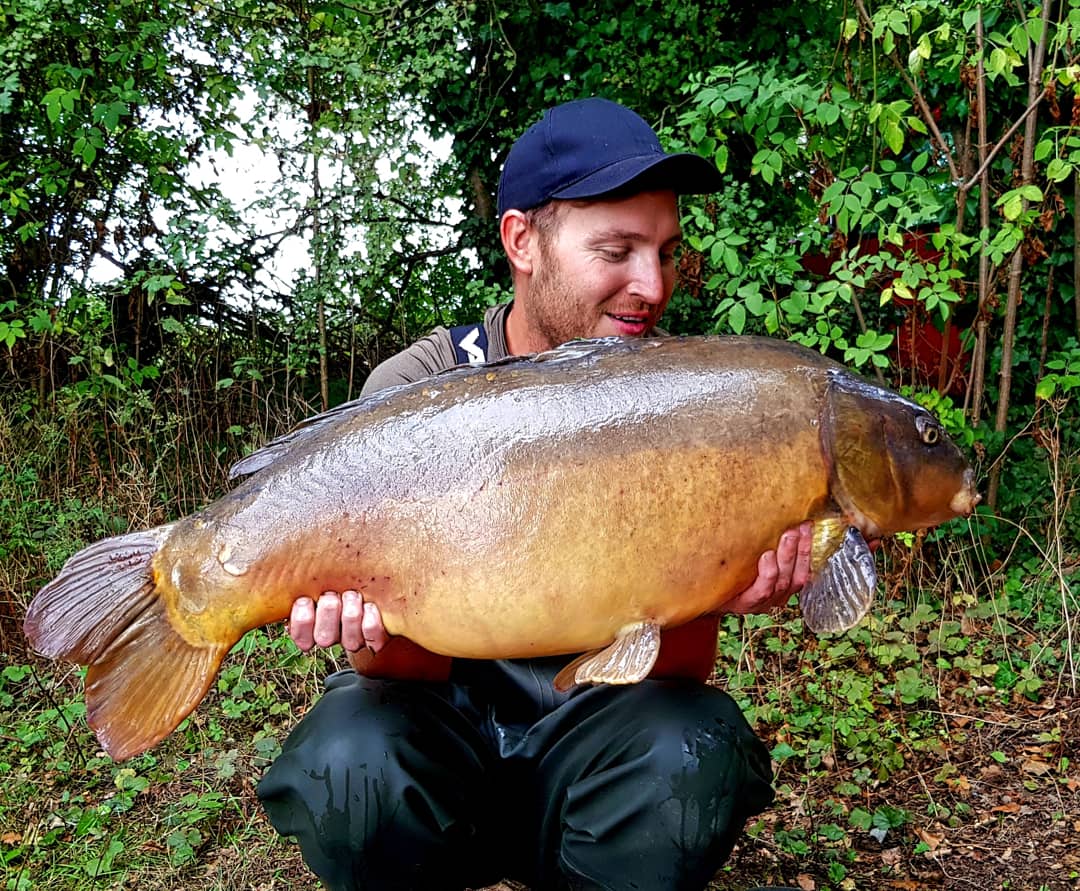 The Leather, uncaught for three years and a new PB for me

A quick social on Nick’s with Ron and John and I was soon back redoing my rods. The Leather had fallen victim to the Milky Malt wafter, so I fashioned three fresh wafter rigs all with Milky Malts on the end and sent them to the spot. I topped the spot up with another 3-4kg of hemp maize and crushed boilies and got back to playing the anxious waiting game.

While fast asleep later that night, I was abruptly awoken by the take from hell at 2am on the same rod! A battle in the dark similar to my first fish took place, with a missed netting attempt seeing the fish surge back off into the lake. I soon had a second chance a minute or two later and this time she was mine. The fish was an immaculate mid-twenty common with broad, dark shoulders, a light-coloured belly and a solid frame. I think the rush from the Leather was still coursing through my veins, as I opted against waking anybody up and instead just grabbed a few self-takes. Luckily one or two shots came out okay, but I was more than happy, as two fish on my first Lagoon session was a fantastic result. 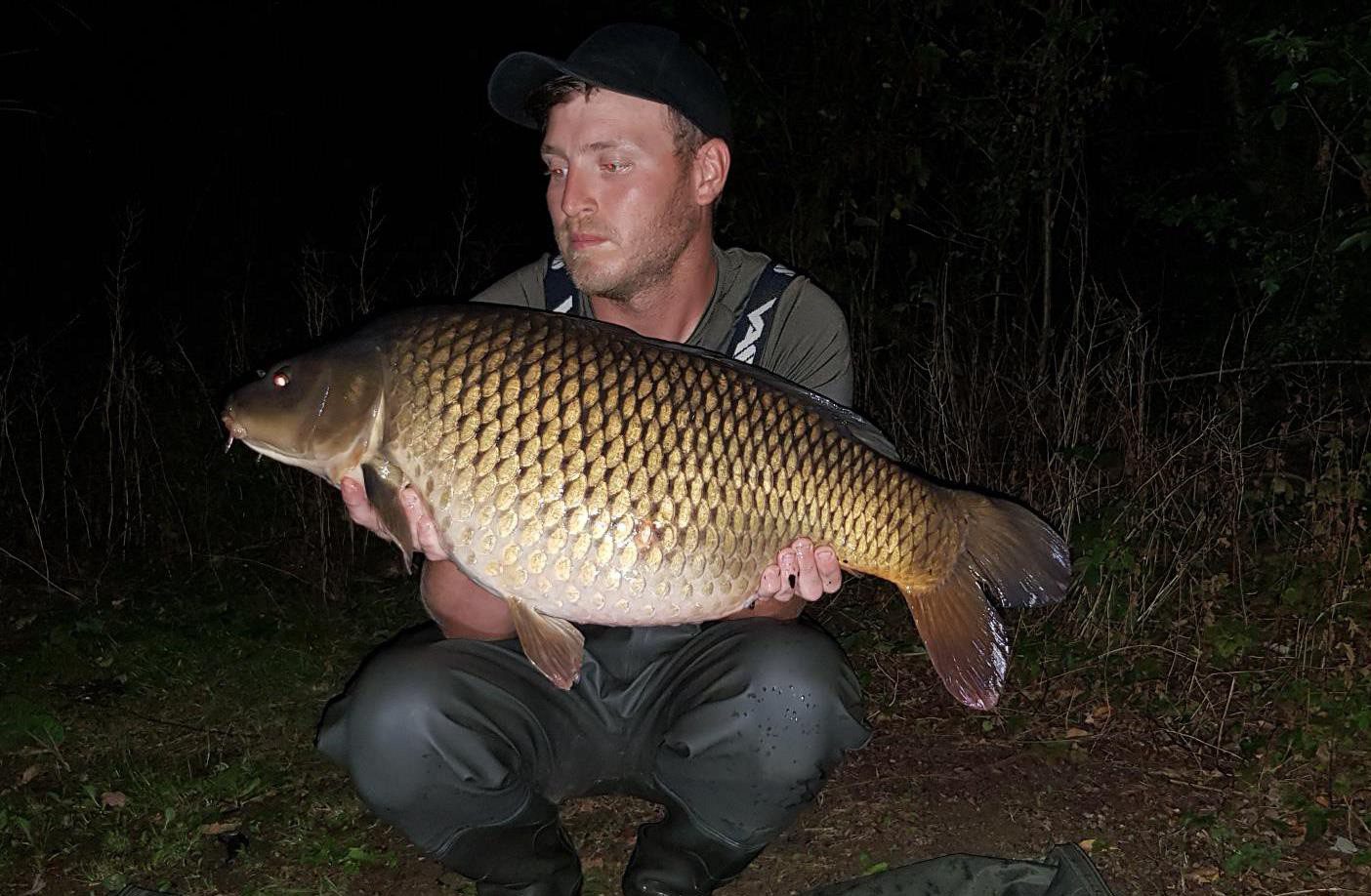 I got the rod back on the spot and gave it a couple hours until first light before topping up with bait, hoping to bag one more before heading home at midday. It wasn’t to be, as that morning went without any further action. I remember a weird sigh of relief as I skipped the last rod in across the water surface to go home. I had been so anxious the whole session, as to get a new personal best of 35lb 8oz and think another bite could happen at any time had me on edge throughout. I hardly ate or slept the entire 48 hours; I was almost a broken man setting off for home.

It was a pleasure and a joy to fish the Lagoon, so much so I’ve booked back on for the next social in a few months’ time. It had been a long time since I had wet a line at a venue that had me on edge from the moment I got there until the moment I reeled in. Well done, Gordy; you’ve got a gem of a fishery on your hands.