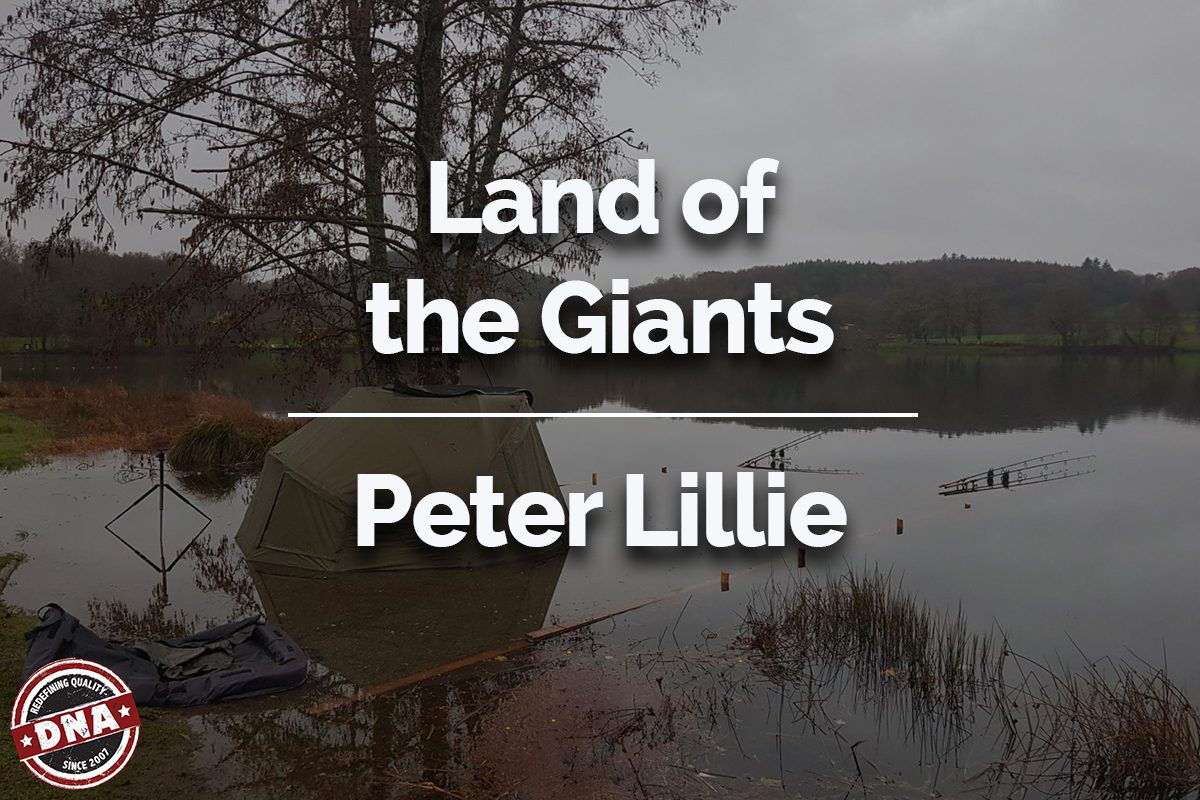 Land of the Giants

There really is something quite special about fishing for big carp in Europe, although I can never put my finger on exactly what it is. Maybe it’s the sense of adventure, the thought of what the unknown has to offer, or maybe it’s the slim possibility of catching a fish of a lifetime. Either way, I’m sure many of you have shared the sense of excitement I speak of. It’s a feeling which I’m starting to become accustomed to, as in recent years my fishing over the Channel has become more frequent, but that special feeling never dies, and my most recent trip was no different.

Throughout the winter months, mild temperatures and steady catch reports from south-east France presented an angling opportunity worth capitalising on, and just hours after first discussing the possibility, myself and angling partner, Chris Sawyer, spontaneously booked our next adventure. On the last week of February, we would return to the mighty Chateau Moulin for a week-long session. With us both having struggled here during our previous trip in the summer, we felt there was a score to be settled!

I’d been keeping a keen eye on the weather leading up to the trip and it soon become apparent the mild temperatures, which we intended to take advantage of, were due to change. To be more specific, a considerable drop in temperature and a full week of rain, hail and sleet! You name it, it was forecast. Nonetheless, we kept our spirits high and before we knew it the time had come to embark on the long journey across the Channel. After the 15-hour drive and a few close calls navigating around Paris, we finally arrived at the fishery around 3am, quickly rewarding ourselves with a few cold beers whilst gazing in awe at the photos of monstrous-sized carp which littered the club-house walls. Chateau Moulin really is the land of the giants!

Later that morning, we caught up with owners Kim and Steve and also met the two European anglers who would be joining us for the week, a Frenchman by the name of Dominic and a Dutchman called Raymond. We briefly exchanged greetings and stories of our travels over some much-needed coffee, before being joined by bailiff, Tony Davies-Patrick (aka Globetrotter) to draw for swims. Chris came out first, choosing a renowned big-fish swim called Dugout. I, on the other hand, came out last! However, with only four anglers to share 54 acres of water, I was more than happy with my remaining options and also opted for one of the well-known swims, called New Swim.

The weather forecast certainly wasn’t wrong, as Tony rushed to boat us to our swims in lashing rain and gusty 50mph winds! We were immediately off to a challenging start. The challenges I would face throughout the week soon dawned on me, as my swim was right in the face of the strong southerly wind.

After talking to Chris, it seemed we had the same mindset in that covering the large expanse of open water would be the most effective method. We both opted to fish similar tactic, using the throwing stick to create a large feeding area of S7 boilies in the hope it would keep the fish moving and actively looking for bait. Luckily for Chris, he was tucked away on the back of the wind, which certainly reflected in his angling that evening, as he was brimming with confidence having got his rods and bait out free of any trauma. I wasn’t quite radiating the same enthusiasm, as the strength of the wind had forced me to fish singles at much shorter range than I would have liked, however I assured myself of a good night’s sleep if nothing else and would be able to reassess the situation the following day.

A quiet but stormy night followed, before Chris caught three low-thirty mirrors in quick succession at first light, which I followed with my first fish, a low-thirty common, which fell to a Secret 7 Hard Hooker tipped with a PB pop-up. The fish had responded well to the hit of S7 Chris put out the previous evening and it made me wonder if I’d have caught a few more if I had baited as heavily.

I prayed for the wind to die down, but it wasn’t to be, so I moved two rods to my left, positioning them into the entrance of a bay around 90 yards out, which enabled me to use the wind to my advantage and bait the area heavily. The other two rods went back in the open-water zone on singles.

Surprisingly, the heavily baited area didn’t produce a bite that night, but come morning I was back out in the wind and rain doing battle with a low-thirty mirror, hooked out in the open-water zone. Looking up, I could also see Chris holding what looked like a piece of bent carbon, which he later informed me was one of three mirrors to 30lb. The fish were really responding well to Chris’s heavy baiting and, considering all our bites were coming from the open-water area, I suspected there was a decent number of fish out there.

Another bivvy-bound day passed before that evening my prayers were answered. The wind died down and the lake went flat calm, with a gentle trickle of misty rain. The opportunity to bait up at range finally presented itself. Chris and Raymond both found it amusing, as after days of being confined to my bivvy, I finally jumped out and proceeded to bait up like a mad man, absolutely peppering the lake’s surface with 18mm and 22mm boilies.

The relentless wind and rain soon started again and the next 24 hours passed quietly, apart from Raymond banking mirrors of 30lb and 56lb from down the other end of the lake. My lack of action came as no surprise after the hit of bait I’d put out, but I was sure it was only a matter of time before the fish started to respond.

Heading into the fourth evening, the tell-tale signs of feeding fish started to appear as oily slicks given off by the boilies soaked in S7 Liquid Food hit the surface, leaving me full of the confidence a take wasn’t far away. I didn’t have to wait long either, as hours later my alarm pierced the silence of the night after receiving a sudden drop-back from the open-water zone, resulting in a 38lb mirror. Knowing there was a chance of a couple of bites in quick succession, I wasted no time in casting the rig back out into the darkness before doing some self-takes of my prize.

Soon after the same rod was away with a steady take. Lifting into the fish, I was initially met with a solid resistance. The fish then turned and swam towards me, waiting until it neared the margin before going on numerous runs, stripping 60 yards of line from the spool and leaving me in no doubt it was a better fish. Moments later the dim light of my head torch lit the pale flank of a big mirror as it rolled over the net cord. I contacted Tony via the walkie-talkie for assistance with the weighing and photographing of the fish and we soon identified it as the Guinness Fish, weighing in at 54lb 12oz and a new personal best for me.

The Guinness Fish and a new PB for me

Before departing, Tony warned me of the stormy weather which would return in the morning. Taking his advice, I took the opportunity to stick more bait out in the still of the night and ensured I battened down the hatches ready for the coming storm. True to Tony’s word, I was once again sentenced to my bivvy for the day and imprisoned within. I was unable to see what was happening around the lake. It wasn’t until Chris rang to inform me the Frenchman, Dominic, had previously moved into the bay to my left and was well and truly getting amongst them already, landing several fish to 40lb. With this new-found knowledge, I braved the weather and recast the rods I had positioned towards that area as best I could.

Waves crashed over the bank, covering my hands in ice-cold water as I set the bobbin on the last rod, but whilst doing so, a single beep from one of the open-water rods caught my attention. I could see the tip begin to pull down as the line popped out the clip and a steady take materialised. My first impression when lifting the rod was that the fish was snagged; all I could feel was a dead weight on the end. It took a few moments to realise I wasn’t snagged at all; I was in fact just connected to a very big fish, which quickly started kiting with unstoppable power towards the bay to my left. The fish passed right over my other lines and headed around the corner for a series of buoys leading out to a metal post. The rod took on its full battle curve as I held my ground, but the line was coming into contact with the buoys, leaving me no choice but to hop over the side and make my way after it. However, the fish had other ideas and turned, heading back out into open water and straight under my other lines, forcing me to duck back under the other rods. It really was a surreal experience: I was chest-deep in water, waves were crashing into me and I was getting absolutely battered by the wind and rain, yet all the while I being towed in every direction by what was obviously an enormous carp. I’ll never forget the heart-stopping moment that huge scaly bar of gold broke the waves, spluttering water and slowly wallowing towards my waiting net. One big scoop later and she was mine. Tony identified the fish as the Patch Common and looked absolutely enormous, looking every bit of 60lb. On the scales, however, she went 59lb 2oz and was another personal best.

The Patch Common and another new PB at 59lb 2oz

Mother Nature wasn’t holding back and, as the blistery conditions continued, an age-old oak tree came crashing into the lake, and water rushed across the fields as inlet streams burst their banks. The carp didn’t mind, though, as throughout the day the action continued, with another two mirrors of 49lb and 50lb gracing the folds of my net.

The fish didn’t seem to mind the weather 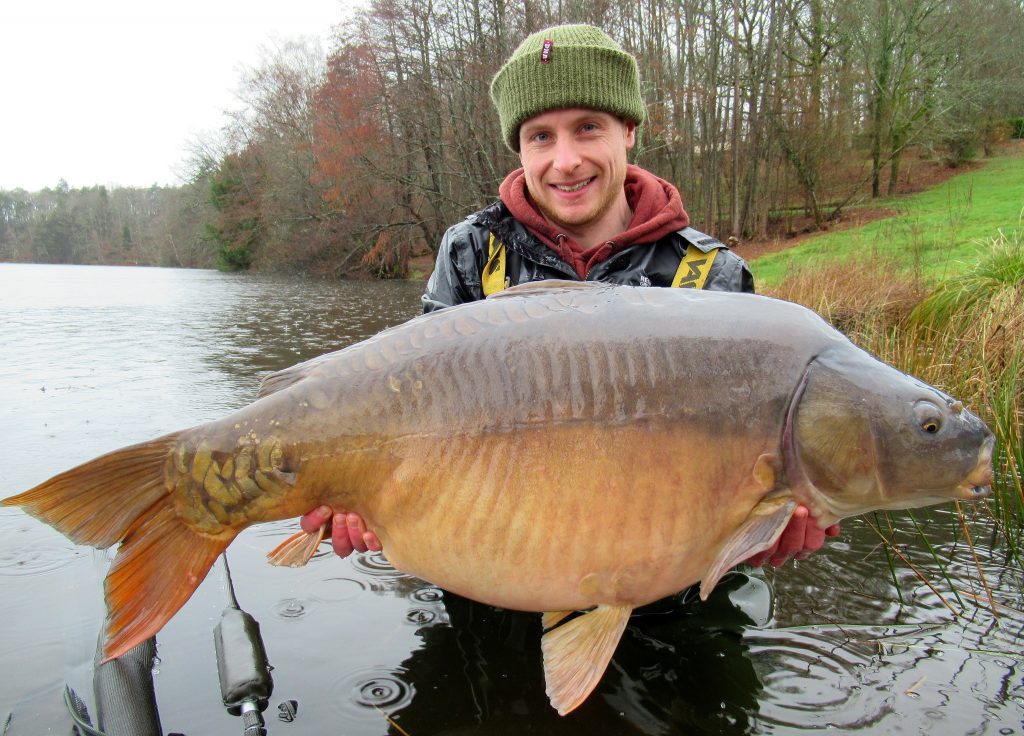 Another 50-pounder added to the tally

The fishing had been quiet on Chris’s side of the lake, but that was due to change as we went into the last 48 hours. He ended with up with 16 fish in total, with the icing on the cake being a pristine 47lb mirror and one of the lake’s real special ones, Mrs Finley at 55lb 2oz and a new personal best for Chris. 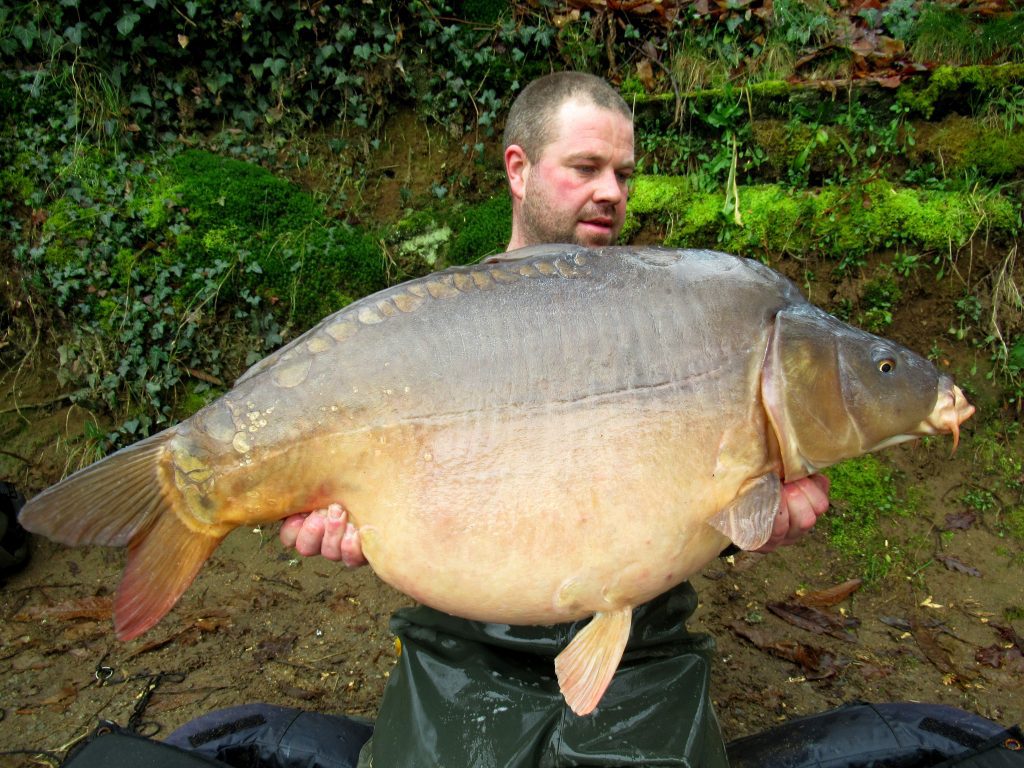 Chris finishing off in style! 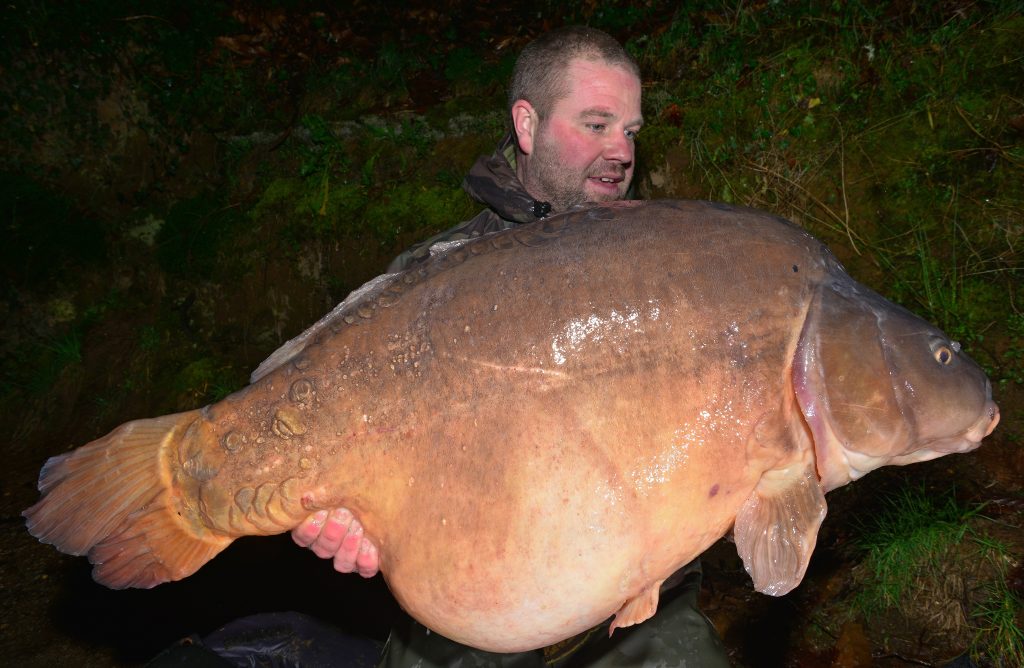 His highlight being a new personal best, Mrs Finley at 55lb 2oz

We kept poor old Tony in a wet set of clothes right till the end as the carp continued to feed. I too caught a few more fish up to 50lb, but with the inlets bursting their banks, the water level was on the rise, eventually flooding the lake. This all happened during the night, so unbeknown to us sleeping beauties, we all awoke with flooded bivvies and floating tackle boxes! Or in Raymond’s case, a bivvy full of crayfish, which really did make for a comical end to the trip. 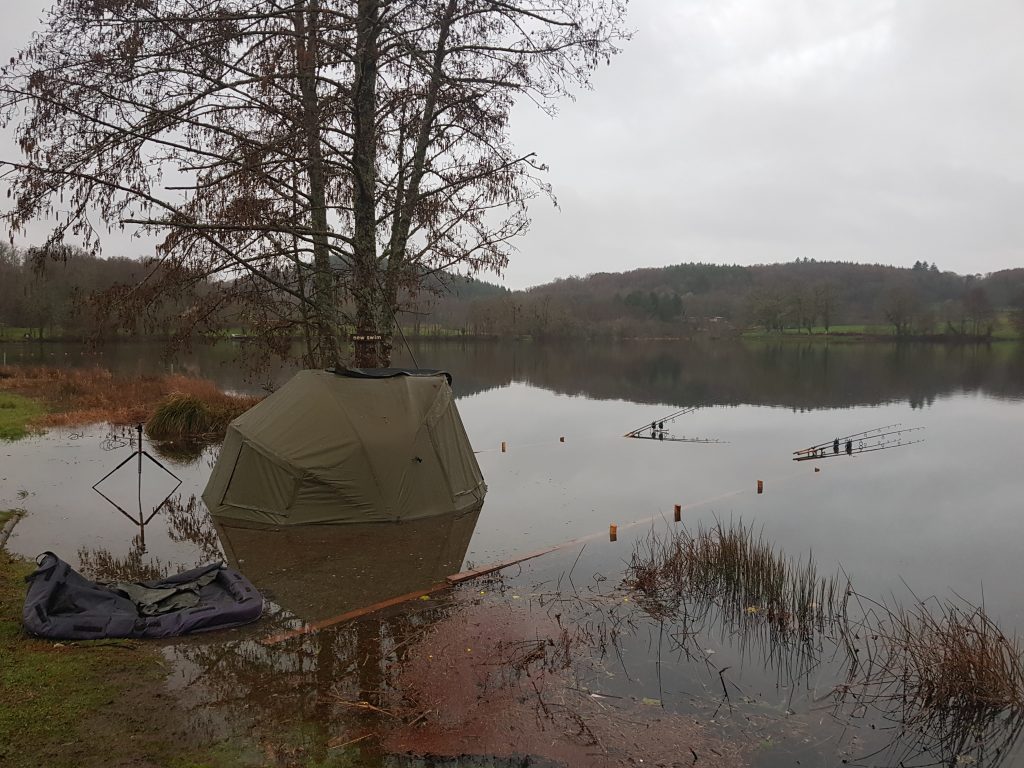 In total, Chris and I landed 25 fish between us, comprising five twenties, 12 thirties, three forties and four fives. An awesome winter result, well and truly settling the score we had with those Chateau Moulin monsters from the previous summer.