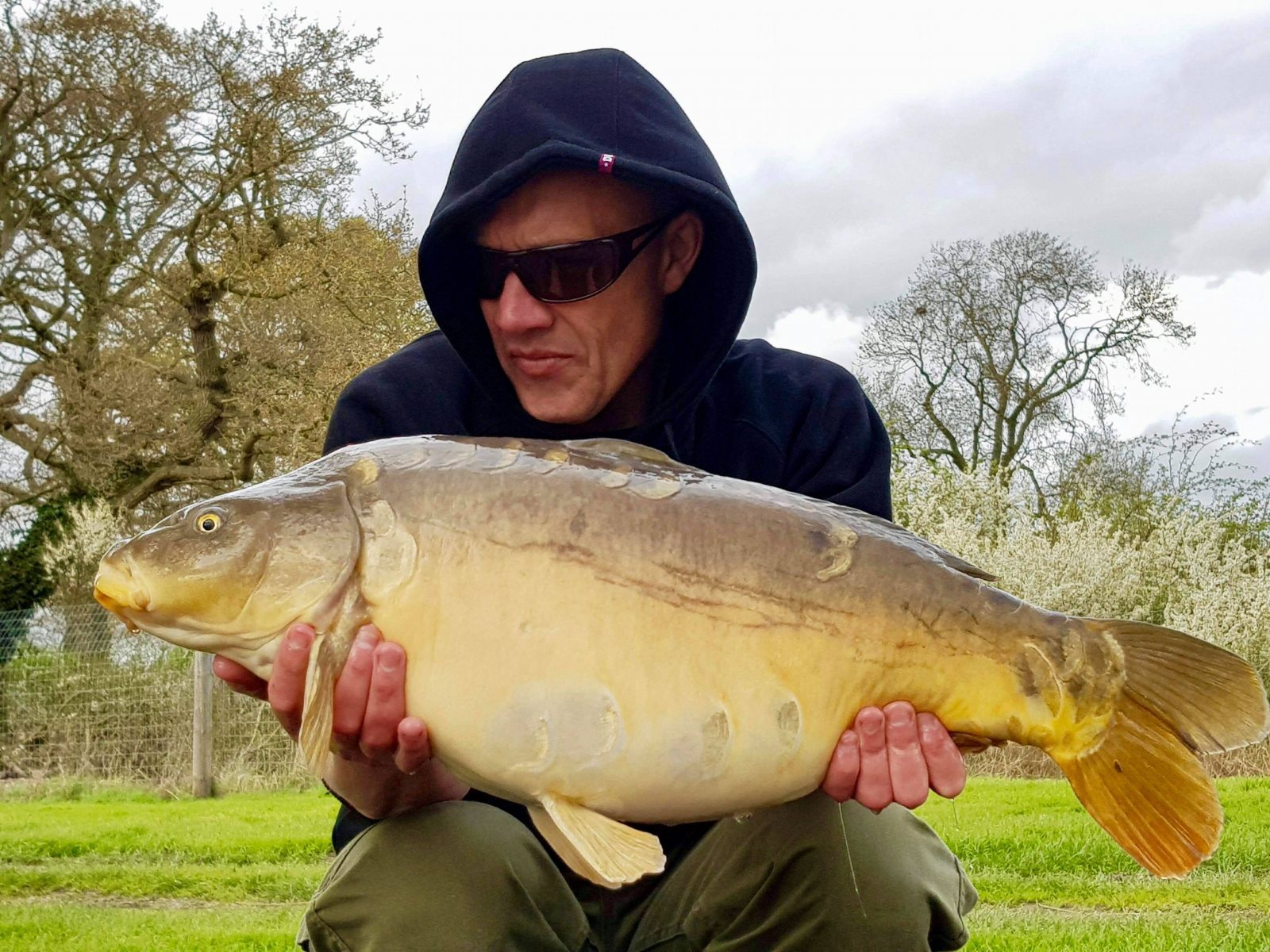 We wanted to get the DNA Open-Access Series off with a bang really. Now, to be honest, Merrington was always going to prove a more challenging prospect, with the fish being under constant pressure, plus zigs are not allowed (or that would have been the first port of call).

The pressure was on for the first DNA Open-Access shoot, and in all fairness, Merrington isn’t classed as a runs water, but with 85% of the stock over 20lb it was an exciting prospect

On arrival I managed to plot up in the middle of the lake, giving me a great viewing point, and I saw about half a dozen shows near my zone, so it was a simple case of a couple of ‘German’ wafter rigs with a Milky Malt hookbait on each and a small mesh bag of the Crayfish Mini Mix pellets for attraction purposes and to stop the rigs from tangling. Over the course of the next few hours, I got a few liners, but didn’t want to recast continually as there weren’t many shows, and the last thing I wanted to do was put anything in my water on edge that they were being fished for.

Mozza turned up after me, and once he was all set, we noticed a few shows right on the end of a freezing wind directly opposite us, which was just the club we needed. We grabbed a couple of rods and a net and legged it round there. The wind was savage if I’m being honest, but after standing in peg 12 for only a couple of minutes, we saw three fish show ever so subtly. Both rods were cast short, about 30-40 yards, and the rods laid down on the woodchip. In fairness, we were uncomfortable, and despite it being a westerly/south-westerly wind, which we all associate with warmth, it was Baltic, but after only a very short period, the left-hand reel started to spin and I was in! It was the first fish of the Series and man, I was nervous! However, after a brief tussle in the wind, and despite me managing to get the net stuck on a tree root, I bundled a good fish into the net – we were buzzing! What a result and well worth the effort; good vision and watching where the fish were caught us that fish. She weighed in at just over 21lb and was a real looker, a fantastic way to get Open Access under way. There had been a fair amount of disturbance after that and it was getting late, so we headed back round to peg five for the night ahead.

With the rods on the deck, off one went! A mega 21lb-plus Merrington mirror to kick the series off. Man alive, we were buzzing like you wouldn’t believe

A couple of the anglers who’d been on for 48 hours proved invaluable for information; they’d put a good amount of bait in and hadn’t received a bite. The weather had tailed off from the previous week and it had certainly had a knock-on effect on the catch rates, so this told me not to follow suit and pile a load of bait in. I fished my left-hand rod over the back of a plateau at 11 wraps and the right rid out towards the middle on some hard clay, which was basically where I’d seen those fish show earlier in the morning.

Bait-wise, it was minimal: three spods on the left rod and six on the right. I didn’t want to overfeed the fish, especially as nothing had been caught for two days; this would just minimise my chances of a fish actually picking up my hookbait. The mix was simple too: some oily hemp, a couple of tins of sweetcorn, some 12mm, 15mm and 18mm S7 boilies to mix up the size ratio. The key was to spod super accurately to focus all the attention on the one spot.

Rig-wise, it was wafters all the way! There’s no weed in Merrington, plus Ben, the fishery manager, had told me a lot of anglers use the hinged stiff rig, which is a brilliant rig, don’t get me wrong, but in a lake with no weed, I didn’t feel I needed a pop-up a couple of inches off the deck, so opted for a wafter sitting pretty on the bottom. Slight changes like this, or going against the norm sometimes, can be key to getting a bite or not on pressured day-ticket waters, and for me, the lake wasn’t fishing well, so it was worth trying something different to what everyone else was chucking out.

Soft coated-braid wafter rigs are very en vogue with me at present, and as long as the bites keep coming then I’m not about to change

The night came and went with only a few liners for my efforts. We didn’t see too many shows in the morning either, so around midday it was off with the two rods into peg 12 to see if we could fall on a few fish again. It seemed colder the second morning, and even the water temperature was cooler too. I’ve forgotten to say I ended up hooking a tufty too! This told me that after almost 24 hours and only six small spods of bait on my spot, the bait was still there, as the birds were hammering my spot. It was so obvious even small amounts of bait were being ignored by the carp and that bags or singles were the way to go on this particular session.

I started off on Milky Malt wafters, as that’s what had been doing all of my bites since joining DNA, but following on from Mozza’s advice, I changed to the PB’s

Nothing developed over in peg 12, but we did see a few fish nut out in another area that we could access. We gave it another hour on the end of the wind, but hunger got the better of us and we went back to base camp for some lunch and to put a couple of rods on these showing carp. The rigs were the same, but I’d changed to the PB wafters, as Mozza had been given a tip off about a couple of DNA lads catching a few on them a couple of weeks previously, so I changed over from the Milky Malts. I’m guessing the recast rods had only been out half an hour or so when the left-hand rod whipped round and we were into our second Merrington fish, which felt heavier than the first one. I played it gingerly while Mozza stuck the camera in my face to distract me! The damn fish then got stuck behind that plateau I mentioned earlier. “Please stay on, please stay on,” I kept saying. Well, stay on it did, and a dumpy but chubby mirror was soon lying safely in the folds of the net. Yes!! It was 22lb 4oz, and what a way to finish off at Merrington. One other fish came out from a new angler who dropped into peg 13 where Sean had been for 72 hours and caught nothing over bait, and guess what, the new guy had it on a bag cast towards showing fish, so great observation and great angling!

A rotund 22lb-plus mirror from open water. We worked hard for these couple of bites, especially as the cold winds had really knocked the catch rates on the water prior to our arrival

Mozza and I sussed almost straight away from the weather that it wasn’t the time to shovel in tons of bait, as they must see it time after time on Merrington. Yes, at certain times it works well, but not this time, and small bags fishing for a bite were 100% the right approach. Mozza will take all the credit for the captures, as he convinced me to change from the Milky Malts to the PBs, but team effort prevailed, I’m saying! Haha. In fairness, we got it bang on; we’d researched the captures leading up to our trip, which were poor, the weather had dropped like a stone, which wouldn’t have helped the fish’s stability, and I know if we’d have put more bait in we would have actually decreased our chances on the spots, not increased them.

Big thanks to Ben and the team at Merrington; it’s a fantastic fishery with some amazing carp to target. Probably 85% of the stock are over 20lb, with around a dozen thirties too, but these fish have seen it all over the years and at times can be cute. Luckily for Mozza and me, we out-smarted them twice, which was a damn good result given what we were up against.

See you next month!